ICU nurse at TCH one of three new COVID-19 cases 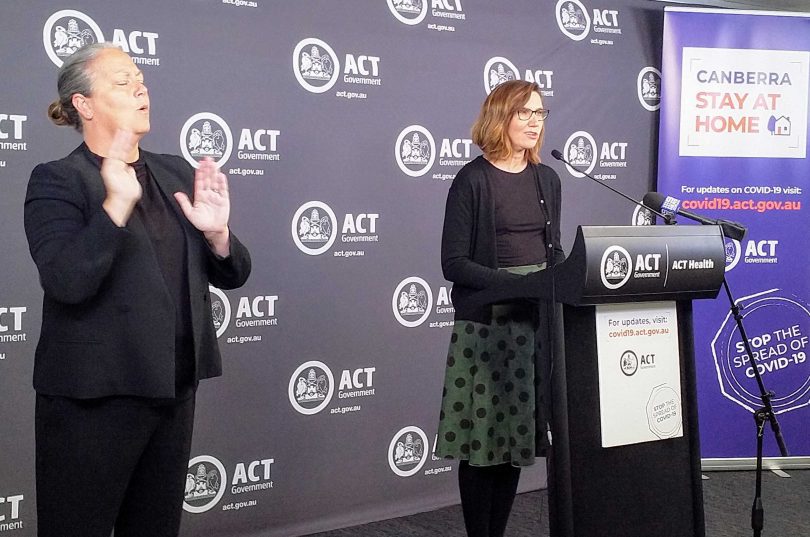 An intensive care nurse at the Canberra Hospital is the latest person to return a positive test for coronavirus in the ACT.

The acting ACT chief health officer, Dr Vanessa Johnston, said the result was confirmed after the daily reporting deadline on Thursday (9 April), so was not included in yesterday’s figures.

There have been three new cases of COVID-19 recorded in the ACT in the past 24 hours.

That brings the ACT’s total to 103 cases, of which 59 have made a full recovery and have been released from self-isolation.

Dr Johnston said contact tracing revealed the nurse most likely contracted the virus from a close household contact who had returned from overseas travel and not from within the Canberra Hospital.

Further tracing is being done on a “small number” of hospital staff who may have been in close contact with the nurse. Those staff members are now in self-isolation.

The three new confirmed cases are two females and one male, aged between 26 and 51. One is a close contact of a previously confirmed case and two are under investigation, which adds to the one case still awaiting further test results before their contact status can be determined.

There are currently four COVID-19 patients in Canberra hospitals. The remainder are isolating at home with ACT Health support.

The number of negative tests in the ACT is now more than 6,000.

With demand for testing from returned overseas travellers and close contacts of confirmed cases dropping further, ACT Health says it will continue to increase the number of random tests it is performing on other symptomatic people.

Dr Johnston said the extra testing added to the surveillance already in place to identify potential community transmission in the ACT.

“Community transmission is when we start to see a large number of locally acquired cases where a direct source of exposure cannot be identified,” Dr Johnston said.

“Although we still have three cases under investigation, we have not seen any evidence of this so far in the ACT. This is despite actively looking for it by testing members of the community who have no history of overseas travel or contact with known confirmed cases.

“For several weeks, this group has included symptomatic healthcare and aged-care workers, as well as people who live and work in high-risk settings.”

Since 6 April, additional testing has also included a random sample of people who present to designated clinics who are symptomatic but do not otherwise meet the criteria.

“With some extra capacity created by declining demand for testing from groups that meet the criteria, we are now increasing the number of random tests to give us an even better view of potentially unidentified cases,” Dr Johnston said.

The latest data for COVID-19 in the ACT is now updated daily on a dashboard released by the ACT government this week. The data categorises each case by age, gender, location and the date contracted. 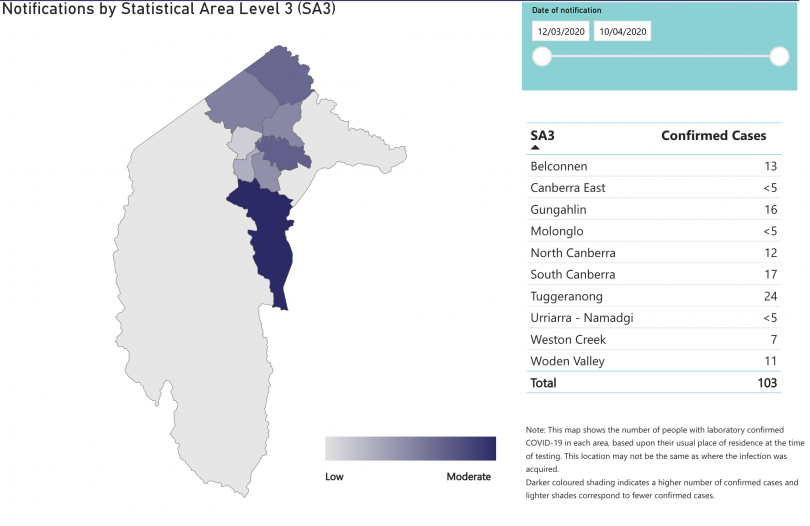 Data of positive COVID-19 cases in Canberra as of 10 April. Image: ACT Government.

It shows that Tuggeranong has almost one-quarter of the Territory’s 101 confirmed cases, with 24 people having contracted the virus. A further 17 have tested positive in South Canberra, followed by 16 in Gungahlin and 13 in Belconnen.

The dashboard is based on the person’s usual place of residence and not where they may have acquired the virus.

There is still no evidence of community transmission, with 80 per cent of cases having been acquired from overseas, and a further 14 per cent from a confirmed case in the ACT.

The largest increase of COVID-19 cases was recorded on 22 March when 11 cases were confirmed. More positively, the curve has continued to flatten since then.

The data will be updated daily and Minister for Health Rachel Stephen-Smith welcomed feedback on the data.

Bernard - 33 minutes ago
Problem ACT Government have with promotions and perceptions (possibly the realities) of conflicts of interest are nothing new... View
Property 7

keek - 60 minutes ago
Awesome news. ACT Labor and the greens really looking out for working families with their housing policies, land rates rises... View
John Mungoven - 13 hours ago
Dream of a home (ie with backyard type) is rapidly disappearing in Canberra. Local Govt policy is for 75% of new residences t... View
Andrew Whiting - 14 hours ago
Yup that’s me priced out for awhile. View
News 11

Jackie White - 1 hour ago
There's always one or two hanging around my place each year, but without fail, they wander into the neighbour's yard and her... View
Food & Wine 10

JC - 17 hours ago
Actually think you will find this “outcome” actually backs up my comments. Do you think both parties came to a $400,000 a... View
chewy14 - 18 hours ago
JC, The other week you were claiming the silence was due to pending litigation which now as we see (and I said) was false. Th... View
JC - 18 hours ago
Life doesn’t work like that. It’s quite clear that for the last year they have been in dispute with the builder over this... View
Community 20

Ben Fittler - 18 hours ago
Germaine Muller I know! Devastated he was always so nice View
News 13