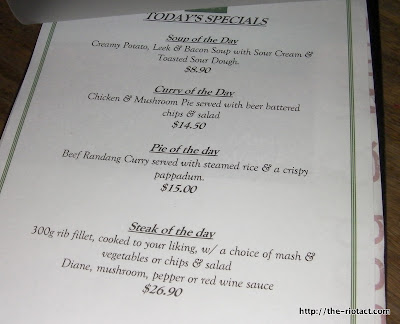 Watching the Brumbies on Friday night would have been a miserable business if not enhanced by friends and Coopers Pale Ale.

But unexpectedly the menu at O’Connor’s All Bar Nun offered a respite from the tedium of Julian Huxley’s ill considered kicking.

Chicken and mushroom pie might seem like an odd curry of the day, but a beef randang (pretty sure they meant rendang) pie with rice and a pappadam baked in? That would be a major advance on world cuisine and make no mistake!

Sadly when my curry arrived it was a watery chicken thing with no sign of a short crust.

But oh the possibilities!

Depends where and what you’ve eaten overseas. I once bought a durian paddlepop from a street vendor in Kuta thinking it was banana. On the upside, I didn’t get the runs despite eating from street vendors many times and walking the take-out pizzas back to the hotel in the rain, through streets with open sewers and floodwaters up to my knees. The ones who got sick had only eaten at nice restaurants and didn’t go for random street wanders.

Curry pie is good. I reckon I could eat that. Except would have to be a vegie curry.

Coopers? Rugby Union? Seems like your meal was the LEAST inferior product in this story.

Although Canberra has lots of restuarants, most of them seem to me to be overpriced with non-existant service, even though in many of them the food is good.

My expectations are now very low. I recently went with friends to a very well known restuarant and it took an hour to get food, wrong drinks, and bloody expensive (over $60 a head for bread, mains, and a couple of wines).

Perhaps eating overseas spoils it for those of us fortunate enough to have had that experience.

Sorry I didn’t get it!

Anna Ji - 17 minutes ago
He deserves a pedestal for his sport. His views should not impact that, especially when it's just his perceived views by one... View
Vasa Krculj - 20 minutes ago
Novak, a great sportsman and a generous human being who donated $1 mil. to the NSW bushfire victims. He must be the first spo... View
Evan James - 8 hours ago
Well said, Tim!✔ View
Community 107

Steve Aust - 46 minutes ago
Colin Parton tell 1 story here View
Louise Flint - 1 hour ago
James Daniels I was sent there for advice before I took a redundancy package. They ignored my superannuation and taxation que... View
Patrick Barrett - 5 hours ago
Dylan your fault View
News 22

@the_riotact @The_RiotACT
You're #vaccinated and #boosted, you wear a mask, socially distance, wash your hands and sanitise, but as Zoya Patel discovered, you can do all the right things and still get #COVID https://t.co/LTSsyklfol (17 minutes ago)