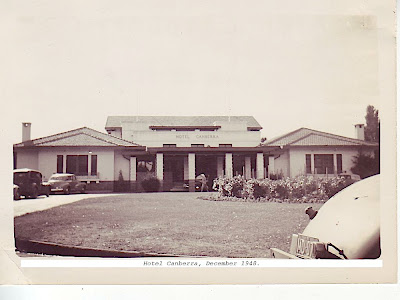 This is the 11th part of a series of photographs taken by RiotACT reader Old Canberran on his Kodak Box Brownie from 1948.

It’s Canberra’s only 5 star international hotel built in the 1920’s (opened in 1924) . It was owned and managed by the Federal Government until 1950 when Tooheys took over the lease. I remember it had a public bar out the back which served as a watering hole for the workers at Capital Hill and Hillside Hostels and anyone else who was game enough to drink there.

We had our wedding reception there in 1962 and that was one of about 3 occasions I have set foot in the place.

One of the sensible decisions in our relatively young city, keeping a historic building and extending and renovating it appropriately to continue to serve a useful purpose.
Thank you again for sharing Old Canberran 🙂

One of my favourite buildings. I love their Sunday teas, but they’re not as good as they used to be.

Finally. A place that almost looks the same as it does today.

Beth Sheargold - 32 minutes ago
Lina Haines I’ll have to see what I can do! View
Lina Haines - 8 hours ago
Beth Sheargold is like a review of Clementine Bakery please! View
Donna Butler - 10 hours ago
Lizzy Edwards and a catch up with meeeeee View
News 4

Julie Maynard - 34 minutes ago
Lin Van Oevelen and if you follow the many ‘long-haulers’, and the continued health conditions they are enduring, it is f... View
Lin Van Oevelen - 5 hours ago
Kevin Hodder It has long been known that the infection fatality rate is significantly lower than the case fatality rate. Late... View
Darron Marks - 6 hours ago
And how many people can go and get this blood test ? I would personally like to know if I have any antibodies for it ?... View
Opinion 78

Geoffrey John Randal - 1 hour ago
‘we’ is as inclusive as we can make it. View
Steve Herczeg - 1 hour ago
Really? With a name like "Progressives?" Isn't that just another mob that will continue to raise rates to fund even more dist... View
Bethany Williams - 1 hour ago
Steve Herczeg it’ll change if you elect Canberra Progressives to the cross bench to take the trough away from the snouts! View
Business 3

Nicole Vassallo - 8 hours ago
Laura yes exactly!! Lovely family that owns and built this place, and such a stunning home... 😍 View
Laura Peppas - 9 hours ago
Nicole your neighbours? 😱😍... View
News 2

Alison Gerrard - 10 hours ago
As kids, we first saw Susan Ryan in the 70s talking from a podium in Garema Place. Passionate about anti discrimination and e... View
show more show less
*Results are based on activity within last 7 days