Old whaling techniques used to save whales from entanglement 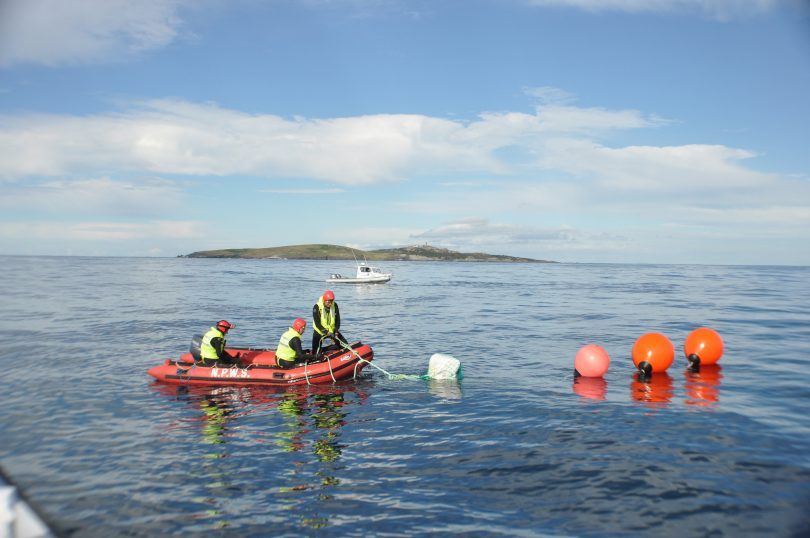 The whale migration of 2018 has been a delight, but more and more a specialist team from the National Parks and Wildlife Service (NPWS) is being called upon to untangle our mammal cousins from ropes, buoys, and fishing gear.

With increasing familiarity, whales are leaping, splashing, blowing, and singing their way up and down the New South Wales coastline headed between Antarctica in the summer months and equatorial waters in winter. That traffic brings a range of whale species into contact with man-made infrastructure that maims, suffocates, and kills.

During 2018 there were 22 whale entanglements reported to the NPWS, one more than last year. Many more are thought to slip by our headlands, jetties, and boats unnoticed. 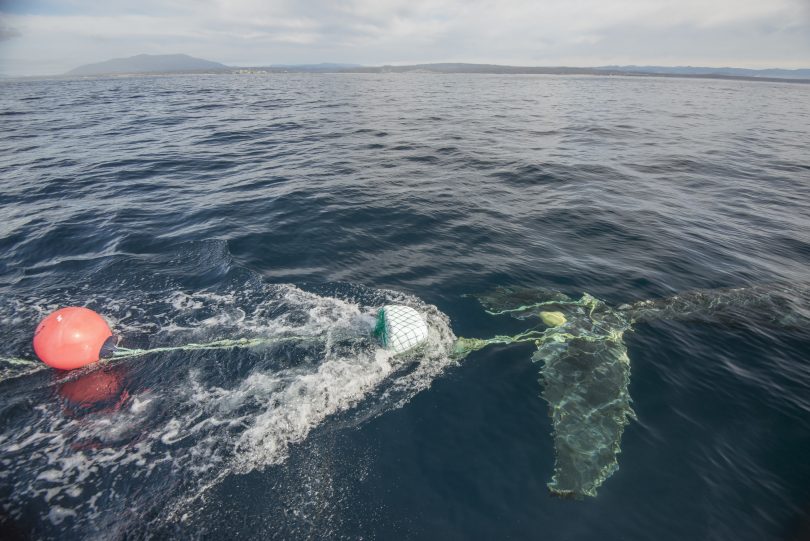 A large Humpback with fishing ropes and buoys tangled around its tail off Narooma in 2014. Photo: NSW Marine Parks, Justin Gilligan.

Bruce Gray is based in Nowra and coordinates the NPWS whale disengagement team. Bruce calls on trained staff from Wollongong to Merimbula who are ready to respond as soon as a report is made.

“It’s a great feeling when you have a whale that is entangled and you cut it free and it swims away,” Bruce says.

“It’s an ethical issue, we [people] created the entanglement and we have a responsibility to do something about it.

“These whales have been migrating up and down the coast for millennia.”

The two species Bruce and his team encounter most are Humpbacks and Southern Right Whales, big whales who simply by doing what they do, come up against ‘trip hazards’.

“Along our stretch of the coast, the predominate entanglement is associated with fishing traps and lobster pots,” he explains.

Put simply, these baited wire boxes and baskets are weighed down on the ocean floor with a rope linked to a floating buoy on the surface to mark the spot.

“The whale just swims into it, sometimes they can get stuck and fixed to that spot, other times it will grab the rope and carry it all the way to Queensland or Antarctica,” Bruce says.

“Generally what people will see is a whale dragging a buoy and a length of rope.” 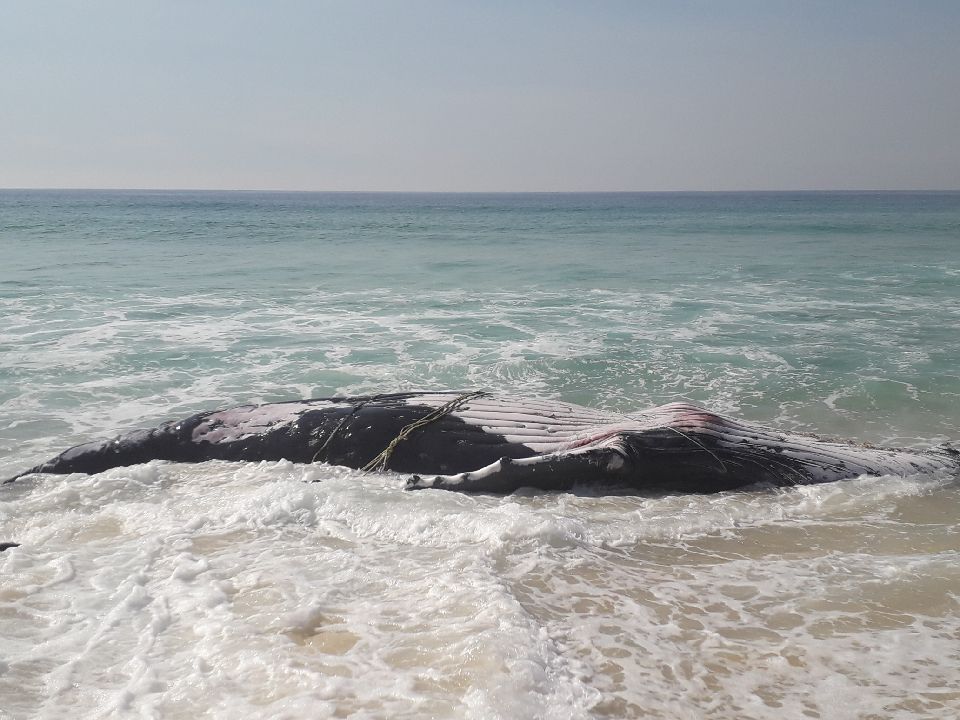 The reality of the issue washed up on Long Beach at the northern end of Ben Boyd National Park, between Pambula and Eden in September this year.

A juvenile Humpback Whale washed ashore dead, it’s pectoral fins snared in a rope buoy line which cut into its side.

“The ropes and buoys hinder how a whale can swim and how they can feed and dive and if they are there long enough it can cause severe damage and exhaustion.”

Whenever they can, Bruce and his team will drop themselves into this volatile equation to help the whale and see it swim on for decades.

“It’s a little ironic, how we undertake a disentanglement, we basically use a strategy the old whalers adopted,” he says.

“Which they call ‘kegging’ where you approach the whale and then gradually load the whale up – these days we use inflatable buoys.

“It slows the whale down and then we can undertake the disentanglement.

“It’s ironic that we use an old whaling technique – but these days its to save them.” 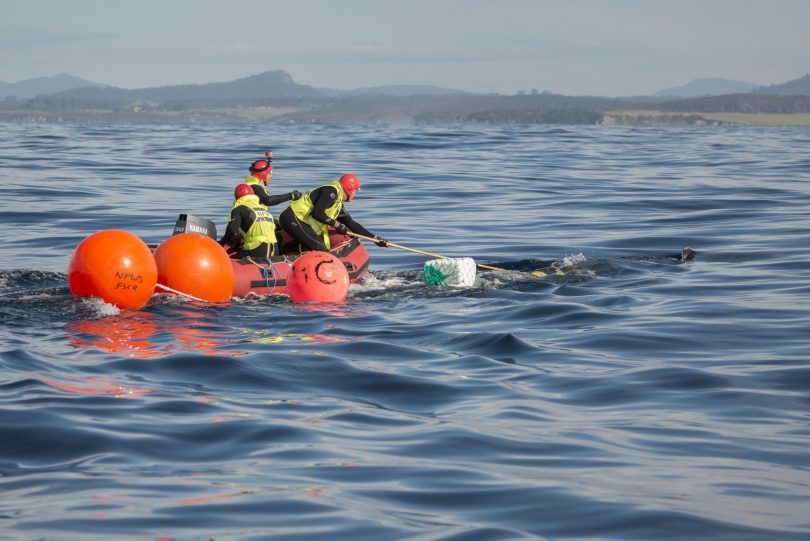 Bruce says his team never gets in the water with the whale, any approach is made from an inflatable surf boat, with specialised cutting knives used to cut away the entanglement.

Underwater GoPro cameras and flying drones are also used to assess the tangle and help map a rescue plan.

“There is certainly an element of risk to it, and we can really only carry out a disentanglement when everything aligns – the weather, the sea conditions, the light,” Bruce says.

But it’s not the disengagement itself that Bruce worries about, its finding and tracking the whales that is the hardest job of all.

“And once they get past Green Cape there is not very much we can do.” 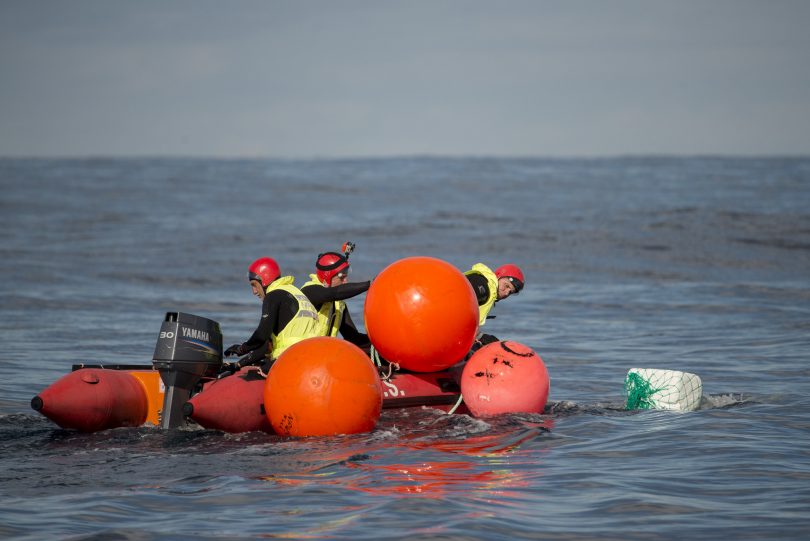 Nowra, Ulladulla, Narooma, and Merimbula are the launch pads for any local operation, with boats and aircraft deployed as part of the effort.

“If people see an entanglement the critical thing is to keep a track on where that animal is going and the direction,” Bruce says.

“Photos are also really helpful, collect as much information as possible.

“And certainly don’t get in the water, people have been killed.” 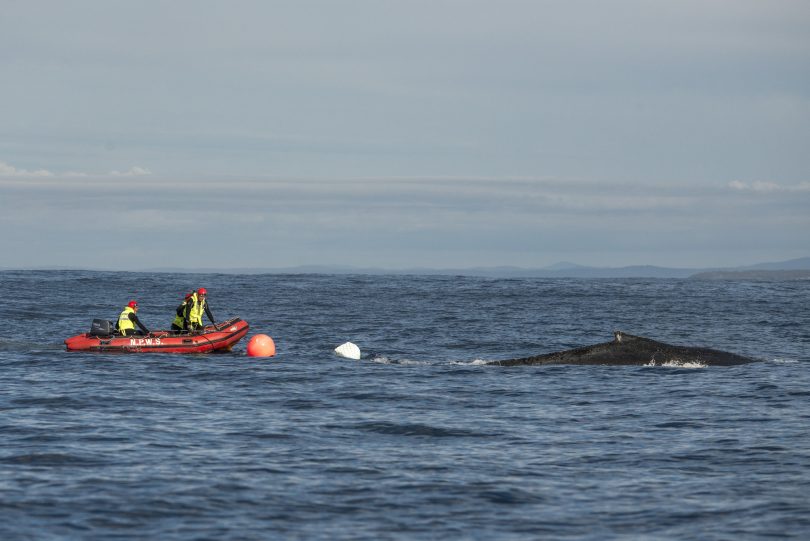 With whale populations recovering, the frequency of entanglements on the big blue highway is also increasing, but the economics and ethics tied to the issue is driving the fishing industry to modify their practices.

Identification markings from any fishing gear involved in an entanglement are reported to the Department of Primary Industries but Bruce says fines and penalties aren’t generally part of the response.

“Each fishing trap is worth about $1,000, fishers are looking at different ways of setting the traps to reduce the likelihood of entanglements taking place.”

“Whale numbers are increasing, we need to be innovative in reducing the risk.” 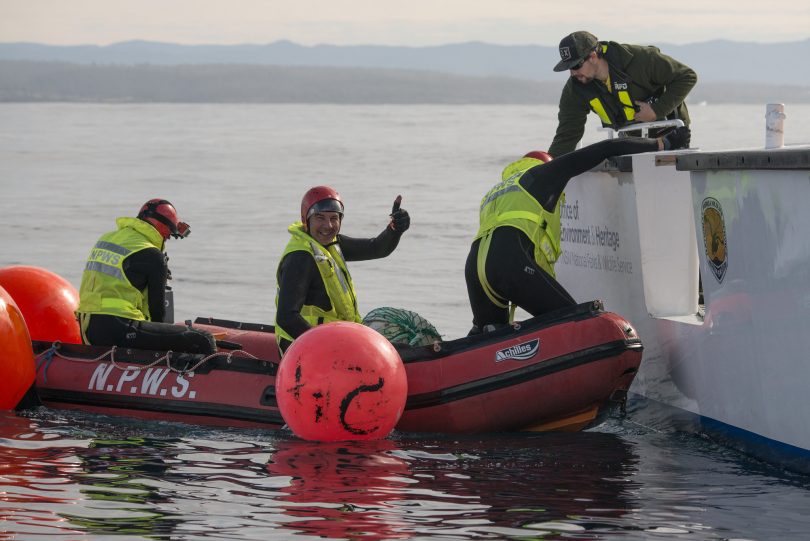 Julie Macklin - 4 hours ago
Alicia Conley The ACT has no cycle paths. They are shared paths. Yes, those around the lake were built with people on bikes i... View
chewy14 - 4 hours ago
"That they are public doesn’t mean there are no rules for using them." Exactly my point. That the rules should preclude cyc... View
Craig James - 5 hours ago
Keep riding your bicycles on the road, Darwinism at it’s finest 🤷🏼‍♂️ View
News 9

chewy14 - 4 hours ago
Nobody, Interestingly, one year later, that number is down to 100 under construction or "planned", with another 300 "proposed... View
whatwik - 10 hours ago
There's certainly a nuclear reaction from the usual suspects here any time renewables are mentioned. View
Futureproof - 10 hours ago
Nuclear - the Greens say no New hydro dams - the Greens say no Windfarms in remote areas - Bob Brown says no... View
Community 49

Juanita Tee - 5 hours ago
David Keir what are you specifically doing for them 🙃... View
Liv Miller - 6 hours ago
Rachel Edmondstone love 💓 this View
David Keir - 10 hours ago
Virginia Loizou sounds like you’re the one whinging champ View
Property 28

David Conway - 7 hours ago
Colin Ball totally not fair and they get to play grand theft auto in prison.... View
Community 8

@The_RiotACT @The_RiotACT
If you can bake a cake celebrating the decades since the 1960s, then the annual CakeOff fundraiser should be a piece of cake https://t.co/ZE6j86IEMa (6 hours ago)