On the back of a napkin: when is a contract really enforceable? 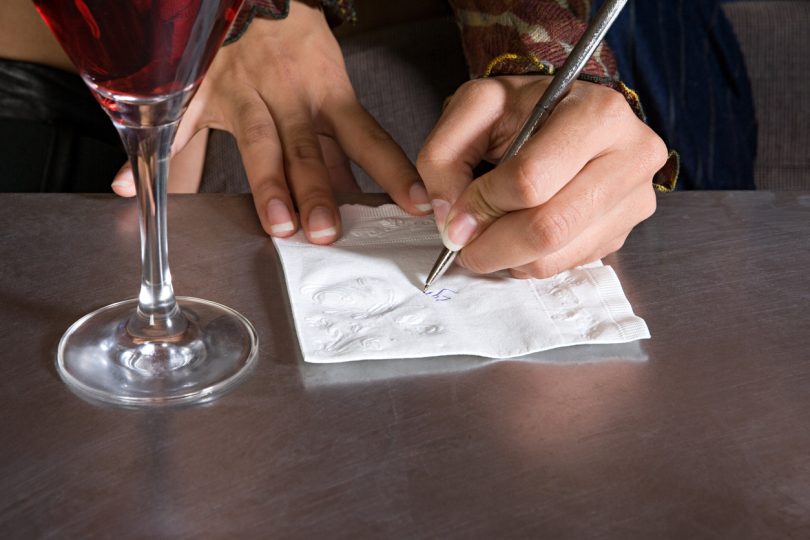 Can a scribble on a napkin be considered an enforceable contract?

It’s a Friday night, and you and your best mate are sitting at the pub having a couple of drinks. He’s telling you about his new business and lamenting that if he only had the money for a great website to promote it, he could be making a fortune by years’ end.

Knowing you’re a web developer, he asks you to do it – in exchange for a 20% stake in the business. Getting more excited about the idea, he scribbles his promise on the back of a napkin at the bar and pushes it towards you. Having always wanted to have a business of your own, you eagerly accept.

Over the next couple of months, you work every spare moment on developing the website. Your friend has a lot of design requests, but you do everything he asks for, believing it will all be worth it in the end.

After the website goes live, your friend suddenly stops calling or answering his phone. When he finally gets back to you, he makes excuses about being too busy and having lots of other problems to deal with.

Months later, you finally confront him about his promise to give you a stake in the business. He says that it was just a silly offer, and offers to pay you a small fee for having done the website instead.

Furious, you’re not sure what to do next. Surely the fact that he wrote and signed something (even if it was a napkin) has some legal standing?

This is an all-too-common scenario, and can leave the promised party in a state of anger, resentment and confusion.

So what is the legal definition of a contract, and how do you know if it’s really enforceable?

“A contract is an agreement between two or more parties to engage in a transaction,” says Christina McPherson from Baker Deane and Nutt (BD&N) Lawyers. “It generally involves one party agreeing to transfer goods, services or property to another party in return for money.”

“In theory, verbal contracts – provided they do not deal with the sale or purchase of land – are enforceable. However, in practice they are particularly difficult to enforce. This is because it is much harder to provide evidence to a court or tribunal to show that a contract was entered into when the other party either denies it or disputes its terms.”

Christina says that a contract written on a piece of paper or the back of a napkin may be enforceable, provided it does not deal with the transfer of land and satisfies the criteria of a contract.

“The piece of paper or napkin would need to clearly identify the parties to the contract. It also needs to include the transaction – i.e.: the specific good or service one party is providing, and the money, stake in the business, etc. that the other party is providing.”

If these initial requirements are met, Christina says that determining whether a contract is enforceable from there depends on:

“It is also important to appreciate that it is not always the case that a contract will be either enforceable or non-enforceable. Sometimes a clause or part of a contract, which is found to be unjust, will be struck out of a contract and the rest remains.”

To avoid creating an unenforceable contract, Christina recommends obtaining legal advice beforehand. “This is particularly important given the different statutory and regulatory requirements imposed by States and Territories. Baker Deane & Nutt has offices in the ACT and NSW and solicitors specialising in contract law in both jurisdictions.

“If you believe you have entered an enforceable contract, but the other party is reneging, you can call to arrange an appointment with one of our solicitors or partners who specialise in contract law. They can go through the contract with you, and help you determine the best way forward.”

Feedback - 21 minutes ago
The article mentions that 'The path out will resemble last year’s easing but will include working from home for some time t... View
whatwik - 2 hours ago
With the school holidays upon us, spare a thought for children and parents (and grandparents!) in Cowra, which was among area... View
Opinion 49

Tom Worthington - 22 minutes ago
Not "Man the torpedoes", it will be: "Activate the AI in the Uninhabited Underwater Vehicles". ;-) More seriously, Australia... View
chewy14 - 22 minutes ago
JC, I've repeatedly said this isn't mainly about the hardware although it helps. And why can't we strengthen our non military... View
chewy14 - 27 minutes ago
Won't be fooled, I said it helps to protect Australia. But only partly through the hardware, the bigger benefits come from th... View
News 2

Tom Worthington - 33 minutes ago
Fond memories of the old Gowrie Hostel, where I was put up as a new public servant in the early 1980s. We all congregated to... View
Property 22

The benefits of cross-cultural conveyancing

The best probate services in Canberra