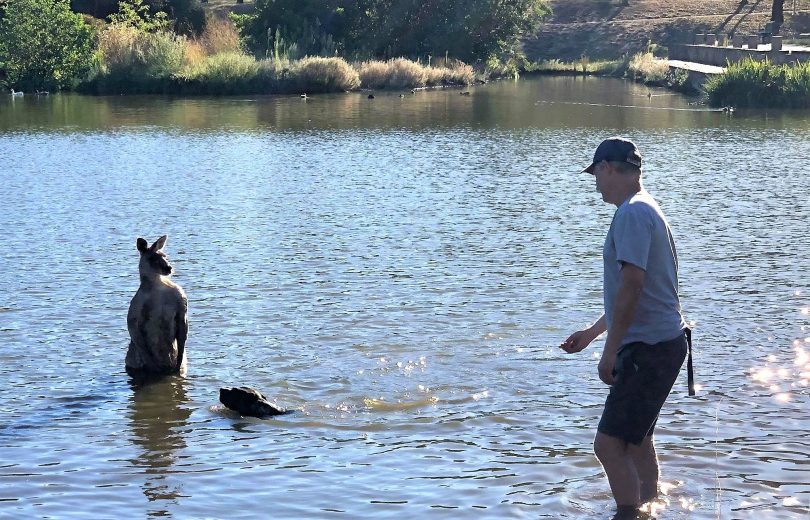 A man tries to get the dog to stop circling the kangaroo and leave the pond, without success. Photos by Jessica Tam.

A bizarre stand-off between a large kangaroo and a barking dog in a Canberra pond has been caught on video with a bevy of bystanders trying to prevent both animals from being harmed.

On Wednesday afternoon (6 March), the dog apparently bit the kangaroo’s tail and then followed it into Fadden Pond where it continually circled the kangaroo for 40 minutes barking ‘non-stop’.

However, it was taking a big risk as kangaroos have been known to drown dogs in water and this could well have been the dog’s fate if people hadn’t intervened.

In this instance, bystanders said the kangaroo appeared to be trying to protect itself rather than deliberately trying to kill the dog.

Fadden resident, Jessica Tam, videoed the strange proceedings and said the kangaroo was being “terrorized” by the dog but stood its ground. Her video (shown below) is shared from Facebook.

“The silly dog was getting tired but kept circling the poor kangaroo and barking non-stop and every now and then would get too close and the kangaroo would try and grab it or swipe at it,” Ms Tam told Region Media.

“At one stage the kangaroo dunked the dog for a second but it didn’t learn its lesson, it persisted uninjured and just as determined.

“The kangaroo didn’t seem to want to hurt the dog, it had a lot of opportunities but just stood tall and alert.” 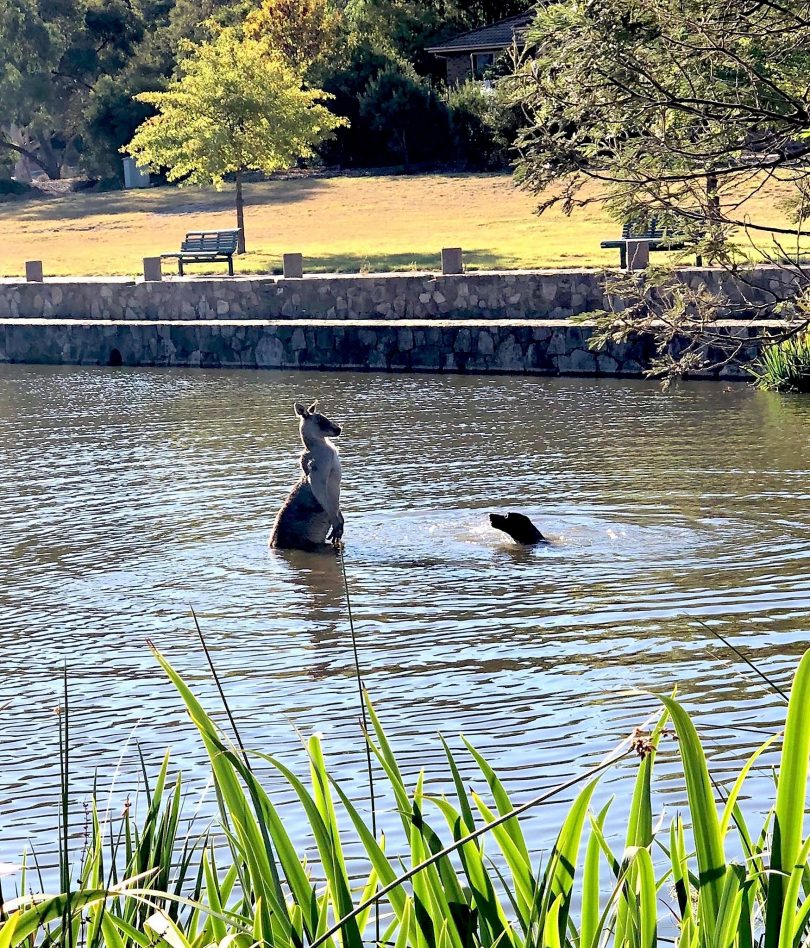 Barking non-stop, the dog circled the kangaroo in the pond for about 40 minutes.

Ms Tam said that rangers who later came to the scene – and eventually managed to get the dog away – stated that kangaroos go into the water to protect themselves and then if need be, will drown their attackers.

There have been a number of past incidents of this happening in Australia, with wildlife biologist Dr Bill Bateman from Curtin University telling ABC Radio in October 2017 that kangaroos are good swimmers and it is common for them to head into water to defend themselves against predators such as dogs.

Ms Tam lives not far from Fadden Pond and was originally alerted to the incident when her mother heard a lot of barking and they went to see what was happening.

“There was a huge kangaroo in the middle of the pond being terrorized by a dog,” Ms Tam told Region Media.

“There was a lady and a man on the edge of the water trying to call the dog out of the pond. At first, we thought it was one of their dogs but soon realised that the owners were nowhere to be seen and apparently the dog had been spotted running around Fadden over the last few days.

“The dog was circling the kangaroo barking and barking, and as scared as the poor kangaroo looked it held its ground.

“The man who was first to spot the poor kangaroo told my mum and I that he’d seen the dog chasing two kangaroos, one of them ran in one direction (it was hit by a car soon after, not sure how that one is now) and the other one went into the pond after the dog bit its tail,” Ms Tam said.

“A man who’d been walking past with his dog was brave enough to get into the water and tried for quite a while to catch the dog or separate it from the kangaroo without success. He got close but the dog was so focused on the roo that it wasn’t fazed at all.

Ms Tam said “more and more people” attempted to get the dog to come out of the pond, including a woman who tried to lure it out with barbecued chicken and a man who tried to tempt it with a pack of sausages offered from a long pool stick. 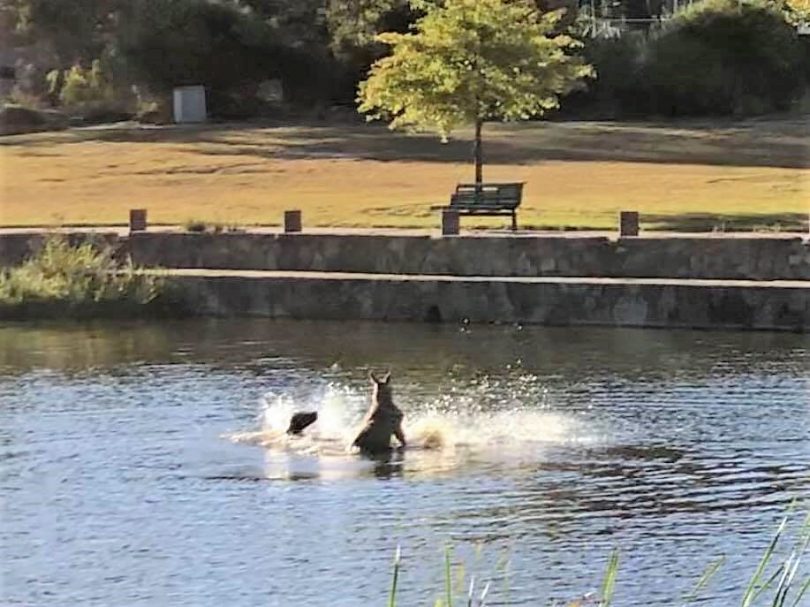 The dog is shown circling the kangaroo in Fadden Pond.

“People threw balls and whistled and tried everything for about 40 minutes,” Ms Tam said.

“Eventually the rangers turned up and one of them got into the water with a leash on a stick and pretty quickly got hold of the dog.

“It was still barking as it was put in the back of the truck ready for the pound. The kangaroo, after about 20 minutes, hopped out of the pond okay but was very stunned still.”

Ms Tam said it was a wonderful community effort to get the dog out of the pond.

Asked if she found the incident quite bizarre, Ms Tam said: “Yeah, of course. We all stood around and said ‘Only in Canberra’ and that we’d better take photos or no one will believe this ever happened.”

Hope they found dog owner and he was fined

We need dog/cat demerit points like a license. Not everyone deserves pets

Tracy, Aj. Lucky for the dog 😯

That dog is lucky the roo had the patience not to drown it.

The stupid mutt is lucky that the roo didn't drown it, which they've been known to do.

That roo was definitely playing too nice....

Some people should read it properly before they comment

Why wasn't it on a lead. Kangaroo kills dog then the owner kicks up a stink. Storm is only 5 months old but knows she is not allowed to chase them. She is happy just to watch them.

Lucky dog, it the roo got it around the head the roo would of drowned the dog, that guy should of grabbed the dog, poor roo and lucky dog.

Not "only in Canberra". This is a remarkably common scenario.

Emma... this is why you need to come down here and visit

I think that this dog is pretty lucky really. Usually, if they get near kangaroos, they are killed !

Melissa, all happening up at the pond

And we missed it! Lol you guys didnt get to do an animal rescue!

a man who tried to tempt it with a pack of sausages offered from a long pool stick. 😂😂😂

Silly owner. The roo lures the dog into the water so it can drown it to protect itself .

Kari Lyne that man wasn’t the owner. He was trying to help the roo. Read!

I doubt the Roo "was OK". They can't deal with a lot of adrenaline, so just being chased can kill them later.

From what I know the Roo was is the front yard and the dog pushed out the door to get to it. Very responsible owners from what I have seen living in the area. Sometimes these things cant be controlled.

Philip Selmes - 10 hours ago
Andy Anderson you've got no idea about traffic engineering, have you Andy? And neither do any of the people who 'liked' your... View
Dorsia Darling - 19 hours ago
I wish the cameras would also fine people who drive way under the speed limit & brake constantly for no reason coz they can't... View
Property 51

Dolla Bill - 22 hours ago
Tom rubbish together, recycle together, wheelies boys for life View
Ashley Wright - 23 hours ago
Peter Mcleod it is a dispute between a private company and its workers. Nothing to do with Andrew. View
Stephen Finnegan - 1 day ago
Fletcher Beverley Good for them. When's the last time paramedics went on strike?... View
show more show less
*Results are based on activity within last 7 days

Residents at IQ Smart Apartments in Braddon say the installation of electric vehicle (EV) chargers in their basement carpark is...
Opinion 43

The village feel is back in ‘Old’ Kingston! The beautiful suburb with its luscious treescapes and green spaces has been...
ACT Election 23

Lachlan Roberts and Genevieve Jacobs 7 May 2019 97

@The_RiotACT @The_RiotACT
Need a new furry friend in your life? Meet August and Tinkerbelle, the latest @rspcaact pets of the week https://t.co/lUZxN1PH57 (10 hours ago)

@The_RiotACT @The_RiotACT
Boasting bespoke finishes and custom joinery, this four-bedroom Flynn home is expected to be popular with buyers https://t.co/mqDrQEXbVX (11 hours ago)