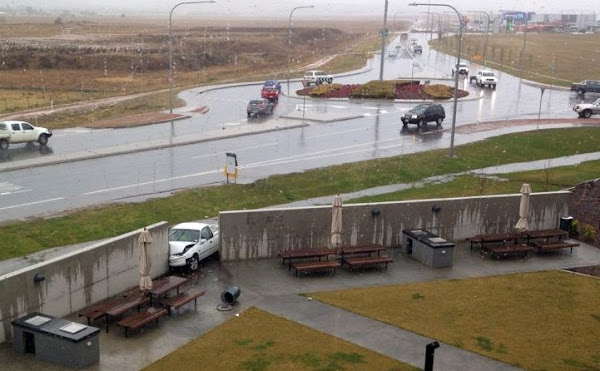 Its a double whammy:

I really don’t see this many white commodores on the road, where do they all comes from? lol. Maybe they are all just on the south side (no side-ist)

Maybe he saw the concrete wall teetering and did the civic minded thing and fixed it, just that he used his car as a prop till help could arrive.

So can you explain to us how your white ute came to rest against the concrete wall?

LOL, I wouldn’t drive a Commodore in a million years. Nice try sunshine.

the driver was obviously aiming to get his car through the gap between the concrete blocks and the car didn’t cooperate with him!!

I can say this as once in our 4wd we were heading sideways on a muddy track towards a gate, with little hope of the 4wd passing through the gate sideways. somehow the 4wd righted itself and we got through!

Interesting view from the Majura Office that day. Poor bloke looked more embarrassed than anything else.

But, I draw the line when images of accidents start getting posted, people could have been seriously hurt or died in these accidents..[oh bleh]….

How in your logic does “posting” the images, instead of taking them, have anything to do with causing the death or injury that has already been caused by what has absolutely nothing to do with the photographer? What has “respect” got to do with it, it’s a public place, there’s no law being broken so long as the photographer is not on private property, it’s not North Korea (at least not yet).

So can you explain to us how your white ute came to rest against the concrete wall?

I draw the line when images of accidents start getting posted, people could have been seriously hurt or died in these accidents.

Nup. Tool drives into wall. All on his own. Richly deserves all the ridicule we can muster, and then some.
Sure, an innocent third party would deserve sympathy, but there’s no evidence of such here.

I accept that there is something of a “slippery slope” argument to be made when it comes to posting pics of MVAs (especially when posted for our amusement). But as many people have pointed out, this one resulted all most certainly from very poor driving. There is nothing “freak” about it, only one driver appears to have been involved.

While it is possible he (or she) swerved at the last second to avoid a cute toddler holding a puppy, it seems more likely the simple over estimated their ability to drive.

I would have thought parking Costco style would be popping several vehicles into a single package. At least it should involve a bulk discount…

Heh. I commented on this stack in another thread. So many cars and trucks don’t give way at this roundabout, I’ve had to apply the horn at a few but some poor bugger heading to Costco/brand depot/work is going to get slammed. By someone driving like this idiot.

I couldn’t work out if he also took out the give way sign as you enter this roundabout, it was flattened.

There was nothing accidental about that. It was a collision between a car and a wall caused by stupidity.

I drove past that at about 1300 shortly after it happened. Powerful vehicle, light rain, slippery road, roundabout treated like a chicane. The overall result was comedy gold. The distance from the roundabout to the wall was aver 70m, and the front end was well punched into the wall, so he hit it hard. Had he been doing a remotely sensible speed as he came out of the roundabout there’s no way he would’ve got so out of shape over such a distance

Of course, had someone been walking down that path it could’ve been a tragedy. As it was, an incompetent schmuck has totalled his ride, which means he won’t be a threat to me until he can get his insurance sorted. Hopefully he only has third party property.

I was really started to get switch-over-to-another-channel bored with this meme but these last few have been friggin’ hilarious!!! (possibly not so for the poor souls doing the ‘parking’ )

Passenger: “aren’t ya gonna slow down”
Driver: “Watch this!”

But, I draw the line when images of accidents start getting posted, people could have been seriously hurt or died in these accidents. Show some respect please

clearly doing the posted limit of 60 KM/h and had properly adjusted driving to the conditions….or not

Just trying to take a shortcut to the BBQs.

Good thing that wall was there, or someone having a picnic at those tables could have been stuffed.

chewy14 - 11 hours ago
Jam, "but a lot of revenue will be brought in from the land tax/rates on the denser developments justified by the light rail"... View
bj_ACT - 15 hours ago
Can you point to why inner Canberrans are subsidising outer suburb Canberrans? The analysis I have seen has shown the opposit... View
brianf - 15 hours ago
I'm sorry Jam but successive auditors reports have failed to find any evidence of these supposed windfalls, and the whole bus... View
News 7