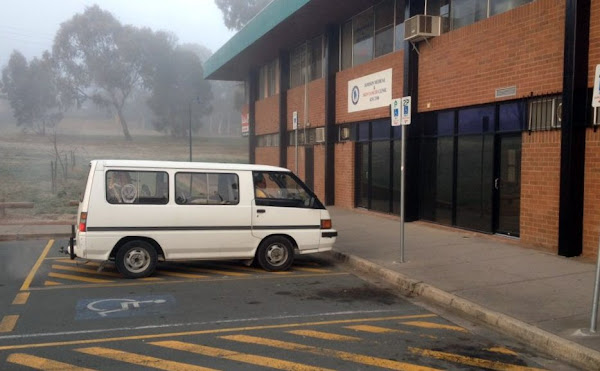 Loxmyf has sent in this excellent shot of a particularly gifted take on the ever popular disabled parking, this time at Jamison.

what’s wrong with the picture? He’s not even parked at a disabled spot

He is parked in an area that is for not parking of any vehicles. Can you see the stripey lines he has parked on?

The reason they allow such a wide berth around disabled parking spots is so the disabled drivers can easily enter and exit their vehilces.

what’s wrong with the picture? He’s not even parked at a disabled spot

Guy who delivers junk mail ’round my way uses a pram/stroller to carry his supplies. And parks it every half a street or so while walking to each letter box. He isn’t very good at putting it at the edge of the street however, and nearly gave Mrs P1 a heart attack the other week when she came round a corner and had to break hard to not hit an apparently unattended baby…

Will somebody please think of the children???

This certainly seems to be the attitude of the bloke who delivers the papers around my suburb while I’m out on my (early) morning constitutional. Never seen him use his indicator, and he likes to save a few nanoseconds by driving on the wrong side of the road if he’s turning right in the next 100m – even when he doesn’t have a clear view of the whole stretch of road.

There’s nobody much around at the time, but it would only take one car coming around a blind corner to cause a considerable amount of grief.

It looks like the crack of dawn when nobody else is around, so who cares?

“Barely any traffic around, doesn’t matter if I change lanes without looking”

“It’s early morning, so I’ll park wherever. It’s not like anyone else gets up early”

“Not much traffic around, so I’ll use both lanes in the round-a-bout.”

Instead of presuming things, how about just doing the right thing?

It looks like the crack of dawn when nobody else is around, so who cares?

Dani Hache - 3 hours ago
Whilst this is 100% accurate, it cannot be fixed with the government failing to invest in an APS workforce. These businesses... View
Bill Bloxham - 3 hours ago
Been going on since Adam was a boy View
David W Jones - 6 hours ago
Just look at the number of contractors that just keep getting extensions or renewals with no questions asked! View
News 6

jam - 3 hours ago
The tram is more easily accessed by more people as it encourages dense development within its reach. It isn’t really possib... View
bj_ACT - 4 hours ago
The issues with the Bus route changes and the loss of bus stops for Tuggeranong in 2019 were obvious to anyone with half a br... View
Winkie Wee - 5 hours ago
I'm lucky in that I live within a short walk to either the R4 or R5 buses. I use the bus quite a bit unless both of us need t... View
Breaking 4

jam - 3 hours ago
That said, though, bikes are required to slow to around 10km/h before crossing - a bike crossing at the otherwise speed limit... View
jam - 3 hours ago
It is not “bugger all inconvenience” it actually makes a big difference when it is your commute! When I drive past a cros... View
liberalsocialist - 6 hours ago
What a disgrace. And while in no way taking away from this cowardly act, I have come from NSW where we are told to dismount a... View
News 161

Jimbo Lambert - 4 hours ago
Areas in Gungahlin haven't been mowed for at least 6 months! How hard is it to use our high rates money to employ some more m... View
Jimbo Lambert - 4 hours ago
Randy Goldberg you mean 6 months later? You must live in a more affluent area than Gungahlin, as it seems we have been alloca... View
Frank Arnold - 6 hours ago
Ohhh myyy Goddd !...Crooked pavements!...pot holes in our roads!...and now it's long grass !!!! FFS we hardly had any 3/4 yea... View
Community 6

kenbehrens - 6 hours ago
That makes no sense. Your comparisons are 20-25 years apart. The "new" bus route takes longer because it services a bigger ar... View
bj_ACT - 7 hours ago
Not sure about the adding 10 minutes to the 333 journey by changing to go past College St and UC. The change Only added 1.2km... View
michael quirk - 12 hours ago
Yes,but it is by no means certain that light rail stimulates urban redevelopment more than BRT. Much depends on design of the... View
News 1