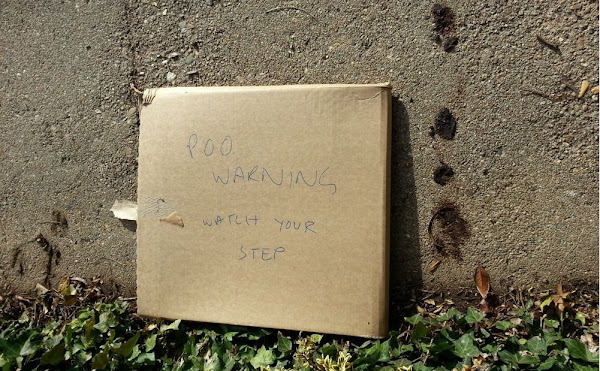 An investigation by ACT Poolicing continues into a string of incidents in the leafy suburb of Ainslie, committed by a criminal mastermind people have dubbed ‘the Ainslie Sh!tter’.

Last month, Poolice assured the Neighbourhood watch that an arrest had been made of the suspected night-time street defecator, inflicting his reign of terror on local residents for nearly a year. However Poolice Officers from Civic station are once again gathering ‘evidence’ left at scenes. It is quite clear that the poopetrator has been let out on parole, and is thumbing his nose at the law. This is yet another example of the over-lenient ACT judiciary.

The Attorney General Simon Corbell has confirmed that he is considering revising the 2013-14 ACT Poolicing Purchase Agreement to include this threat.

“We simply cannot have people behaving like this in Ainslie. Charnwood, Jerrabomberra, Tuggeranong, sure. Maybe even Oaks Estate. And I could understand this happening in Crace or Bruce, given the quality of housing developments there. But Ainslie? Nup. I promise that ACT Poolicing will pinch this poopetrator before he pinches off again” Simon Corbell said.

Forensic experts have been boweled over by the scope of these crimes.

Despite the poopetrator still evading capture, ACT Poolicing have denied that they are merely ‘going through the motions’ and not attempting to catch the offender.

Senior Sergeant Colon Pincher said, “All options are on the table to end this reign of terror. This includes scrambling the Territory’s highly-decorated TAMS roo-killer death-squad. They may not be the SAS, but they’re the best we’ve got.”

ACT Poolicing are appealing to the Ainslie community for any leads to assist the taskforce. Tip-offs can be made to Grime Stoppers on 1800 EEW YUK (339 985).

[ED – It’s possible this story is not entirely serious.]

The Chronicle has just investigated this story and advised that the police are aware of the offender and are working with mental health services to try to prevent further incidents.

Meanwhile, the offender continues to do his/her thing (twice in the last fortnight around the top end of Chisholm Street).

How long must we put up with this crap!

To catch a criminal mastermind such as the mysterious and disturbed Ainslie S***ter, ACT Poolice would indeed need to “go through the motions” as that is where the crucial DNA evidence is.

No wonder Quaedvleig quit the force…

And imagine the evidence being used in open court!

Come come you two,of course I was merely gagging..

That’s not what you said last time…

Whatever the case may be, the line about “going through the motions” is beyond gold. 🙂

They defecately need to poovide more resourcing against this excrement.

Had two hot Indian affairs last night and my chilli bum is intense.

How long until there is a copy-scat?

The three investigating officers have divided the search area equally among themselves. Each will need to search thirty three and a turd percent.

the words “flushed with success” come to mind!

Ainslie is too effluent an area to put up with this nonsense.

I can’t believe that the poopetrator has not been deturd.

Kristine Evans - 7 hours ago
Andrew Barr Then you need to let parents into schools before this happens. View
Christopher Marlowe - 10 hours ago
Jenna Vdv that's why HECS/HELP exists View
Rod Phillips - 11 hours ago
I'd like to see a bit more planning and less guessing all round! We've seen the impact of poor quarantine procedures through... View
Opinion 7

dolphin - 10 hours ago
its not hard jwinston, just look at the libs and you understand why. they are just too socially conservative for most of us.... View
HiddenDragon - 11 hours ago
"....The question now is making it work and be accessible to as many Canberrans as possible..." No, Zed, the question is and... View
ChrisinTurner - 14 hours ago
A contribution of less than 1% towards the LR network won't go far. However this amount would be against the advice of Infras... View
News 2

HiddenDragon - 11 hours ago
This monstrosity will entail major and protracted disruptions to traffic, which won't help what already looks like a struggli... View
News 6

bryansworld - 18 hours ago
However, this would create a signal for new suppliers to enter the market and undercut the original ones who are trying to go... View
keek - 20 hours ago
Great way to ensure the prices of these things all rise very sharply once suppliers know there is an easy 15 grand in it for... View
Food & Wine 2

Ol L - 20 hours ago
When COVID 19 blows over most will rush back overseas. Hope there’s no COVID 20 or they will all want to rush back here aga... View
Community 1

Ol L - 22 hours ago
Brindabella s? Would look like nothing recognisable as there hardly the Himalayas View
Food & Wine 1

Meet the first woman to play 200 games for Ainslie Tricolours

A renovated Ainslie original in step with city’s renewal

@The_RiotACT @The_RiotACT
Time for a move to the country? This eye-catching property in beautiful Mittagong has veggie gardens, a chook yard + plenty of space for the kids & pets https://t.co/EYBCG1UNb1 (59 minutes ago)