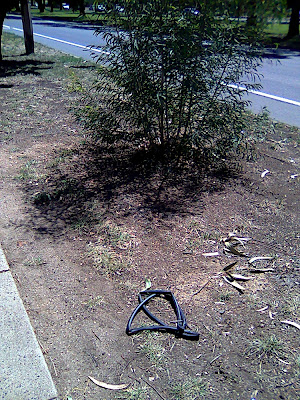 Spotted this from my bicycle on the nature strip of Northbourne Ave a bit up from Space if I recall correctly. This kind of unthinking rubbishing of the landscape is typical of a small number of the lycra brigade who cannot be bothered to take their detritus with them but no doubt would scoff and point and anyone doing the same with a Maccas bag.

The valve is a Presta style, normally used by the lycra warriors, rather than the ordinary car type of valve used by the casual cyclist.

Pathetic really, cyclists normally pride ourselves on being environmentally conscious, but obviously not this self-absorbed specimen.

Reminds me of the old saying when it comes to bike stuff: Strong, Light, Cheap. Pick any two.

I roll on prestas and ride a hybrid – Reason being is that my rims are built to withstand +110 PSI. Prestas were invented so that you have more structural integrity on a thin rim, because the valve stem is considerably thinner than schraeder (Your typical car valve)

Higher PSI = lower rolling resistance – v/improtant for a +100kg dude like me.

Not everyone who rolls on prestas is some kind of closed mind elitist tool.

Standard practise for me is to carry a ready to inflate spare tube and if I get a puncture is a straight up swap and pump w/ a C02 canister without any need for roadside puncture repair. The flat tube replaces the good one in my spares saddle pack and gets repaired on arrival at my destination.

Now that I roll on continetal gatorskins, I am yet to have a puncture on my daily ngunnawal-braddon-ngunnawal commutes. It used to be every 60km or so, and twice in 16km on occasions. Maybe these road cyclists need to sactifice a little bit of weight* for reliability

typical of a small number

.. and the detector becomes the emitter! It’s a shame that you had to spoilt it with this contradiction.

I actually agree with you trollsniffer. It’s bad enough having slobs throwing crap out of cars, without cyclists undoing the work that’s been put into cycle advocacy. All my cycle circles, roadie and mtb, frown on discarded tubes.

Judging from the thin presta tube it’s been left by some wnker roadie cursing at all the broken glass that’s ruined his Very Important training, who then decides that an act of contempt should be met with another act of contempt. As he obviously doesn’t like to patch, I’m sure karma will catch up with him and he will have forgotten to replace the spare when the next puncture comes along. Hopefully that will be past Tidbinbilla.

In the meantime, trollsniffer, a word of advice. If you want people to remained tuned to a post related to cycling, drop the lycra BS. It’s not elitist, many casual cyclists wear it, and if we all thought it looked cool we’d wear it to the pub. It’s functional, comfortable, and safer than loose clothing. Be at peace with that fact.

The cyclist probably forgot to pick it up. Better to assume “no environmental malice intended”. Or perhaps it was dropped by a non-cyclist who was carrying it somewhere, for some purpose. I can think of several uses for a bicycle tube. In fact, if I had come across it on a nature strip I could well have been pleased with the opportunity.

Well, that settles it then: all cyclists are obviously vicious sociopaths.

I wonder if it rained on Troll-Sniffer’s wedding day.

Here we go again. Rioters taking the “bait” from the “baitee” so much that I wait (“albeit” other chores) with “bated breath” for the weekly slanging “cycle”. This topic is so close to being “deflated” of interest, that we should just “dispose of” the topic thoughtfully!

Oh my God. Litter. That’s almost unheard of in this city.

I choose to believe it is a charming balloon animal and there is a 5 year old somewhere crying cause he lost his toy.

We all have read these issues countless times. Bikers V Cars, Southsiders V Northsiders, Canberrans V The rest of planet earth. Can we halt more posts where topics have already been discussed and where similar comments are repeated?

I rode a bike once… true story…

well did you pick it up and bin it?? or leave it for your type of specimen stare and point then take a photo and keep walking and then start one of the most pathetic threads I have ever seen

There’s a plastic bag on the side of the road near me.

I think you should have put a filter over the camera lens to make the photograph look cool and grungy. Problem solved!

I wonder how many cigarette butts are visible in the full resolution version of that image.

On making our exit from the roundabout that has the road works onto the bridge. We had to dodge a cardboard box that had what looked like bike tyre tubes on the road.

I think this would be even slightly relevant if it wasn’t possible to walk to a major road anywhere in the country, randomly point a camera at it and find that the resulting image didn’t have some bit of crap in it that fell off (or out of) a car or truck. Close but no cigar.

I use old inner tubes as tie downs in the back of my ute. I lost one today along northborne. Oops sorry.

Ooh let me have a go too.

Every time I cycle to work I have to dodge broken glass bottles smashed along the side of the road. “This kind of unthinking rubbishing of the landscape is typical of a small number of the car drivers brigade who cannot be bothered to take their detritus with them”.

Bob Jones - 5 hours ago
Deb Wheare And Lynne Meredith... I've heard because of the more right someone who identifys as being an Aboriginal or Torres... View
Kev Martin - 15 hours ago
I find If you stop breaking the law, you don't get locked up View
Deb Wheare - 1 day ago
Jacob Torresan face palm View
Property 14

Pari Gilmour - 16 hours ago
I support a burnout pad. Zero interest myself but obviously these guys need a social space to do their thing. Happy to suppor... View
Opinion 33

Undercover cops to target motorists not giving space to cyclists

@The_RiotACT @The_RiotACT
Cicadas provide the soundtrack to a Canberra summer, and this year they're here in droves. Have you heard the redeye or the double drummer? https://t.co/KFM1KPoNGL (50 minutes ago)

@The_RiotACT @The_RiotACT
For the fourth year in a row, the Toyota Corolla has taken out first place in the top ten vehicles bought in Canberra. Did your car make the list? https://t.co/rsV9yLItXn (2 hours ago)