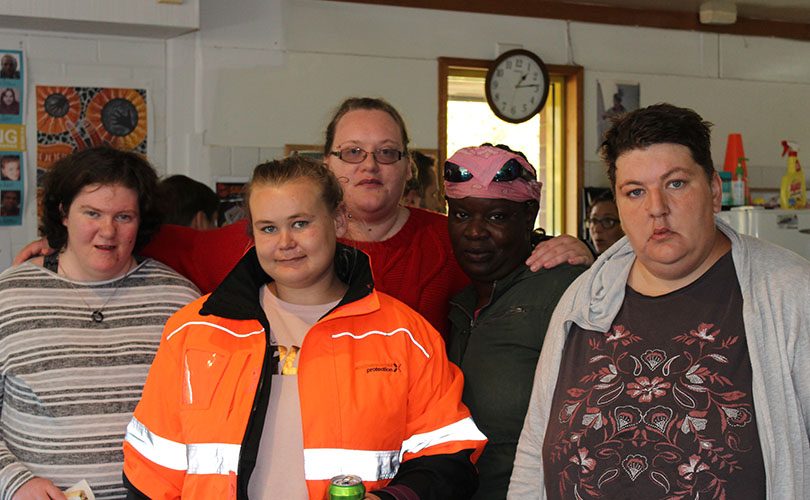 Clients and Woden Community Service staff came together for lunch and shared their experiences of the NDIS.

It was wet and windy outside, but in the room at Woden Community Service (WCS) it was warm and friendly as people receiving support through the National Disability Insurance Scheme (NDIS) and WCS staff supporting them gathered for lunch recently.

The group regularly comes together to share lunch on a Friday, but this day WCS is joining other disability service providers around Australia to call for a better NDIS as part of a national day of action in the lead-up to the federal election. They are also there to share their experiences of the NDIS. 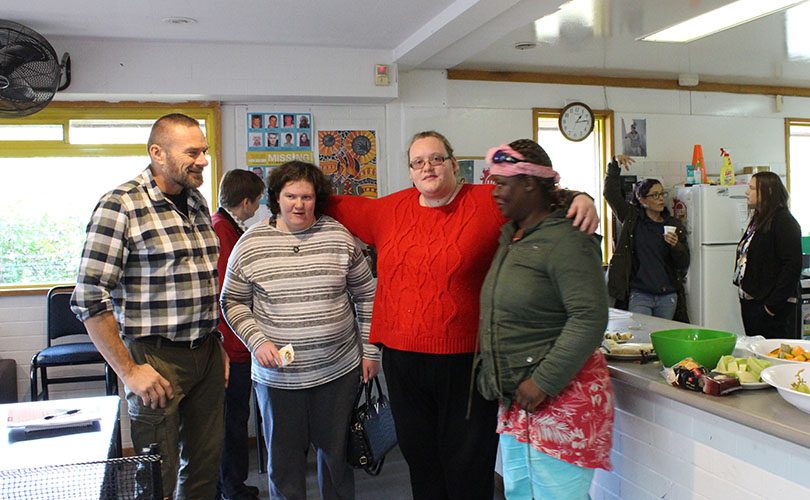 Gavin Reid, left, Lauren, second from right, and other participants who regularly attend a lunch on Fridays at WCS.

Lauren came to the WCS three years ago after a rough time in and out of hospital. WCS NDIS Support Coordinator Gavin Reid, who helps clients navigate the system and liaises with the agency, was assigned to her case under her first NDIS plan.

Unfortunately, Lauren’s plan was reviewed without her being informed or understanding what was taking place, and the second plan did not include funding for support coordination. Lauren, who lives with her elderly grandparents, was left to take care of her own plan.

In reality, this meant Gavin continued to receive regular calls for help from Lauren and her grandmother, who was not always able to support her. 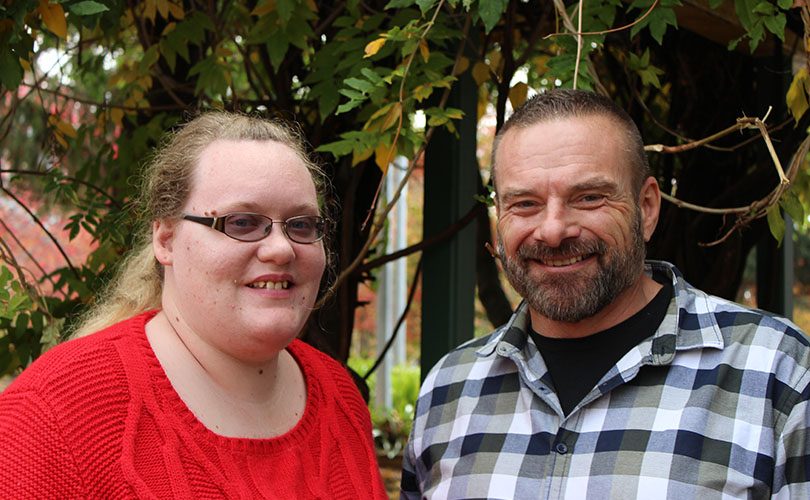 “I ended up doing a lot of unpaid work, because there was no way I could claim the time from NDIS. Things needed to be done and there was no one else. They couldn’t do it, they didn’t know how to do it and so of course we just did it,” Gavin said.

Fortunately, with lots of strong advocacy, Lauren’s new plan, now in its third year, has restored funding for support coordination and WCS is again able to receive funding for the time Gavin spends helping her.

In Kate’s case, her parents are elderly and her dad is sick, so she had relied on NDIS to provide the high level of support she needs.

Unfortunately, Kate lost the support she was receiving when the NDIS conducted a review by telephone late last year and failed to capture all of the information required to assess her situation.

As a result, Kate was cut back to only one group activity, two individual shifts a week and no support coordination. Kate has since gone into supported living because her needs were too complex to remain at home, and the other supports remain significantly reduced.

WCS has helped Kate and her family to make a request to review her plan, but three and half months later there is still no response from the NDIS.

Two-year struggle to get a good NDIS plan

It has taken two years to get a plan that meets the needs of Damien. After receiving additional funding to compile a detailed report explaining his case, Damien’s funding went from $16,000 per year in the first two years to $85,000 in this his third year, illustrating how his situation was not properly understood at the start.

“The new plan includes enough support to get me through to the end of the year, instead of getting to within three months of the end of the plan and there is nothing left. I wasn’t able to see a support worker or any of that sort of stuff,” Damien said.

With his new plan, Damien is now able to work with specialist support on developing strategies to cope with his reactions to different situations. He is also able to receive an adequate level of support coordination for the first time.

Gavin said that some of his participants who might spend up to three months a year in hospital were allocated at most one hour a week with him as a support coordinator. “Damien is my only participant with an adequate amount of support coordination included in his plan,” he said. 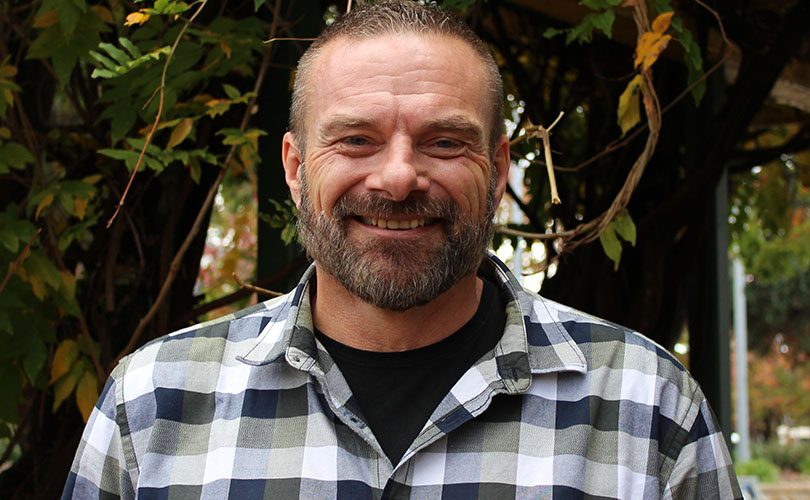 WCS Support Coordinator Gavin Reid: Damien is my only client with enough hours for coordination support included in his plan.

For Damien, support coordination has been life-saving. “Without the hours of support that I have had, I don’t know if I would still be here. It’s that simple,” he said. “It’s just a pity it took such a fight to get there.”

WCS NDIS Manager Leanne Heald says that too many people still aren’t getting the support they need because of problems with the way the NDIS is being implemented.

“Every week we are helping people who find their plans changed or cut back often with no explanation and even when it is clear they require ongoing support,” she said.

“We are 100 per cent committed to making NDIS work for people with a disability or mental illness, their families, for our staff and for our organisation. The NDIS is a great social reform and we must deliver on its promise.”

The Woden Community Service provides support coordination and/or direct service support to 150 participants. Of these, about 25 per cent are experiencing difficulties with their plans, particularly for those requiring psycho-social supports.

To find out about NDIS support coordination or direct support services available from the Woden Community Service contact the Community Intake Coordinator on (02) 6282 2644 or email ndis@wcs.org.au 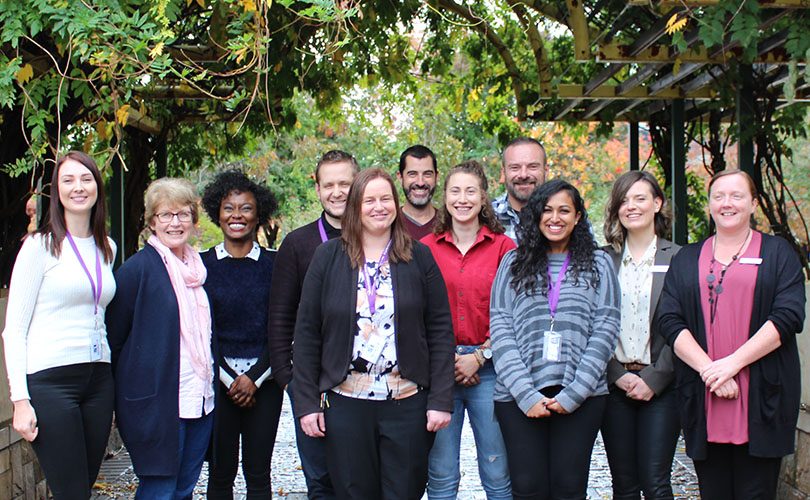 I have decided not to go anywhere near NDIS because the support I might receive isn't worth the hassle of dealing with them.

Xuan Le - 35 minutes ago
I wish I knew this earlier.... View
Allan Hill - 2 hours ago
Good one Todd man. Got confidence in you... View
Todd Wills - 3 hours ago
Lisa Sly been doing some prep so hopefully all good xxxx View
News 9

@the_riotact @The_RiotACT
Events are making a comeback to Canberra now that lockdown has eased. And the timing couldn't be better! #Oktoberfest, #Halloween and #MelbourneCup Day are just some of the highlights to stick in your diary this week https://t.co/oXZLz4Gybr (49 minutes ago)