Peter had a little lamb – ewe should read all about it 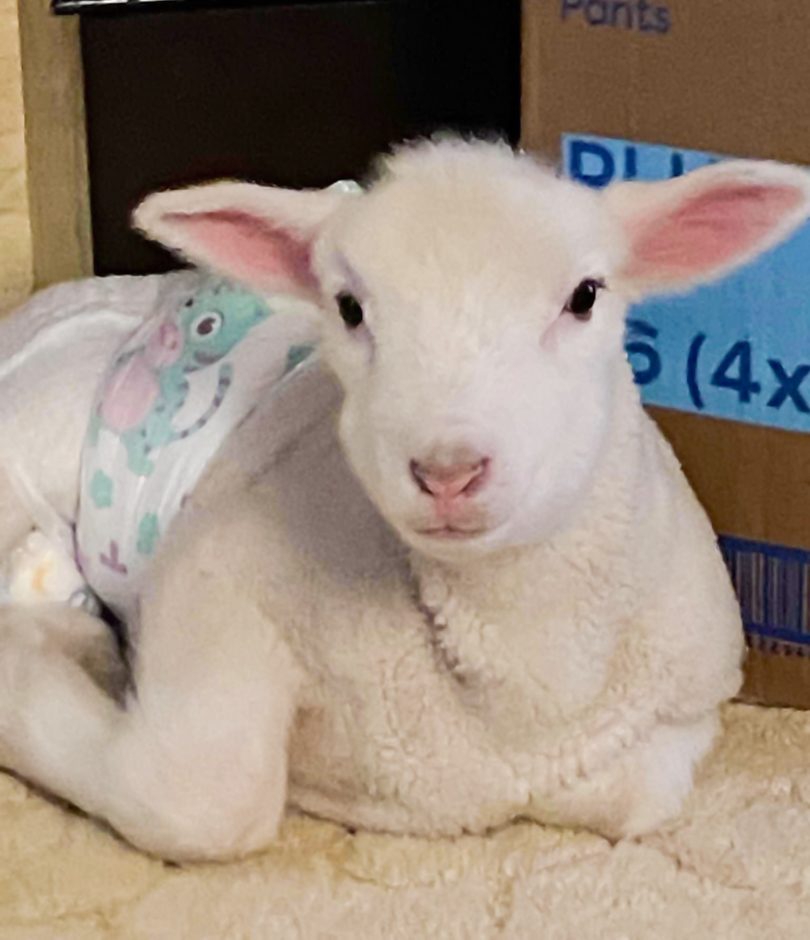 With the cold, early days of his life now behind him, Lambcelot is now the picture of good health. Photos: Peter Graham.

It looked to be only slightly bigger than a large ball of wool. A half-frozen lump left in the paddock by its mother after she gave birth to triplets. Peter Graham of Yass, who was in the process of moving down to his new property at Stockdale, Victoria, saw the ewe give birth.

Sheep, perhaps in retaliation for the fact the majority of them end up roasted, chopped or completely stewed, almost always give birth on the coldest nights/mornings in the paddock furthest away from warm human beds.

Later, Peter noticed mum and two of the lambs had gone, leaving only the runt flailing about in the paddock. As he walked closer, the lamb got up, so Peter presumed he was OK.

The next morning, he noticed that it wasn’t. When Peter saw mum and the two other babies heading off across the paddock without their brother, he knew it was in trouble.

“It was about half the size of the others,” Peter said. “He was also quite sluggish from being there overnight – it would have been about zero because there was frost on the ground.

“I wrapped him up in a blanket and took him inside the house. He didn’t struggle when I picked him, so I just tucked him under my arm.

“I honestly thought he had very little chance of surviving the first night, but I set the alarm and got up every couple of hours to feed him.”

The next thing he knew, Peter was wishing he had shares in the milk replacement industry, buying gallons of the stuff for the newly christened Lambcelot. The barely days’ old lamb was skulling it back as if last drinks had been called. 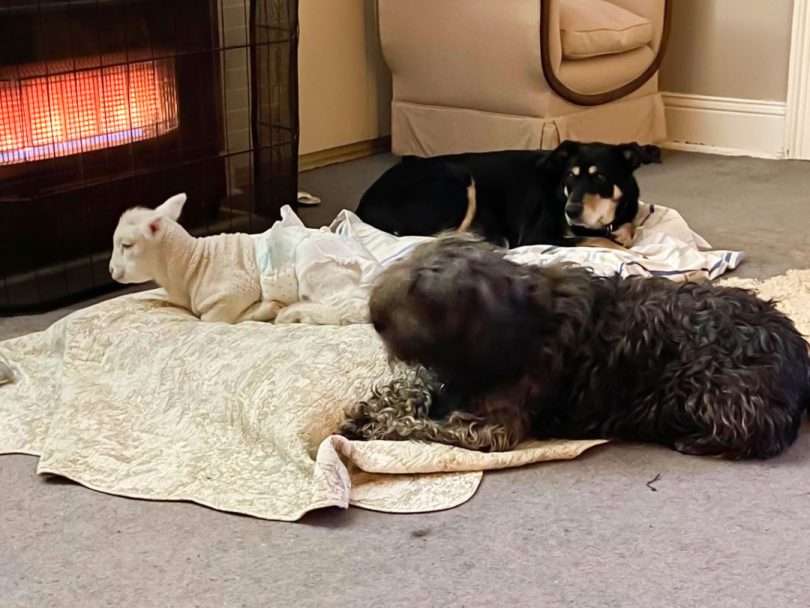 Lambcelot shares the heater with his new best friend, Bob, right and the more laid-back Bess.

Thus began the life of Lambcelot – the really good life.

He has recently graduated from nappy nappies – the one designed for human babies – into, don’t tell anyone, adult diapers. Peter had to do something to save the floor and carpets.

Lambcelot can now take a running jump up onto Peter’s bed, which Lambcelot now shares with his best mate, young Bob the dog.

Bess, the other dog, which is about 100 times older than Lambcelot (in dog years), generally gives them both THE look and goes back to sleep. 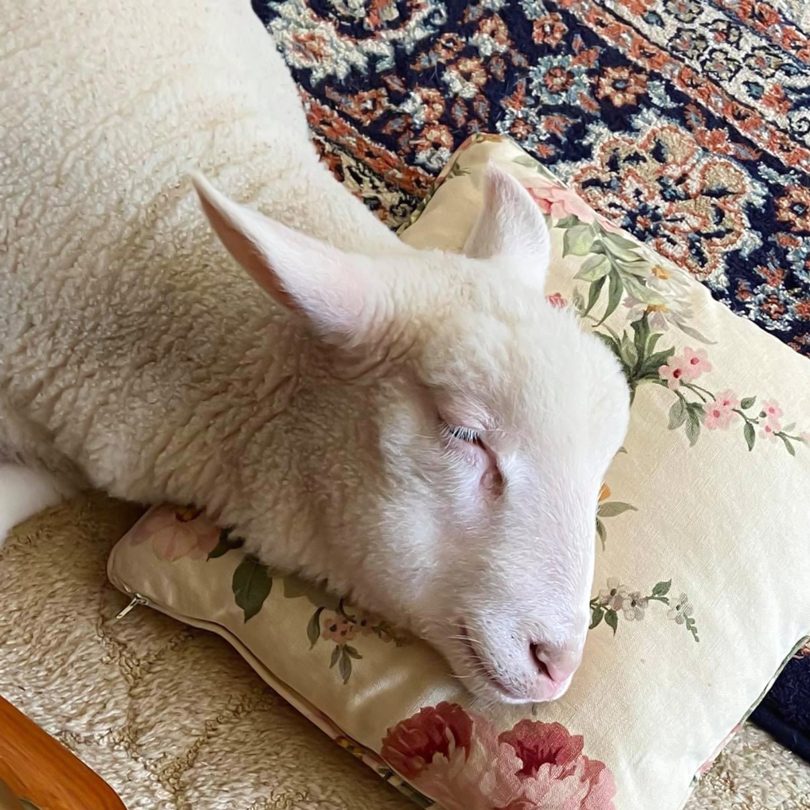 With a surprising shortage of soft pillows outside in the paddock, Lambcelot tries to make himself comfortable inside the Yass house.

He calls out when he wants to be fed (Lambcelot, not Peter or Bob) and loves driving around in the car for no apparent reason. He’s made the seven-hour trip from Yass to Stockdale several times now, preferring the back seat where he can stretch out – definitely wearing two nappies for the occasion. It turns out, human nappies don’t take into account the specific needs of lambs’ dangly bits.

He also likes butting human legs, following anyone with a bucket – regardless of whether it has anything in it – and executing a near-Olympic perfect gambol. 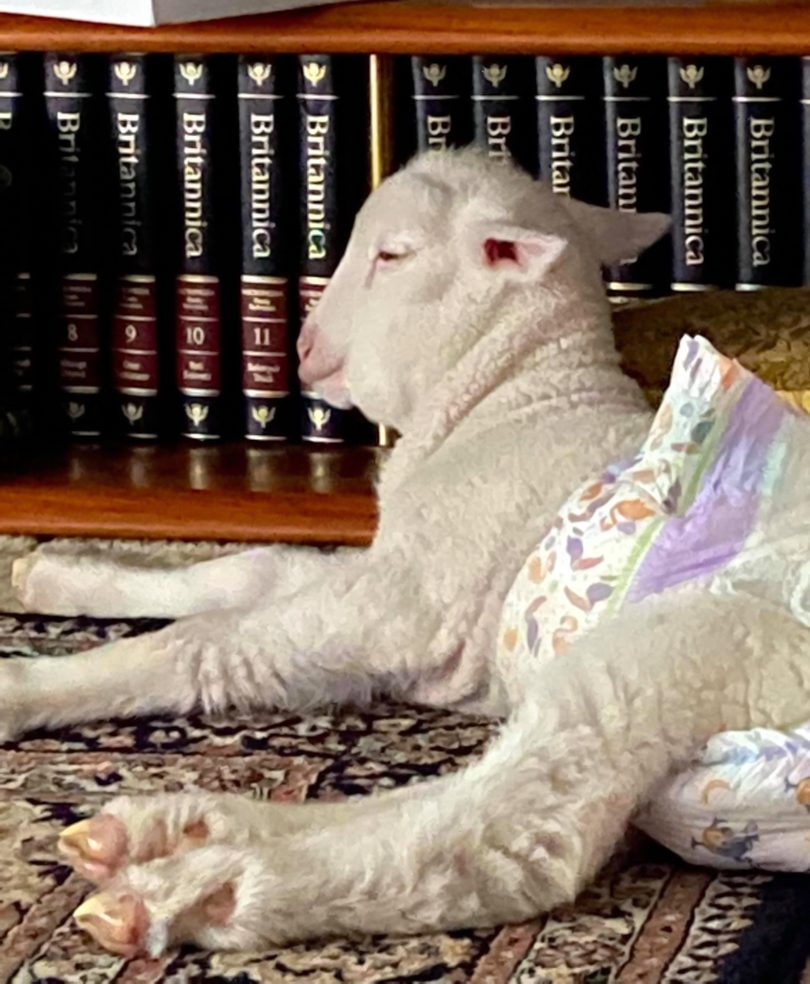 Living inside the house turned out to be quite an education for young Lambcelot.

He is also clearly a cultured sheep. One of his favourite reclining positions is next to the complete hardcover version of Encyclopaedia Britannica. Or under the grand piano, depending on his mood.

The rest of the family, fellow older poddies, Lamborgini, Angela Lambsbury and Lambington, are slowly knitting a relationship with the young bloke as are chooks Susan, Sarah and Kirsten along with Bob the dog and, sometimes, Bess. Everyone was rescued, rehabilitated, rehomed – or in some way brought back to life by Peter and his partner Geoff Lewis.

Although Lambcelot is now well beyond the danger period – in terms of surviving his icy childhood – the prospect of not fitting under the piano is a very real possibility if his feeds continue with anything else but grass.

“He’s about four times heavier than he was, so maybe now it’s time for him to stay outside for longer periods – which, hopefully, will get him off the bed at night. ”

Stay tuned for Chapter 2 – Convincing Lambcelot he is a sheep.

Ris McEldo little Willy was such a star in the classroom but he grew too fast! 🥰 🐑

Leanne Heffernan that’s how I did my lambs. Although regretfully it took me a few days before I realised this was better than one 😂

Love their animals' names - Angela Lamsbury cracked me up 😂

These are our orphaned twins…

Wally Cupitt told you they can come inside!

Peter Dagg I was sure this would be about you! 😁🐑

David Rose - 7 hours ago
We should get the band back together, cobber. But let me get some thermal underwear first... View
Dale Brittain - 7 hours ago
As the ex-Marketing Manager for the GMC400/Canberra 400, all I can say is that it will need lobbying to Canberra’s ultra-co... View
Rory McQuinn - 7 hours ago
Darin Mulcaster Darin, it would be a very quiet race.... View
News 29

Gary J Potts - 7 hours ago
Margaret Lay It was Gowrie Private Hotel, and was one of places for newly arrived APS staff. View
Gabriel Spacca - 8 hours ago
Steve Herczeg 6 months. But that’s because a) I was a glutton for punishment, and b) I’m antisocial and didn’t want to... View
Ashlee Betteridge - 9 hours ago
Oh so they are turning it into a quarantine facility? Which could then be reconverted back to privately operated student acco... View
News 9

chewy14 - 8 hours ago
Kenbehrens, Barr's statements and documented roadmap are fundamentally at odds with the National Plan. The Vaccination target... View
whatwik - 10 hours ago
And you are not the only one - the Riotact's poll is currently giving him 70% support. View
Oscar Mike - 10 hours ago
I just don’t trust Pfizer this is due to their decades long history of fraud and corruption and the fines to show it. View
News 18

Bethany Roberts - 8 hours ago
Selina Frances 😁 this is why you don’t plant tomatoes until after Melbourne Cup View
Sarah Young - 9 hours ago
It’s bloody awful, no picnics I this weather!! View
Community 10

TimboinOz - 10 hours ago
I don't need a cookbook to roast meat. You need a VERY HOT oven or 60CM Weber Charcoal BBQ and a meat thermometer, And then c... View
Opinion 57

HiddenDragon - 10 hours ago
Yes, this is inconvenient news for an ALP which has painted itself into a fiscal corner by selling out on negative gearing, c... View
show more show less
*Results are based on activity within last 7 days

@The_RiotACT @The_RiotACT
Was the ACT Government right to extend the lockdown? Is this the only way to keep Canberra safe, or is the community and business impact on us all just too hard? Have your say in this week's poll https://t.co/3TGwjQ2HEx (8 hours ago)

@The_RiotACT @The_RiotACT
There are plenty of glossy cookbooks full of gourmet feasts and gorgeous photos. But what are the tattered, stained and totally dependable, trustworthy #books on your #kitchen shelf? https://t.co/Fax9I0zG8P (9 hours ago)

@The_RiotACT @The_RiotACT
This beautiful four-bedroom family home is positioned in a prized and idyllic location directly opposite a park where you can watch the kangaroos graze and the kids play. And now, it's in full and spectacular bloom https://t.co/6bLJnoEiT1 (10 hours ago)