Philo’s West Side Story Playing at the Erindale Theatre 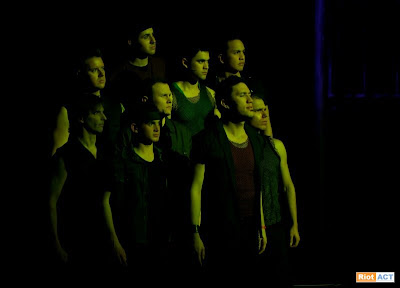 The brain dead oxygen thieves who constantly bemoan the decline of manners and the failings of today’s youth should take note of the following years from our current contemporary culture.

The first is 1597, when Romeo and Juliet was first published. Fatal gang warfare punctuated by a double suicide.

Inspired by that work was the 1957 musical (them was the golden years right? You old whining bastards) West Side Story.

The Canberra Philharmonic Society, aka Philo has assembled a monumentally good cast to retell this amazing tale for the next two weeks.

Before I go on here’s what the composer Leonard Bernstein had to say about the production to Rolling Stone:

“Everyone told us that [West Side Story] was an impossible project…. And we were told no one was going to be able to sing augmented fourths, as with “Ma-ri-a”…. Also, they said the score was too rangy for pop music…. Besides, who wanted to see a show in which the first-act curtain comes down on two dead bodies lying on the stage?… And then we had the really tough problem of casting it, because the characters had to be able not only to sing but dance and act and be taken for teenagers. Ultimately, some of the cast were teenagers, some were 21, some were 30 but looked 16. Some were wonderful singers but couldn’t dance very well, or vice versa… and if they could do both, they couldn’t act.”

That was New York at the height of Broadway. Somehow today Philo here in Canberra is blessed with a cast that can belt out the score, dance, and act their socks off.

Before we go further allow me to doff my lid to Robyn Collins and Tim dal Cortivo, the leads of Maria and Tony. They have sensational voices and between them totally evoke to the audience the feeling of new love.

Far better to keep what you have and experience the wonder of new love vicariously through actors at the theatre.

If you get excitement, and catchy songs along the way? So much the better!

As I left the theatre, after seeing and photographing the final dress rehearsal, I was humming, and then even singing to myself “Tonight… Tonight…” So yes, they convinced me.

More importantly, for long time lovers of the work, the classic and hilarious song “Officer Krupke” (a great depiction of society’s willingness to cave into hoodlums and betray the police) was delivered with an exuberance that is not equalled by the broadway recordings of my own youth.

If you know any troubled kids take them along to see the tragedy of their path. If you already know and love West Side Story get yourself along to see it.

It’s all local (and very young) talent singing, dancing, and acting an epic story to the height of the art. What more could you want?

Went last night and it was fantastic. I agree johnboy the ‘Officer Krupke’ seen is a classic. Great production…well done Philo!

I didn’t realise that was you taking photos last night Johnboy otherwise I’d have wandered over and said hello! Nice images.

Nick Swain - 28 minutes ago
Another 'discovery' is that Canberra is not a new area but has many layers of history from the original First People inhabita... View
Property 2

realist - 31 minutes ago
Isn't it funny that Ben Ponton has taken so long to speak up. Can the government impliment changes before the Developers comp... View
News 4

Capital Retro - 43 minutes ago
It's a big ask to give personal movement information to any government, especially a Labor one. View
keek - 2 hours ago
That's a pretty weak attempt to justify a 1984esque requirement to check in every place you go. I certainly won't be particip... View
News 2

Acton - 2 hours ago
I agree with our need for easy access to voluntary euthanasia as decided by the individual and not vetoed by anti-choice reli... View
Property 19

chewy14 - 3 hours ago
JS9, I disagree because preferences and wants are not met with housing almost always. I'd prefer to live in a mansion but I c... View
JS9 - 4 hours ago
I don't think its a reasonable assumption to think that a perfectly competitive market exists Chewy in the Canberra housing m... View
chewy14 - 7 hours ago
I really don't get how you say it's only about profit as if it's a bad thing. These units only get sold and profit made if th... View
News 27

Andrea Kerr - 6 hours ago
Kim KD Winks the developer has paid $400,000 in settlement to the government after many months of negotiations that’s a lit... View
Motoring 3

mf64 - 6 hours ago
Plus Canberra has the worst most self entitled drivers around. Having driven all over the country and around the world by far... View
Property 8

JS9 - 14 hours ago
They haven't been installed yet I don't think Graham given it was only just funded in the Budget released a couple of weeks a... View
Graham Byrne - 15 hours ago
I was wondering what all those cameras were about. They are everywhere. But I’d rather see more red light cameras. View
News 7

Mike of Canberra - 16 hours ago
Over many years, the only consistency I've seen from the green-left is their apparent dislike of ordinary working people actu... View
News 6

steve2020 - 17 hours ago
The disrespect towards women had been encountered in many workplaces that I had worked in, in Canberra. The irony is that bec... View
Business 1

Nick Swain - 18 hours ago
Even in the hardest lock down time Green Square was the place to hang out - there was a strong sense of community. Many of us... View
show more show less
*Results are based on activity within last 7 days

Who is Jessica Pearce? Exploring the grief and mystery of ‘missingness’

@The_RiotACT @The_RiotACT
Helicopter rides, a reptile kingdom, rides, packed pavilions and even pig races will be among the activities to enjoy at the Goulburn Show this weekend https://t.co/OqAqV0Htd4 (14 minutes ago)

@The_RiotACT @The_RiotACT
Speedway in Canberra has had many stalled starts, but organisers hope they can overcome the sound barrier to become a permanent sporting fixture https://t.co/9WLdPjwomd (1 hour ago)

@The_RiotACT @The_RiotACT
In our new series celebrating the stalwarts of the Canberra hospitality industry, we drop in to Madam Lu for a taste of Malaysia and meet Ming Kong – a familiar face to many food lovers https://t.co/LFFMT38uGa (2 hours ago)