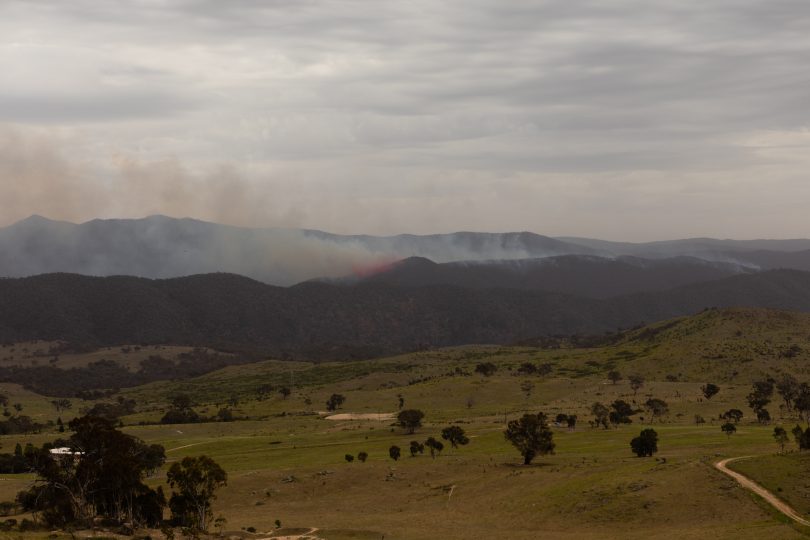 The fire is burning erratically about 8km from the nearest suburb. Photo: Danielle Jukic.

ACT Emergency Service Agency Commissioner said the conditions of the out of control bushfire at Pierce’s Creek are similar to the devastating fires 15 years ago and are warning Canberrans to not be complacent.

Commissioner Dominic Lane said due to the extremely dry weather, firefighters are seeing similar conditions to what they saw in 2003, which saw nearly 500 homes destroyed and four people’s lives lost.

Around half a dozen farms around Paddy’s River area are under threat, along with Tidbinbilla Tracking Station just to the east of the fire. Commissioner Lane said though the fire was eight kilometres away from the nearest suburb, he was concerned of the possibility of the fire spotting over the mountains and into the suburbs of Canberra.

ESA are doorknocking 400 to 700 homes, to educate people about what the fire threat alert levels mean, their current bushfire plan and what materials are available to them via www.esa.act.gov.au. Mr Lane is encouraging Canberrans to undertake the four simple steps that are outlined in our bushfire survival plan and to stay alert.

“My view is there is a sense of complacency in Canberra. A lot of people have moved on since the 2003 bushfires and the city has grown a lot,” he said.

“The stronger message we have to people in our urban area, that if this fire does break out and race towards suburbs, we could see an impact on the cities edge. Whilst that is not immediate, if we do not prepare now, we will not be ready.”

Mr Lane said firefighters are not in a position to directly attack the fire because the fire behaviour is too erratic.

“We saw overnight at 2 am in the morning, flames that were treetop height and while firefighters tried bravely to get in and contain the fire, it was just too dangerous,” he said. “Those conditions still exist out there at the moment, and our main strategy is around property protection and preparing our community.” 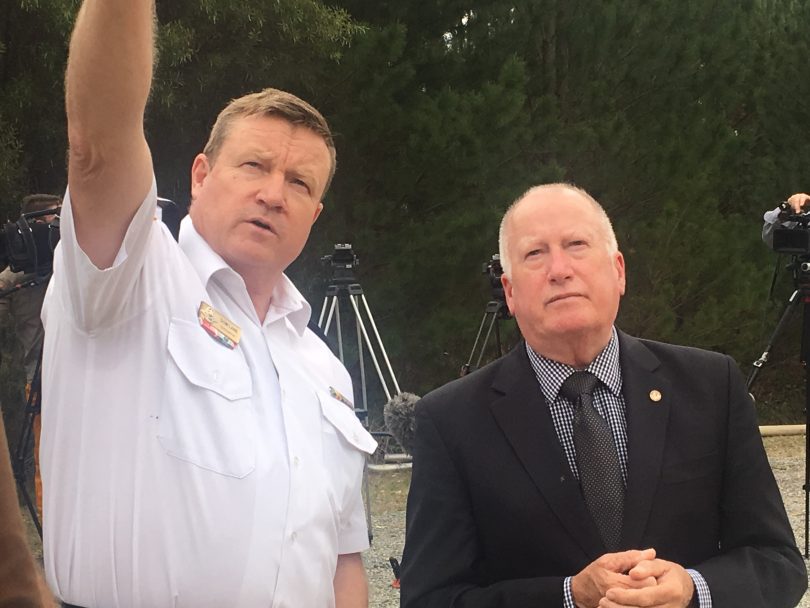 Mr Lane said the outlook to the weekend was not good, with dry conditions forecasted for the coming days.

“Whilst we will see milder weather on Saturday, we will be back into high and possible severe fire danger on Sunday and Monday. This is not over by any means,” he said. “In my mind, this is not even the beginning of summer and we have a long hot summer against us.”

All public inquiries regarding bushfires and emergency management should be referred to the ACT ESA on 6207 8444 or at www.esa.act.gov.au or to Access Canberra on 13 22 81 or at www.accesscanberra.act.gov.au.

If you have any images of the Pierce’s Creek bushfire that were taken from a safe location, please share them with us in the comments section below or on our Facebook or Twitter pages.

Geoff Withers - 6 minutes ago
Registration charges in the ACT should cover parking costs, its ridiculously high. View
Michael Roy - 12 minutes ago
They really aren't, I would suggest reading "the high cost of free parking" by Donald Shoup. You can also read about demand b... View
Alan Vogt - 19 minutes ago
Graham Smith a challenge I agree. Having run large sporting events for a period of my working career I have some experience w... View
Community 13

Redgum - 24 minutes ago
Better Renting is correct on one point only. The decision to invest in a rental property is a business decision. Investments... View
News 10

kenbehrens - 44 minutes ago
Government charges contribute towards the high cost of rent in Canberra. It's Government policy to increase Rates, to a level... View
Geoffrey Bell - 3 hours ago
Mandy Truman $206 cheapest share place i could find. https://www.allhomes.com.au/share/search?region=canberra-act&district=gr... View
Mandy Truman - 3 hours ago
I'm full time uni and I got made redundant from my job and then got a casual job but haven't had work for 10 weeks. I would h... View
News 246

Claire O'Brien - 52 minutes ago
My sister broke her back on this same flying fox in the late 80s/early 90s. The drop is too high in areas. My daughter did na... View
Lifestyle 3

@the_riotact @The_RiotACT
Canberra #food blogger Alec Morris is encouraging more families to cook together with his colourful #pasta creations. And he finds #inspiration in some unlikely places! https://t.co/PDvKuqqLhz (15 minutes ago)