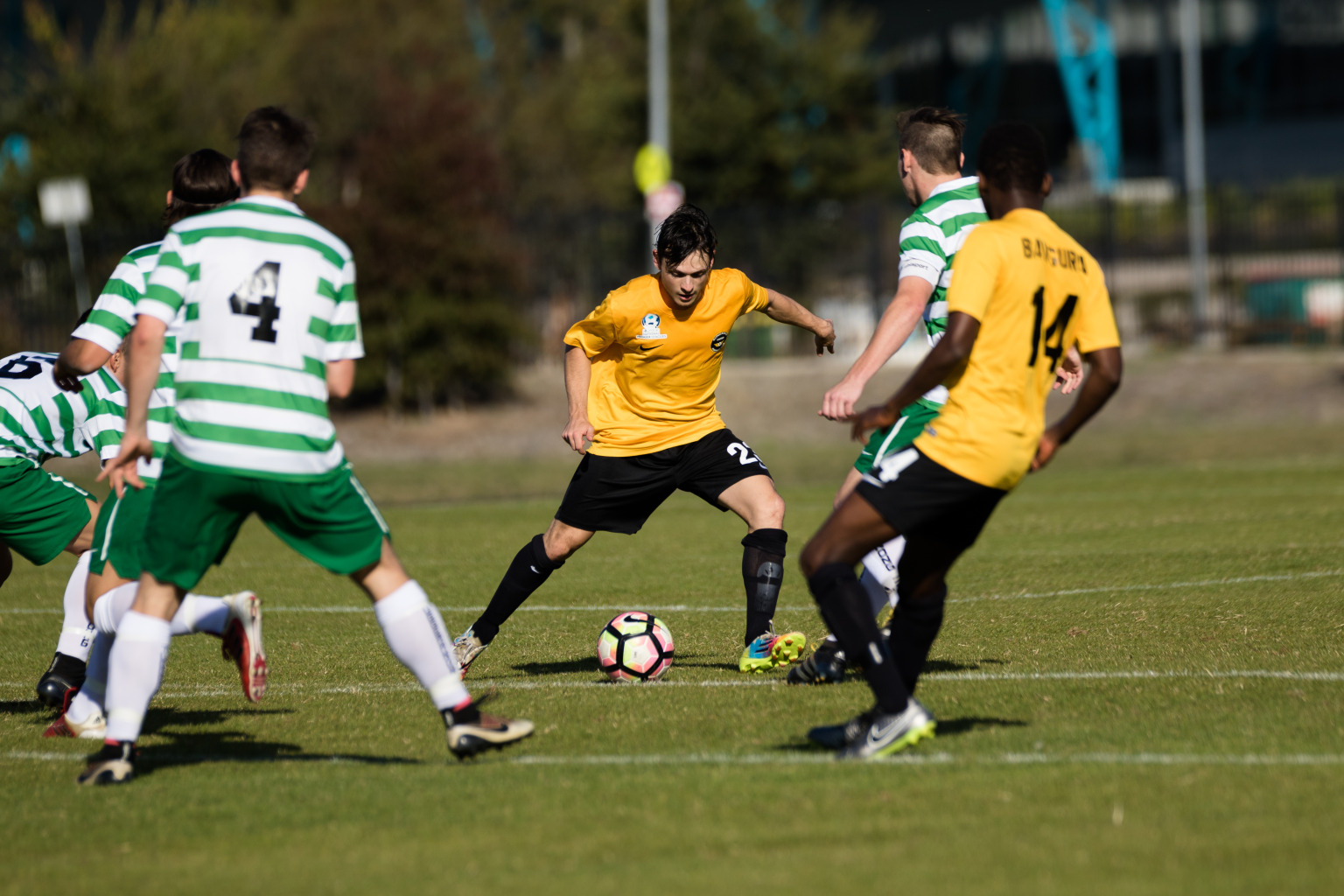 A blistering five-goal first half paved the way for the FFA Centre of Excellence to record a dominant victory over the winless Monaro Panthers at the AIS on Saturday. A brace to Charlie Mavros was complemented by singles to Mira Murtaovic, Bryce Bafford and Kai Trewin in the 45-minute blitz.

Woden-Weston FC clawed back a two-goal deficit on Saturday as Olaide Yinka-Kehinde’s second-half brace rescued a point for the home side. The Riverina Rhinos jumped out to an early lead through Jacob Donadel before Ally MaLeod doubled the lead with thirty minutes to go. But Yinka-Kehinde struck ten minutes later before completing the comeback late in stoppage time to give both sides their first point of the season.

Canberra FC kept their perfect start to the season alive as they downed Belconnen United at McKellar Park despite an early red card. Ian Graham was dismisses after 22 minutes but the visitors were not deterred, grabbing two quick goals on the stroke of half-time through Domenic Giampaolo and Niko Kresic to go into the break up 2-0.

The Blue Devils tried to get back into the game in the second half as Taylor Beaton scored with half an hour to go, but two sublime strikes from Thomas James meant that Jason Ugrinic’s stoppage time finish was merely a consolation for the home side.

Gungahlin United grabbed their second win in a row for the season as they kept Tuggeranong United winless at Gungahlin Enclosed Oval. An own goal off Cameron Doherty after a dangerous cross in the 38th minute was enough to separate the two sides at the break, and throughout the second half too.

Tuggeranong pushed hard for an equaliser but Gungahlin’s Jason Denham was up to the task in goals as he made a number of key saves.

Reigning Premiers Canberra Olympic returned to the winners list with a dominant victory over Tigers in Cooma. An own goal and a rocket from Daniel Colbertaldo separated the sides at half time before Olympic took over in the second period.

Braces to Jeremy Habtemarian and former Tiger Stephen Domenici were complemented by Jordan Tsekenis’ late strike as Nikolas Abot rescued a consolation goal for the well-beaten home side.

Fixtures for the next round are available here.

It would be nice if Capital Football could find the resources to have referees attend some lower grade matches.

Registered players pay substantial fees to participate in the Mens State League and the organisers have an obligation to provide refereeing.

Alternatively, they should refund a portion of the fees that would be allocated to the referees that are not being supplied.

steve2020 - 14 minutes ago
I agree with the notion that black and white is an American import. It's narrow minded and has become divisive with identity... View
Peter Higgins - 31 minutes ago
Of all the things to import from the States, this MUST NOT be one them. Peddle your race-baiting communism somewhere else and... View
MERC600 - 3 hours ago
“It’s so great to see other culturally diverse people here,” I remarked. “I’m used to being the only non-white pers... View
News 3

yellowredme - 16 minutes ago
What makes this company think Canberra wants drones? They have ads on Facebook for gelato and banana bread delivery, along wi... View
Andrea Wild - 3 hours ago
Ian Bushnell, it's interesting that you call Wing's approach "softly-softly". I'd call it sneaky-sneaky. Why wouldn't they te... View
Property 8

Elroy Jones - 39 minutes ago
Kate Tricks it is exactly what we need. Why do you think houses are so bloody expensive here?? Because there aren’t enough! View
JC - 1 hour ago
Attractiveness is in the eye of the beholder. I often wonder how an ugly mug like me found a good gorgeous wife, turns out th... View
54-11 - 4 hours ago
I've been to 2nd and 3rd world countries where people are living cheek by jowl, and they can design some very attractive buil... View
Property 4

JS9 - 58 minutes ago
Not saying it isn't true Nick, but is there any reasonable, valid research that has been done around housing preferences any... View
bj_ACT - 2 hours ago
How about Canberra developers start building apartments that are big enough and of a high enough quality to encourage mature... View
Nick Swain - 2 hours ago
Chris Miller might just be a tad biased towards apartments. Where is the fact that most people would prefer to live in a sepa... View
Opinion 22

It's no secret that I'm a huge fan of this city. Canberra has been my home for the better part...
Motoring 34

The Canberra Liberals may have ridiculed the idea, but the ACT Government's staggered-hours proposal to ease peak traffic congestion as...
Opinion 29