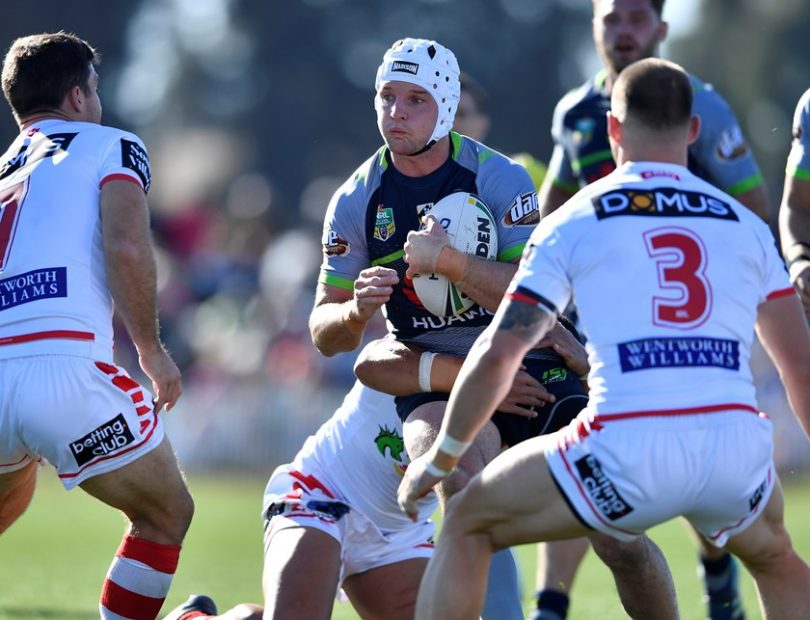 The Raiders slumped to another tight defeat in a 25-18 loss to the Dragons. Photos: Supplied by Canberra Raiders.

Well, well, well. Here we are again. Another weekend with a broken heart due to the Raiders’ inability to win a close match.

The Raiders slumped to YET another tight defeat in a 25-18 loss to the Dragons in Mudgee on Sunday afternoon (20 May).

In the post-match press conference, coach Ricky Stuart admitted he is starting to sound “like a broken record.”

Another close game slipped through their fingers.

Another botched effort of playing “smart” football at the death.

In case you need reminding, it was 18-all with 10 minutes to play and the Raiders’ winger, Jordan Rapana, was in the bin. The Raiders were in Dragon’s territory and were right in front of the sticks.

Instead of going for a field goal and going a point up and milking the clock till they had their man back on the field, the Raiders went for the line and came up short.

Soon after, Dufty broke the line and went on a solo run to give the Red V the lead, which they didn’t relinquish.

It left Green Machine fans and Stuart pulling out their hair.

“We won’t improve as a football team until we start consistently learning how to close out those games that are tight. We don’t consistently do it well enough,” Stuart said.

“I’m not pointing the blame at anyone, but it’s in everybody’s control to understand how we’ve got to play and when we’re trying to close out games.

“We put ourselves in so many positions to win games this season so far and we haven’t. That is frustrating like it was last week. I sound like a broken record every week, we work on it, we talk about it, we’re not doing it.

“It’s not my job to run out of patience, I’ve got to keep working hard at it myself to fix it.” 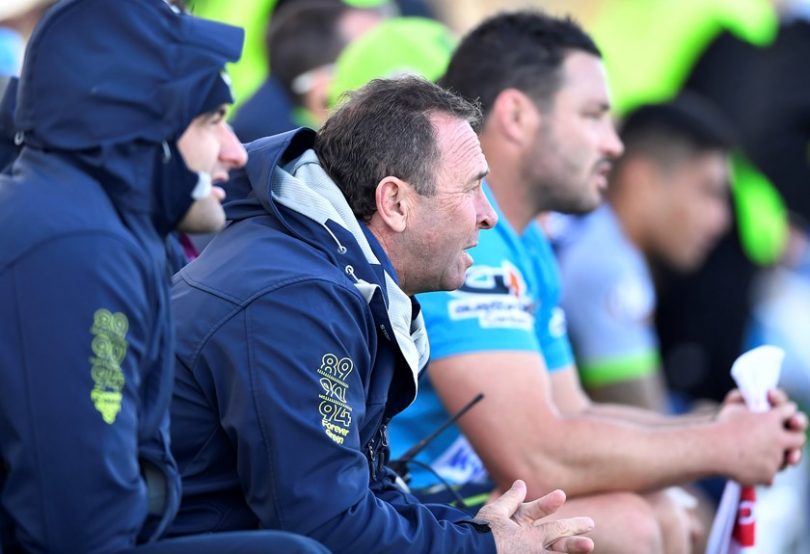 It will be only fair for Raiders fans to lose patience with their team since they have consistently struggled to win close games since Ricky Stuart left the Eels and came to Canberra in 2014.

The consistency of the Raiders’ close losses has turned the issue into an epidemic for their 2018 season. Over the past four years, the Raiders have become the worst team at getting over the line, worse than the teams rooted to the bottom of the ladder.

By my count, in Stuart’s four years in the nation’s capital, he has lost 26 matches by a converted try or less. On the flip side, his side has only managed to win nine matches by the same margin since 2014.

It’s difficult, nigh impossible, to find evidence for a reason for the Raiders’ tight losses.

Is the side mentally weak?

Is there not enough leadership on the field?

Sticky believes it’s just a matter of learning how to close out games that are tight and the coach also says he will continue to work hard and figure out how to fix the problem.

But hasn’t the Green Machine been infected with the disease since 2014? Surely, four years is enough time to find a cure?

Until we understand the disease and the reason why it has taken such a strong hold on the Raiders, it will be impossible to find a cure to make the Raiders a top-eight side.

Fail to find a cure and the crowds will quickly dwindle away.

Do you know the cure for the Raiders’ close losses epidemic?

One Response to Please Ricky, what’s the cure for the Canberra Raiders close losses epidemic?
Filter
Showing only Website comments

Ricky says “We won’t improve as a football team until we start consistently learning how to close out those games that are tight. We don’t consistently do it well enough,”
Well first of all perhaps the consistent nature of their learning is the problem. Maybe they need new ways of learning. What’s even more of a worry is that Ricky is saying “until we start…” implying that they haven’t even started to learn. You would think this is problem number one to deal with at training because it has been going on a long time. BTW consistency isn’t actually their problem. In fact I’d say they are very consistent. They consistently drop off in the fourth quarter of every game and they consistently lose the close games. Joey Leilua consistently has brain explosions.
How to fix the problem? New coaching staff can work wonders.

@The_RiotACT @The_RiotACT
Misplaced for decades, the drawings and meticulous records of Goulburn #architect EC Manfred eventually saw the light thanks to the dedicated efforts of #volunteer historians, plus a little bit of luck https://t.co/Ga0Bn2B66D (34 minutes ago)