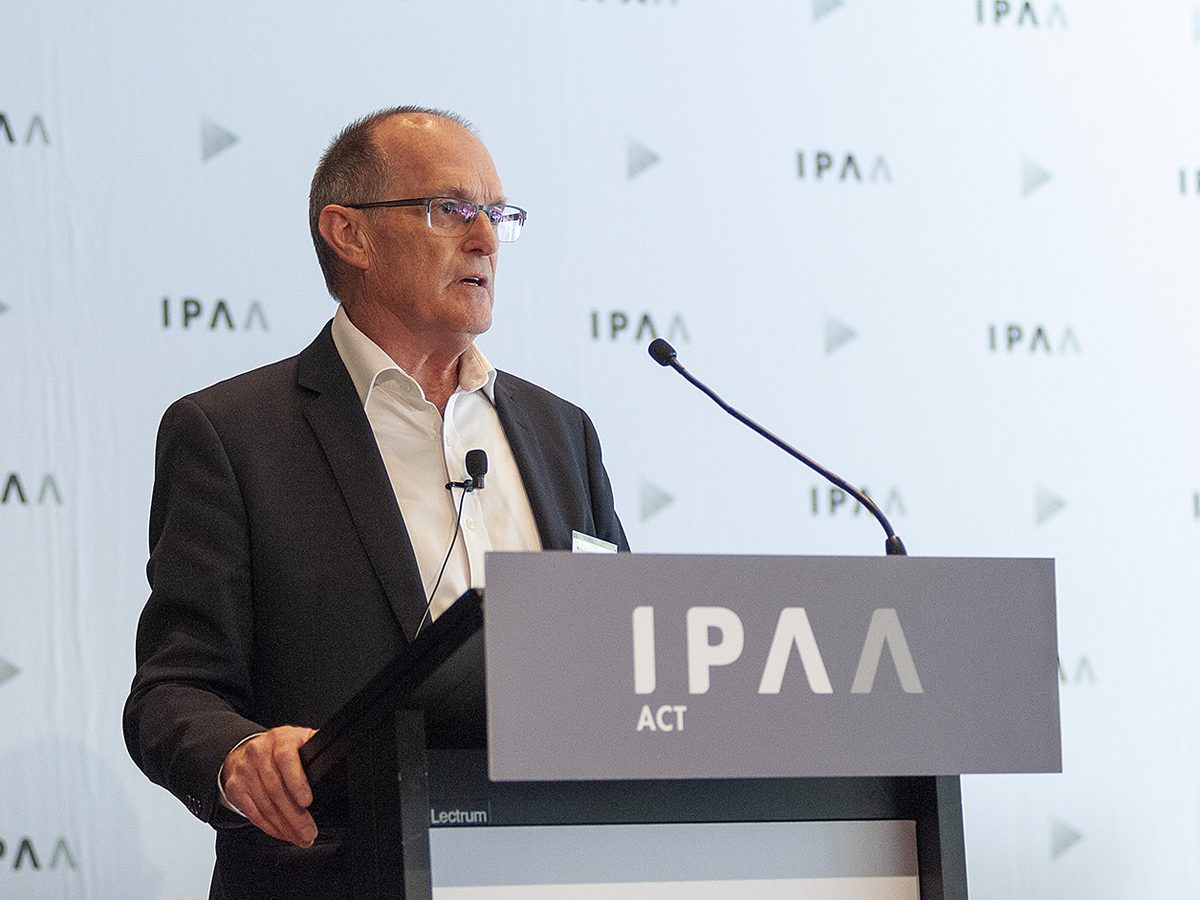 Change has been swift at the top of the APS, with Department of Prime Minister and Cabinet Secretary Phil Gaetjens out and Stephanie Foster named as acting head until the new Albanese Labor Government makes a permanent appointment.

Mr Gaetjens, a former chief of staff to the previous Prime Minister Scott Morrison, was not expected to stay on and, in effect, had a target on his back in the event of a Labor win.

Mr Albanese revealed the change in his first press conference as Prime Minister today before travelling to Tokyo for the Quad security meeting.

“Stephanie Foster is the acting head of the Department of Prime Minister and Cabinet, as of yesterday,” he said.

“I will be making an announcement at an appropriate time after we go through the formal procedures, which are in place, for the appointment of a secretary of the Department of Prime Minister and Cabinet.”

Mr Albanese made a point of noting the professionalism of the public service during the election process, saying his government would not be sacking public servants, although that may not extend to department heads.

Machinery of government (MOG) changes will wait until caucus meets on Tuesday week (31 May) and the full ministry is named. The ministry will be sworn in the next day.

“We will have a meeting of the ministry next Wednesday, along with meetings of the appropriate cabinet committees, including the NSC [National Security Committee] and the ERC [Expenditure Review Committee],” Mr Albanese said.

“I met with the Department of Prime Minister and Cabinet yesterday, and I thank them for their professionalism.

“We’ll be valuing public servants and respecting them. And the fact that we’re able to have discussions and put measures in place to allow, whatever the outcome of the result on Saturday, for those arrangements to be put in place says a lot about how professional our public service is. We should not take it for granted.”

ANU Professor John Wanna, who specialises in public administration, expected Mr Albanese to retain most of the current agency heads but urged him to simplify portfolios and untangle unrelated responsibilities so there were clear reporting lines.

Professor Wanna said some departments contained too many areas and answered to too many ministers.

He agreed with former Public Service Commissioner Andrew Podger who argued that there ought to be a stronger alignment between the core set of functions and clear identification in the portfolio and “not have this amalgam where people didn’t know who they were responsible to”.

“There were some departments that were responsible to about five ministers and that’s getting ridiculous,” Professor Wanna said.

“So some clear alignment of simple, departmental names with a clear mandate of what they’re meant to be doing and lining it up with a minister who has portfolio responsibility, yes they might have a junior minister underneath them, but there’s a single point of reporting to that minister. That would clarify a lot.”

In other cases, ministerial titles and departments were thrown together to fix a political problem, Professor Wanna said.

He said if the government simplified arrangements, the Opposition would probably follow suit.

Professor Wanna expected most of Mr Albanese’s shadow ministry to stay in their jobs but there would be changes, some brought on by the election results, such as the loss of Home Affairs spokesperson Kristina Keneally.

He warned that Labor needed to be careful managing the MOG changes because they were hugely expensive and could destabilise a government for months.

For example, at one point, climate change was spread across four departments, staff didn’t have the same IT system and they couldn’t communicate with each other in some instances.

“MOG changes can seem easy for the politicians, but digesting them as a service can take months,” Professor Wanna said.

READ ALSO Drawing with light: Roger Beale on painting, activism and the art of concentration

MOG changes can include the creation or abolition of an entity or portfolio and the reallocation and transfer of functions and responsibilities among agencies after a change to the Administrative Arrangements Order (AAO) or decision of the Prime Minister or Cabinet.

The Prime Minister may specify a completion date for a MOG change, but otherwise, entities are expected to complete MOG changes within 13 weeks.

PM&C, the Department of Finance, the Australian Public Service Commission (APSC), the National Archives of Australia, Attorney-General’s and the Digital Transformation Agency are all involved in managing the changes, including funding appropriations, the movement of staff, adjustments to pay and conditions, records management and solving disputes.

A guide to MOG changes can be found on the Finance website.

Let’s see who gets the plumb ambassador postings.

My bet on PM&C permanent appointment is either a failed Labor minister or a Union Executive. Kristina Keneally comes to mind

You’re probably right. She must have dirt on the ALP, as they always seem to have some sort of job for her

Bring on icac. I’m assuming it will cover this guy.

Good news! Next the reporters! ABC ones in particular!

Wendy Peters Not at all, but not unusual for a head if PM&C to move on.

Kytie Mclign yes it is, I worked in the service for many years and nearly always was the case

Wendy Peters It isn’t at all common. Workersmight get moved with their job to another department, but they don’t leave the APS in hkgh numbers like you are suggesting.

Kytie Mclign didn’t say they left the public service, just moved on, often we were tasked with finding them other jobs

No surprise there. When you fail to provide frank and fearless advice in a bipartisan manner as a senior public servant and align yourself with one side, you can’t expect to hold office when there’s a change on the Treasury benches. I wonder if Albo will have the courage and integrity to de-politicise the appointment of senior public servants, or will he follow the convention of his predecessors – jobs for mates.

Excellent. Cut the public service in half and then double the size of the Australian defense force.

Malcolm Campbell how do you seriously expect to double the size of the ADF? Conscription?

Greg Oakes I think Malcolm wants soldiers to process payments at DSS, develop billion dollar infrastructure projects and a million jobs in between. Bit of a stretch.

Malcolm Campbell actually they will do that by shredding contractors, which is a good thing IMO. Defence are trying to grow exponentially but recruitment is the issue.. need people budget is already there.

Malcolm Campbell How did you come up with those figures? Picked them out of the air?

Malcolm Campbell yes, we should be like North Korea huh

ReplyHide replies
Malcolm Campbell8:13 am 25 May 22

Alex Rothacker Theres a big difference and you know what I mean.

John Holmes Kevin Rudd wanted to work in a collegiate way with the opposition when he became PM and didn’t change any of the previous Govt’s appointment. It was a mistake, Abbott was a wrecker and wasn’t interested in working together in Australia’s best interests.

John Holmes this particular Public Servant “appeared” to have been acting in a political manner.

John Holmes Why should they keep on a department head who was the chief of staff for Scott Morrison for a time and also worked for Peter Costello? He’s a Lib.

Campbell and Pezzullo should also go. Their egregious behaviour speaks for itself.

If anyone deserves to go, it is he.

Where to start with the ABC if we’re talking about ‘apolitical’ in regards to taxpayer funded.
Complete disbandment and rebuild from 0?

Nathan Burraston back to your Young Liberals meeting

Nathan Burraston did Murdoch tell you that?

Nathan Burraston just getting rid of ita butrose should do

Nathan Burraston You probably never watch or listen to the ABC.

Nathan Burraston One of Albanese’s election commitments was to provide better funding to the ABC and SBS, as well as reverse Morrison’s cut of $83.7 million to the ABC.

Alex Elliott that’s fantastic mate. Budgets are matters of public record.
Pray tell which year of the last 9 the ABC had a reduction of funding?

Nathan I don’t know the exact figures for each year but I think this article seems to cover it quite well. I’m sure with a bit of research you can more detailed information elsewhere:
https://www.theguardian.com/media/2022/feb/04/coalition-has-slashed-526m-from-abc-and-most-australians-want-funding-restored

Good idea. Root out all the Right-wing saboteurs that have been forced onto the ABC for the last decade.

Nathan Burraston
Been a long time since you watched the ABC. A coterie of ex Sky and Murdoch hacks

Onelia Herriot the opposite is my read.

Bring back the apolitical public service. Get the gas and mining industries out of our policy making processes. Don’t lose any more corporate history.

Julie Kidd While we have department heads on contract, it’ll be almost impossible to get politics out of the public service.

Bronwyn Meredith the old frank and fearless. Apolitical, objective, impartial. Only happens when dept heads are permanent and not political apparatchiks.

Bec Booth Couldn’t agree more! Now, they’re too scared to disagree with their Ministers for fear of losing their jobs.

Bronwyn Meredith exactly. And there’s a new generation of APS who don’t know any different. They actually think this is normal 😔

Bec Booth I saw it in action! Dreadful.

Kathy Campbell head of foreign affairs, next? Is she on the plane to Tokyo with Albo and Penny? These political appointees should go and the apolitical public service rebuilt from day 1.

Julie Patricia Smith she was a dep sec last ALP government too remember.

Gaetjens was never a public servant. He was a political hack given the role to protect his political master, never to serve the public. He was always politicised, even before ScoMo appointed him. Might as well as appointed Bernadi!

Departmental heads have become such political animals and appointments, it should be convention for them to offer their resignations to their incoming Minister, even after a suitable briefing period. Nine years of implementing LNP policy without resigning, probably means they likely agree with it, and may have designed it.

Paul Irving from what I’ve seen, they’ll do what they’re told and don’t question it or it’s their job gone.

Andrew. Pretty much, the reason I left the NZ public service. The National Party (Kiwis version of the Liberals) politicians, and more especially their veryv ambitious and narcissitic political advisers, were so sure of their own ideas and analysis, that they weren’t interested in frank, fearless and forthright from officials, only sycophantic and soothing sureties, and photo opportunities.

The ANZOG has a lot to be proud of, but they have facilitated and abetted this change with frankly, weak and meaningless “leadership” crap for years.