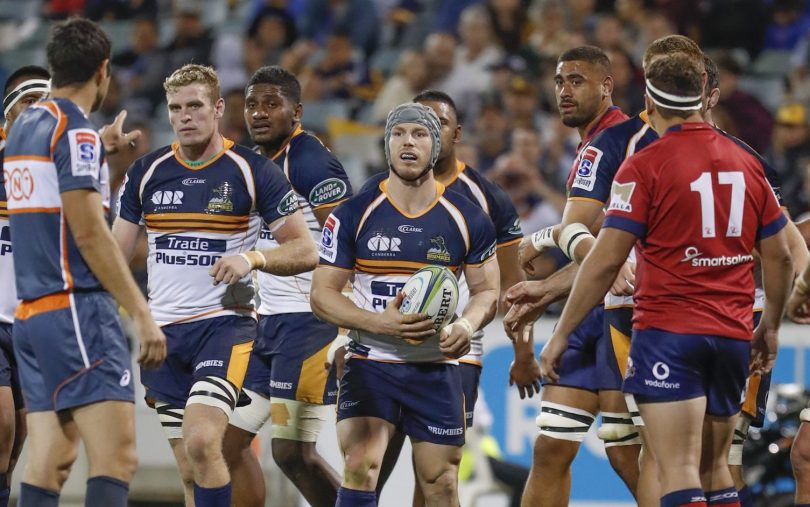 David Pocock’s Super Rugby career is over effective immediately after medical consultation showed that his lingering calf injury was not improving, forcing the renowned flanker to call time on his Australian domestic career.

Pocock officially announced his Brumbies and Australian domestic rugby retirement on Tuesday afternoon (28 May) after it was decided to rule him out for the rest of the Super Rugby season.

Though he remains hopeful of pulling on the Wallabies jersey for the World Cup in September, Brumbies Rugby legend David Pocock will hang up his Super Rugby boots due to a series of injuries taking its toll on his body. Tim Gavel sat down for a chat with the star flanker to reminisce on his career with the Brumbies and his future plans off the field.

His current injury-plagued 2019 season will be his last with the Brumbies with the flanker confirming he will not be signing a contract extension with the team at the end of the season.

Pocock has made just three appearances for the Brumbies this year due to injuries and although he will not play again for the Brumbies, he will finish his contract with the Panasonic Wild Knights in Japan following the World Cup.

In a statement, the club said that after extensive consultation between the Brumbies and Wallabies medical staff along with other expert advice, it was agreed that Pocock will not be available for Super Rugby selection in the immediate future.

The Brumbies said Pocock’s injury is a rare calf strain that is not progressing as hoped and needs further time to heal.

“It has been frustrating,” Pocock told gathered media on Tuesday afternoon. “I took December off and tried to get my body tight and then the first day of the camp in January I strained my calf. Since then it has been an ongoing issue.

“You are putting pressure on yourself to get back out there and you want to be contributing but after talking to Dan [McKellar] and Phil [Thomson], I will take the pressure off and try and get it right.

“I certainly hope to contribute off the field for the rest of the Brumbies Super Rugby campaign.”

Pocock, who made 112 Super Rugby appearances and scored 19 tries, made his debut for the Western Force in 2006 and spent seven seasons in Perth before joining the Brumbies at the end of 2012. He said the Brumbies had given him a home for the last seven years.

“Reflecting on my time in Canberra, I am very grateful for the opportunities I have had here,” he said. “The Brumbies have supported me through injury and given me the opportunity to work on my game and my leadership as part of an incredible group of men,” Pocock said.

“After 13 years of professional rugby, I’m looking forward to the challenges the rest of this year holds and also thinking about what comes next.

“The Brumbies and all supporters have been very good to me since my move to Canberra in 2013. I am grateful for their support. Over the last seven years, Canberra has well and truly become my home. Em [his wife] and I love living here and being part of the community.”

Pocock will now turn his attention to be fighting fit for the Wallabies World Cup campaign in September.

“To pull on the Wallabies jersey again is my goal. It is a huge honour and something that I love doing so I will do everything I can to get myself right and get into the best shape I can,” he said.

“If I was realistically a chance to get back for the Brumbies I wish I could but I don’t think that is realistic.”

Roslyn Russell - 45 minutes ago
My little granddaughters will adore it! View
Opinion 3

@The_RiotACT @The_RiotACT
With no specific laws in place, the Fair Work Ombudsman is encouraging employers and employees to take a collaborative approach to COVID-19 vaccinations https://t.co/XedmlGg8Ie (47 minutes ago)