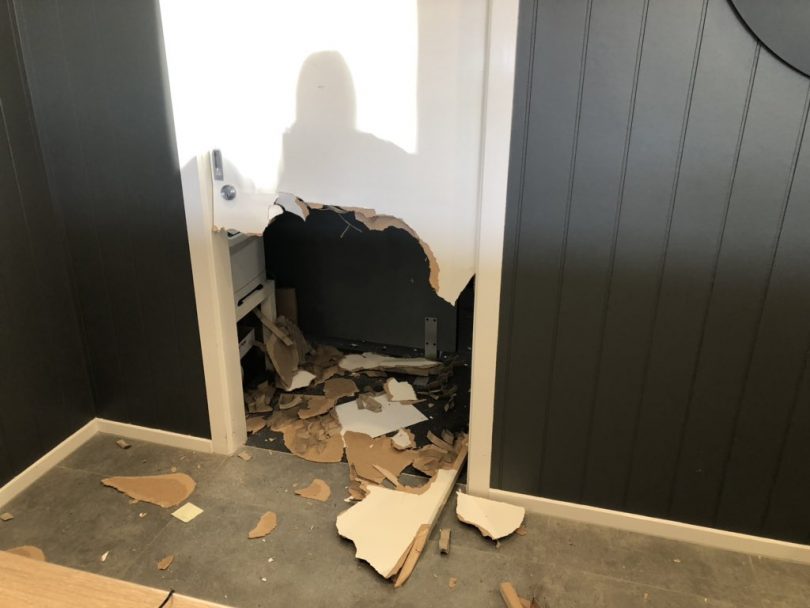 A door has been kicked in during the incident. Photo: Kellie Sloane.

Victorian Labor MP Will Fowles has been questioned by ACT Policing regarding a disturbance at a Kingston hotel on Thursday morning (25 July).

Around 7:50 am, police received a report of a disturbance at the Abode Hotel in Kingston, which patrol officers attended and resolved.

Police would not name the man but multiple news reports identified him as Victorian Labor MP Will Fowles. It is alleged Mr Fowles had a disagreement with staff about access to his luggage.

In a statement, an ACT Policing spokesperson said they would not comment on whether a particular individual is under investigation or not due to privacy reasons.

“Police are investigating the circumstances surrounding the incident in consultation with the business owners,” the spokesperson said.

“At this time, no charges have been laid.

“For privacy reasons, ACT Policing cannot comment on whether a particular individual is under investigation or not.”

So here’s the latest. A politician (I don’t know who) has gone into a rage after discovering he couldn’t access his luggage. Police say he’s now calmed down but is facing charges. pic.twitter.com/VRKu5p2s2t

Dean Carlson - 13 hours ago
Don’t let a noisy minority say they're talking on behalf of the town. This school is desperately needed and the proposed si... View
Kristy Norwood - 15 hours ago
I am 100% for the high school and it's location, as for the park it's government owned and they will do as they need, if they... View
savebungendorepark - 1 day ago
We should be clear. This isn't about "us against them". Virtually everyone who's campaigning to save the Park supports a high... View
News 8