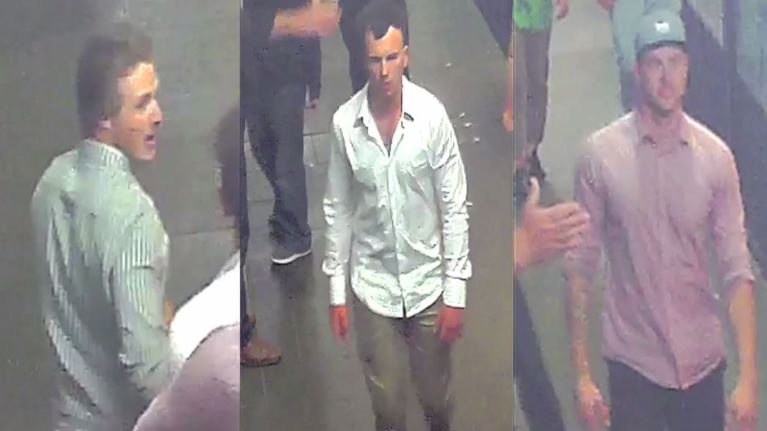 A man suffered facial injuries and underwent emergency surgery at the Canberra Hospital after being knocked unconscious by a hit in the back of the head in a “coward punch” attack in Bible Lane, Civic, early on Sunday, October 30.

Police are seeking to identify three men involved in the assault of three other men, including the “coward punch” attack, which occurred at around 1.20am in Bible Lane next to Academy nightclub.

Police want to identify and speak to three alleged male offenders pictured above.

A group formed in Bible Lane at around 1.20am that morning and an altercation occurred in which three men were assaulted.

Afterwards, one of the victims was approached by another male who “coward punched” him in the back of the head, knocking him unconscious.

The three alleged offenders then fled on foot.

The male who allegedly threw the “coward punch” is described as Caucasian in appearance, 170cm (5”7’) tall, of slim build with brown hair. He was wearing a green pin stripe long-sleeved shirt, dark pants and brown shoes.

The second male is described as Caucasian in appearance, 180cm (5”11’) tall, of medium build with brown hair. He was wearing a white long sleeved shirt and dark trousers.

The third male is described as Caucasian in appearance, 185cm (6”1’) tall, of medium build. He was wearing a pink shirt, dark trousers and a blue baseball cap.

Police are urging anyone who may have witnessed the incident who have not yet spoken to police, or who can identify the offenders to contact Crime Stoppers on 1800 333 000, or via act.crimestoppers.com.au. Please quote reference 6029089. Information can be provided anonymously.