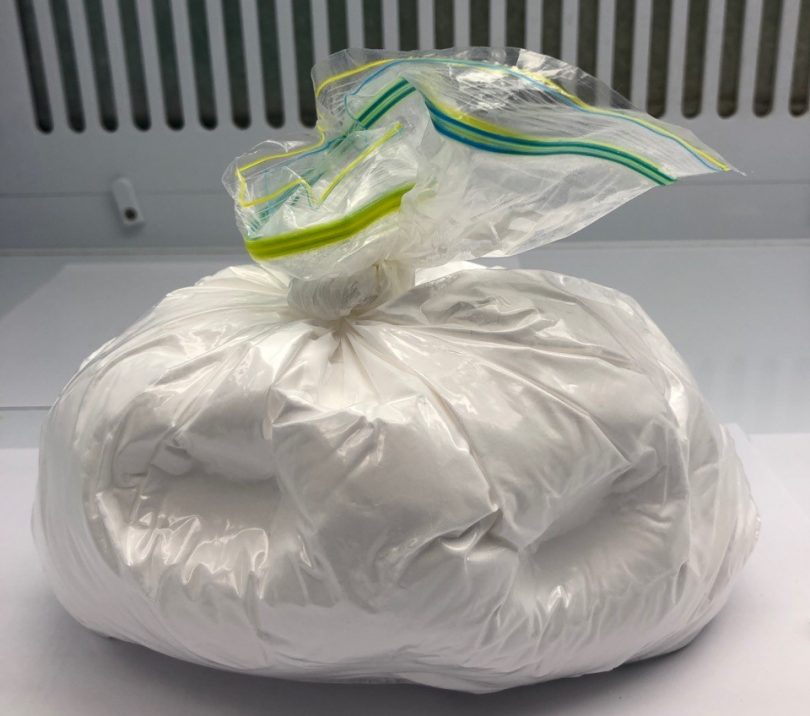 The half a kilo of cocaine bound for Canberra users. Photo: ACT Policing.

ACT police have intercepted cocaine worth nearly $400,000 after a tip-off from the public.

Assisted by a drug-detection dog, police searched the vehicle and found about half a kilogram of a substance believed to be cocaine. The estimated current street value of the cocaine is $385,000, and police believe all of it was destined for distribution within the ACT.

A man is currently assisting police with their enquiries.

Detective Acting Inspector Robert Rose, of ACT Policing Criminal Investigations, said this seizure showed police and the community were working together to prevent drugs being sold to the Canberra community.

“We appreciate any information from the public that leads to an arrest, and this tip-off means hundreds of thousands of dollars of illegal drugs are off Canberra’s streets,” Detective Acting Inspector Rose said.

“This is a very good result for us and the Canberra community.

“If you’re trying to sell drugs in the ACT, no matter how careful you think you’re being, remember there’s always someone who could tell us what you’re doing.

“By seizing these drugs we are reducing drug harm. This results in stronger families and a stronger community. We are committed to disrupting the supply of drugs to our community, and reducing the damage they cause to so many lives.”

Police urge anyone who has any information regarding the manufacture or sale of illicit drugs to contact Crime Stoppers on 1800 333 000, or via the Crime Stoppers ACT website. Information can be provided anonymously.

Capital Retro - 1 hour ago
Forget the "the significant costs and operational requirements associated with the program." being the reasons. The risk is u... View
ChrisinTurner - 3 hours ago
It is amazing how the number wishing to return home has remained constant despite over 100,000 returns. View
Opinion 84

chewy14 - 2 hours ago
The solution to this is simple. Instead of building more public housing, the government should divest itself of almost all of... View
JC - 13 hours ago
So so true. With social media such as this type of site and Facebook etc so many political decisions these days are about opt... View
Food & Wine 2

dulynoted - 3 hours ago
the electricity market in australia seems rigged, we pay way more for electricity than other countries with similar generatio... View
Capital Retro - 4 hours ago
Then there is the "thermal runaway" risk if these things catch fire: https://stopthesethings.com/2020/03/01/giant-batteries-b... View
Ol L - 4 hours ago
This would be great however I foresee yet another hike in electricity prices if it goes ahead View
Food & Wine 50

Ol L - 4 hours ago
Buying to rent out doesn’t make sense in Canberra. The government costs make for a poor investment, however across the bord... View
Property 1

@The_RiotACT @The_RiotACT
Been struggling to find a builder? CBR builders are run off their feet + some certifiers have been forced to knock back work due to heavy demand https://t.co/fw5smqrSRU (39 minutes ago)

@The_RiotACT @The_RiotACT
The National Folk Festival is looking for a new general manager at a precarious time for the annual Easter event https://t.co/MXXAch4FnU (2 hours ago)

@The_RiotACT @The_RiotACT
The community has rallied around St Bede's Primary School in Red Hill and the Catholic Education Office has guaranteed its future until 2023 https://t.co/6BGz14wswR (3 hours ago)