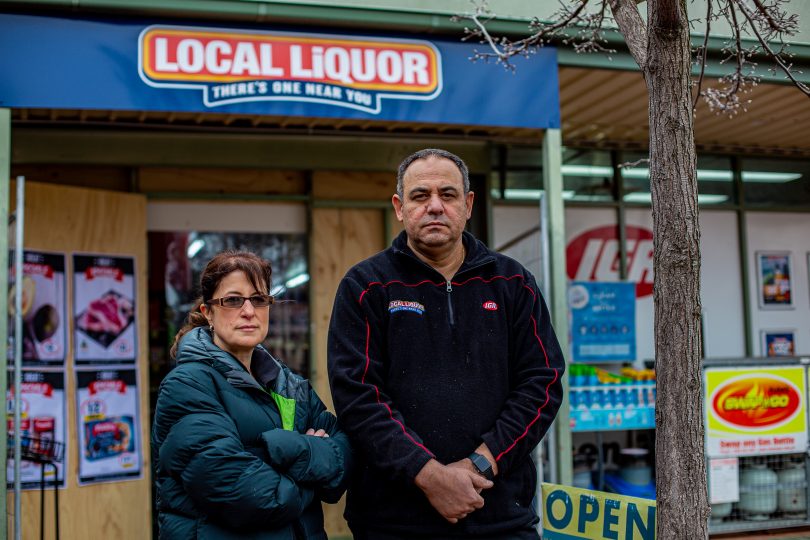 Ngunnawal IGA owners Vicki and Peter Neou were left reeling from the damage to their store. Photos: George Tsotsos.

When thieves ram-raided Peter and Vicki Neou’s store two weeks ago, all that was stolen was six bottles of vodka but it was damage to their storefront that hurt their back pockets the most.

The three thieves caused about $70,000 of damage to the Ngunnawal IGA but left with just bottles of cheap vodka, dropping two on their way out. Part of the roof was destroyed, the registers were severely damaged and the store still does not have a front door.

It was an act of vandalism that took just a few minutes but had lasting effects for the owners.

“They dropped a bottle of vodka in the store and one out the front which the cops confiscated for evidence,” Mr Neou said. “One of them even dropped a ski glove.

“They tried to get into the smokes but they couldn’t get in because it is such a heavy duty container. They were in the store for maybe a minute so they just got in and out. They could have done a lot more damage.

“It’s all this destruction for not much really.”

Just half an hour after the thieves left the scene, police received reports of a ram-raid at the Charnwood Newsagency. A dark coloured Toyota RAV4, which was used in both incidents, was later found burnt out in Spence. 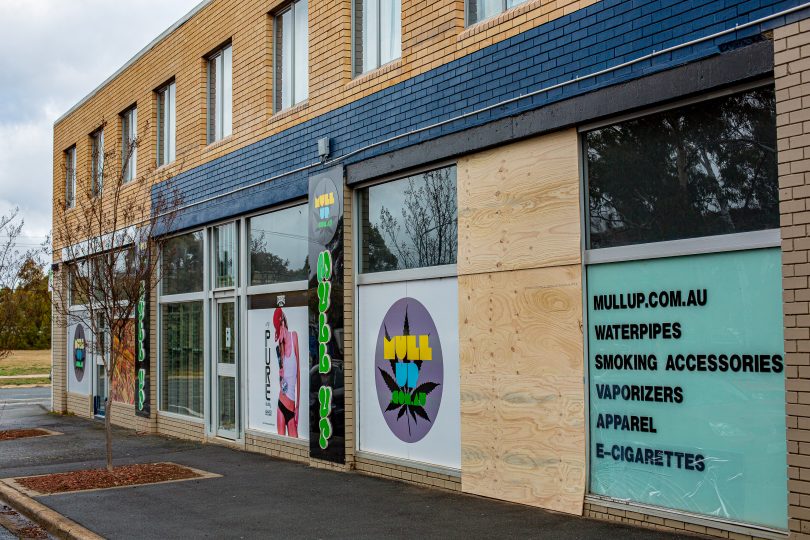 Mull Up smoke store in Mitchell was rammed by a silver Toyota Prado on Sunday morning.

The incident is just a few in a spate of ram-raids across the city, with the latest occurring on a Mitchell business around 5:15 am on Sunday morning (7 July 2019).

Mull Up smoke store, on the corner of Kemble Court and Sandford Street, was rammed, possibly by a silver Toyota Prado, causing around $10,000 worth of damage while the thieves only stole $200 cash from the register.

Owner Chris Burn said he got a call from security and was at his store 10 minutes later but the thieves had fled the scene.

“I don’t understand the logic behind it, to be honest,” he said. “There were three people and I think one was standing guard near the car. It is hard to get a judge of what was stolen and what was broken but around $8,000 to $10,000 in damage but that’s not including the damage to the building as well.

“I think they were in the store for about four minutes. They tried to open the till [but couldn’t] so they just ripped it out and left with the till.”

The ram-raid incidents that have taken place since 23 March:

23 March – Six businesses across Lyneham, Mitchell and Fyshwick were allegedly rammed by a vehicle, believed to be a red hatchback. All six businesses sustained significant damage and some were burgled.

13 June – Around 3:38 am, police were called to attend the Repco store on Athllon Drive in Greenway, following reports of a ram-raid. Police allege three offenders used a dark coloured Toyota Hilux to force entry to the store. Around 4:10 am, two males allegedly used a small hatchback/SUV vehicle to force entry to Domino’s Pizza at Weston.

24 June – Around 3:30 am a vehicle, believed to be a Toyota RAV4, was used to damage the front entrance of the Ngunnawal IGA. Around 4 am, police also received reports of a ram-raid at the Charnwood Newsagency. Police believe a dark coloured Toyota RAV4 was used in both incidents, which was later found burnt out near Owen Dixon Drive in Spence.

7 July – Around 5:15 am, police believe a Mitchell shop was rammed by a vehicle, possibly a silver Toyota Prado. The front of the store sustained significant damage, and a cash register was stolen.

I was in Tuggeranong on Monday afternoon for a medical appointment and I witnessed a black Commodore (NSW plates) with 4 young men in it collide with a red Corolla then speed off. The Corolla was badly damaged but fortunately the two occupants were not injured but visibly very shaken up.

The Corolla driver immediately tried to phone the police to attend as there were several witnesses there to assist. One hour later he was still trying to get hold of the police.

I had someone run up the back of me about 500m from the Tuggeranong police station. They took almost 3 hours to arrive.

The policeman complained about their low level of staffing at the Tuggeranong station compared to the level of issues they have to deal with. Bikie Gangs in particular.

There was a report in the Canberra Times a number of years ago stating that often there was only two Tuggeranong policemen on active duty in the evenings. No wonder the criminals are getting away with so many crimes down that part of town.

Paul Morshead - 7 minutes ago
Graeme McLennan you finally made a “list” View
Troy Scott - 1 hour ago
I think I will boogs I was pretty good at it at 7 View
Steve Hugler - 4 hours ago
Troy Scott there’s still time for you to make a shot put comeback mate. 3 years and you could be at the Olympics!... View
Community 37

Coral Alexander - 18 minutes ago
Charlotte Ellen yuuus as if you could miss it. Paola Leon you in?... View
Caroline Le Couteur - 2 hours ago
Please don't release a heap of plastic rubbish. We have enough problems.... View
Tracy Parker - 3 hours ago
Perth do a duck derby every year where around 15000 are released, they re use them and collect them all at the end of the eve... View
Sport 19

Dave Horsley - 20 minutes ago
How would a club like Penrith convince quality players to travel 6+ hours every week plus training when they could just join... View
Sione Nonehh Taufui - 39 minutes ago
Sione Taufui ouaaa 😂😂😂 party party... View
News 238

Lucy Doan - 21 minutes ago
Pls plant trees like those in inner North or inner South, do not convert new suburbs into Belconnen-style please! View
Jarrad Job - 2 hours ago
Doug Hovi Have to replace all the trees they cut down to make room for all the solar farms in the future🤣... View
Robert Woodrow - 3 hours ago
Tahlia Bruce or possibly not .... View
Lifestyle 30