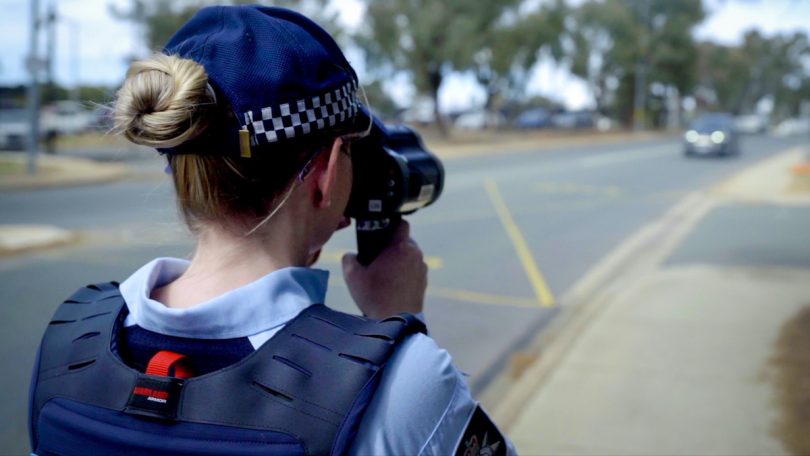 ACT Police were dismayed by the actions of some drivers over the long weekend. Photo: ACT Policing.

At least one driver was detected travelling more than 45 km/h over the speed limit every day in the ACT over the Easter weekend.

“The majority of people complied with the road rules,” he said.

“However, some were still speeding. The highest we saw was 147 km/h in a 60 zone, which is just stupidity.”

Over the course of the weekend, 160 infringements were issued, mainly for speeding.

While drink and drug-driving offences were down for the Easter period, he said high levels registered by drink drivers were concerning.

These included three drivers involved in collisions, all detected at more than double their legal blood alcohol limit.

“It is concerning that we are still seeing people who are not just miscalculating some drinks, but are just completely ignoring any sort of concern for any other member of the community and that they drive well and truly intoxicated.” Acting Inspector Macklin said.

Over the course of the Easter long weekend, almost 30,000 breath tests were administered, with 48-related charges given.

There were 1029 speeding infringements were detected in the area, along with 47 restraint infringements and 17 people caught driving on their mobile phones.

In particular, a 38-year-old man was allegedly detected travelling at 199 km/h on the Hume Highway at Mittagong on Monday (18 April) morning.

The Oaks man had a provisional driver’s license which was immediately suspended and his registration plates were confiscated.

He is due to appear at Moss Vale local court on 31 May.

NSW Traffic and Highway Patrol Commander Acting Assistant Commissioner Paul Glinn said that despite double demerits being in place across the Easter long weekend, many drivers failed to do the right thing.

“Drink driving and speeding were some of the most common offences detected on NSW roads this past weekend,” Acting AC Glinn said.

“The blatant disregard for road rules shown by many was astounding.

“Our message to road users is simple – police can be anywhere, anytime and we’ll be targeting high-risk behaviour, including drink, drug, dangerous and distracted driving.”

Double demerit points will be in effect again in the ACT and NSW for the Anzac Day weekend, from Friday, 22 April to Monday, 25 April inclusive.

Acting Inspector Macklin warned police will yet again be out in force.

“If we could avoid all the stupid speeds we saw this past weekend, that would be great,” he said.

“We’ve got pretty easy traffic laws to comply with; if people could just do the right thing, it would make our lives a lot easier.”

“With another long weekend approaching, police are again preparing to run another high-visibility traffic operation across the state,” he said.

“Double demerits will again be in place this weekend, so if you’re travelling long distances or simply to the local shops, prepare to see police out and about keeping you safe.”

A bit puzzled. How do the traffic police find extra resources to mount a “high-visibility traffic operation,” around the long weekends (and with the opportunity for double demerits and revenue) and yet cannot deploy these same resources all year round when they can act a deterrent/road awareness education which is more effective. Where are these extra police officers?

Revolving door on the courts,

Speed drink, go in and out lose a license and they just drive without it.

Someone who is doing 147 in a 60 would have such a low IQ they couldn’t hold a conversation.

“At least one driver was detected travelling more than 45 km/h over the speed limit every day in the ACT over the Easter weekend.”
– Why not just catch them on the first day? Why wait and make them speed every day, did they follow this one driver around?

Travelling 45km/hr above the speed limit should result in on the spot license cancellation.

ChrisinTurner i fully agree with you. they should also have the car impounded like in VIC. dont care whos car it is, if youre caught it goes on the back of a truck for 30 days

Speed kills, and perhaps a contributing factor of looking at your speedometer every 5 seconds, instead of what’s around the bend, or for skippy ready to jump out in front or you