PollWatch: Cash-strapped Canberrans would move to NSW towns and telecommute 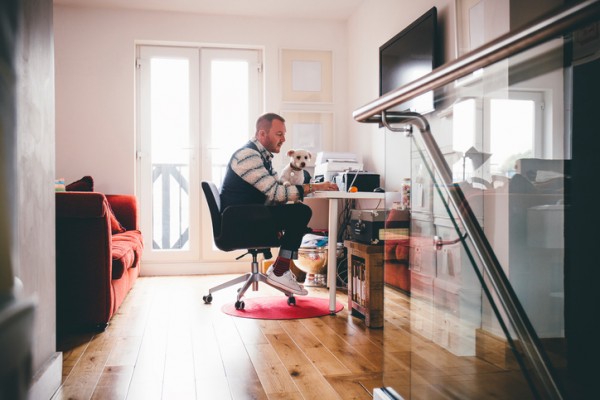 Is remote working from satellite towns the future for Canberrans struggling to afford property here?

Almost a third of Canberrans who responded to our poll on the issue earlier this month say they would consider moving to a neighbouring town such as Goulburn, Cooma or Yass to break into the property market, with 31% (158 votes) of the 513 respondents saying they would do so only if they could arrange to work remotely given the high petrol costs involved with commuting.

Perhaps they were inspired by Maryanne Mussared’s extensive research on tiny houses and living in regional centres.

A quarter of participants (25%, 128) preferred living closer to the action, while 17% (86 votes) would be unable to do so given their family commitments.

Meanwhile, Greg Cornwell argues too much of Canberra’s upcoming residential development is focused on the centre of town, where property prices are high, preventing aspiring buyers from entering the market. We asked you whether you agreed, and of the 476 voters in the poll, 43% (204) felt it made sense to build units centrally given that was where demand was likely to be, 30% (145) felt there was in fact plenty of development going on further afield, and 27% (127 votes) agreed with Greg citing too much urban infill and a high cost attached to apartments that are centrally located.

Speaking of development centrally, there are moves afoot to spruce up Haig Park. Paul Costigan outlined some of his suggestions and urged Canberrans to respond to the ACT Government on the issue during its consultation period. We asked you what you’d like to see in the park, with the clear favourites among the 507 who voted being park benches, picnic tables and a BBQ (75%, 381 votes), a bicycle track and modern playground for children (52%, 262 votes) and more lighting, better visibility from the street and security cameras to make the park safer (44%, 224 votes). More than a third of you (34%, 170 votes) were also keen to see regular events such as markets and outdoor yoga held in Haig Park. Hardly any of you (2%, 12 votes) liked our suggestion for enlarge aviary filled with native birds. 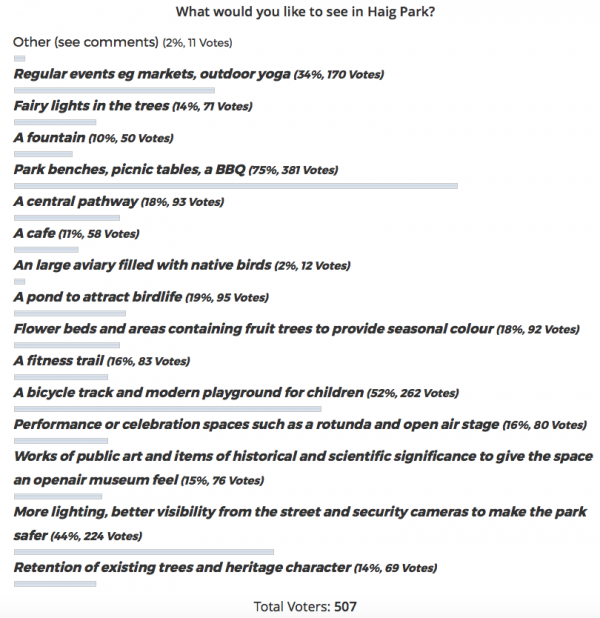 More than a third (34%, 173) felt there was already sufficient regular in-class assessment and alternative methods should be sought to address issues, but a clear majority (66%, 336) disagreed, believing more testing would help teachers assess where to focus their efforts.

One of the hottest (oops, pun unintended) issues of the month so far has been the scheduling originally of the W-League semi-final between Canberra United and Melbourne City FC as a 2pm curtain-raiser to an A-League round game, meaning the women’s match would be played in the heat of the day when temperatures in the high 30s were forecast, and that the team would be unable to play at its usual home ground.

More than a third (34%, 93) of the 274 participants in our poll on the matter were pleased that Canberrans would be able to watch two elite matches in one afternoon, but 39% (108) felt the match should have been held at United’s home ground, McKellar Park, to ensure a real home ground advantage.

The match was eventually moved till after the men’s game ensuring the players were not affected by the heat or playing in a curtain raiser. 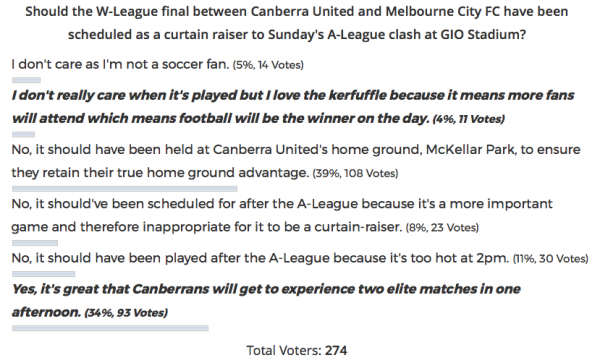 Michael Quirk - 30 minutes ago
Charny Barney bus rapid transport would operate on its own right of way. Suggest you look at the Brisbane metro to be operati... View
Ric Hingee - 2 hours ago
Charny Barney You really are a clown and I suspect a pretty bad one at that. View
Ric Hingee - 2 hours ago
Justin Watson We are talking about rubber wheeled trains running on an imbedded fixed course, not on a normal road. View
ACT Election 55

Ric Hingee - 1 hour ago
Ella - I am surprised you have any money to donate to Labor after paying all the excessive taxes, charges and rates that the... View
Ric Hingee - 1 hour ago
Bethany Williams The minority parties and independents needed to find common ground and run as a team. Otherwise they are pro... View
ACT Election 23

Evan Hawke - 3 hours ago
Darron Marks I totally agree that the roads in Gungahlin use to be shocking and roads like horse park drive needed upgrading.... View
Darron Marks - 14 hours ago
The increased spending to duplicate some of our arterial roads has made a difference you are correct. But to say there wasn't... View
Evan Hawke - 1 day ago
Glory Hammer I totally agree that every area needs politicians who fight for there areas. Most of the politicians in my area... View
Property 10

thebscaller - 8 hours ago
Joke of a leader and party. They are making some bold statements and promises that don’t add up. There is no way these prom... View
Acton - 10 hours ago
A conservative is someone who is averse to change. The Labor Party has now held government in Canberra for 19 years, proving... View
JS9 - 11 hours ago
"The problem would appear to be how to pay for them and it’s not easy to pin down Mr Coe on where the money will come from... View
ACT Election 12

Caz Ireland - 11 hours ago
Anyone remember when Labor shut down all those schools about 15 years ago? They’ve had 20 years in government so their reco... View
Keith Cheetham - 1 day ago
Pork barreling at its best as Labor does. And then dont initialise it. View
Bronwyn Wilson - 1 day ago
Where are e teacher librarians going to come from? There are very, very few in the ACT - that’s why so many schools don’t... View
Lifestyle 9

@The_RiotACT @The_RiotACT
RiotACT readers showed overwhelming support for a more compassionate policy around border closures, but we suspect there'll be less love for election corflutes. Tell us what you think in this week's poll https://t.co/rY3E9tqOnK (27 minutes ago)

@The_RiotACT @The_RiotACT
School holidays are back, and from racing model cars to racing around the Tough Nutterz Inflatable Course, there’s plenty on in Canberra this week https://t.co/LFEwDETxzW (1 hour ago)

@The_RiotACT @The_RiotACT
Around 230,000 people - more than 50% of the current ACT population - would have to move to the Territory this financial year if the Canberra Liberals were to pay for their election promises using their 'grow the pie' model, according to ALP analysis https://t.co/KfWNlGSzz8 (3 hours ago)