ACT Policing’s Criminal Investigations detectives are seeking the assistance of witnesses who could help in determining how a young Korean national was found deceased in a pond near his Belconnen residence on Tuesday morning (September 2).

The 22-year-old Korean man was last seen when he was dropped off by a friend outside his apartment complex in Bruce around 11pm on Monday (September 1).

The body of the deceased was found in a pond near Eardley Street the following day.

Police are still endeavouring to determine the circumstances surrounding his death and track the movements of the man in the hours leading up to his death. 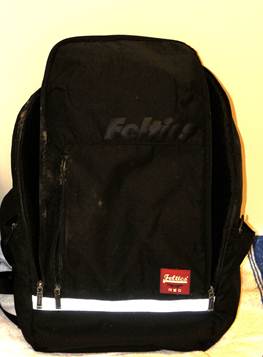 Image of backpack worn by the deceased

Detectives investigating this matter on behalf of the Coroner urge anyone who may have seen or heard anything around the apartment complex in Eardley Street on Monday evening (September 1) or in the early hours of Tuesday morning (September 2) to contact Crime Stoppers on 1800 333 000, or report online via act.crimestoppers.com.au.

Tim Birkett - 8 minutes ago
I wish they'd done the same up in Taree before it was bypassed View
Tramcar Trev - 22 minutes ago
I must be really old, I remember when to get to Broulee it was dirt road. View
Clive John Trenton - 1 hour ago
Come on people. It was replaced for a very good reason! As an old bridge it was likely costing a fortune to maintain due to i... View
Property 15

Greg Myat - 26 minutes ago
Warwick Bradly Take it to Belco where people are, first. Or past asio and russell offices across kings ave. It needs to go pa... View
Greg Myat - 29 minutes ago
Martin Budden Every road will just be one big carpark then. View
Tramcar Trev - 52 minutes ago
$162million for about 1km of light rail does seem excessive. why do they insist on laying the track inn concrete where the tr... View
Community 7

Grahame Barnett - 45 minutes ago
We "bribe" our magpie gang. We feed them. They don't attack their feeders. View
Karen De Britt - 46 minutes ago
Feed her mealworms, she'll come around 😁 View
News 28

whatwik - 57 minutes ago
Ha, try NSW regional travel. Disappointing yes, but prudent. Some of us do wonder about the obsession with the ACT Chief Mini... View
chewy14 - 2 hours ago
JC, No spin here, just facts. Whatwik claims that others have had to backtrack on their plans. Except none of the other state... View
Community 25

@The_RiotACT @The_RiotACT
ACT Attorney-General Shane Rattenbury has announced the appointment of a dedicated coroner in the Territory thanks to a $3.8 million budget boost. It's hoped the reform will reduce lengthy waits for grieving families, and has been welcomed by advocates https://t.co/viru0BQR0J (9 minutes ago)