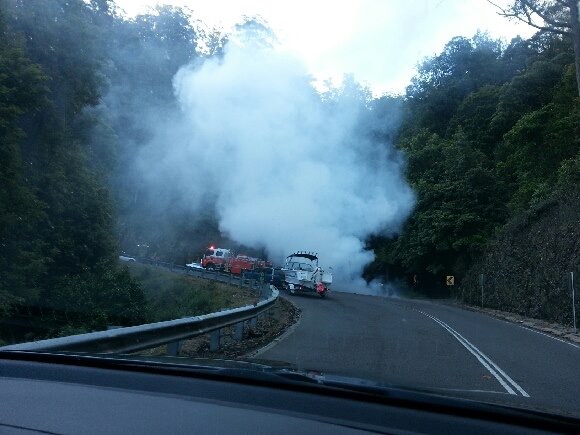 A Canberra mum and her two children escaped from their smoking car shortly before it was engulfed by flames on the Clyde Mountain at around 5.15pm yesterday.

Megan Brown had been looking for somewhere to pull over as she was losing power.

“Pooh Bear’s Corner was the first place I could pull off the road,” Ms Brown wrote on Facebook.

“This corner saved my babies’ lives. Thirty seconds longer in that car and we would all be dead. But we are not.

“I don’t know how or why this happened but we are okey and so is Pooh Bear’s Corner.”

Another Canberran, Michael Domaschenz, witnessed the aftermath and supplied the above photograph to RiotACT.

Mr Domaschenz said a small car was still in flames when he arrived at the scene, and situated about 10m from Pooh Bear’s Corner. The popular spot with children didn’t appear to have sustained any damage. He had slowed down on approach because the smoke had been visible for some distance and he was concerned for his own safety as well as that of those involved.

Mr Domaschenz saw Ms Brown standing a safe distance from the burning car holding one child in her arms and looking worried as the firies worked to extinguish the flames.

He continued on his way and saw the ambulance coming from Braidwood a further ten minutes along the Kings Highway, noting the Braidwood fire brigade has been very quick off the mark to be there so far ahead of the ambulance.

The ambulance took the family to Braidwood Hospital where they were treated for shock.

“Pooh Bear’s Corner was the first place I could pull off the road,” Ms Brown wrote on Facebook.
I am sure if the car had burst into flamers any sooner there would have been no issues with stopping anywhere else before Pooh Bear’s corner and an emergency off-ramp was less than a few hundred meters further down the road, a big sweeping corner half a click prior. Why didn’t she pull over there or just anywhere to the left of the road, it isn’t like that stretch is part of Bolivia’s Death Road where only a single lane exists?
In all probability if she’d pulled up earlier instead of pushing on, the car may have got away with merely a top up of coolant or checking of oils, but instead she now has a charred piece of scrap and a harrowing ordeal. When your car hints to you that something is wrong with it, don’t keep flogging it till it dies, this is akin to pushing your body in a race after you’ve sprained your ankle.
Yes, I am grateful too that they survived safely, but it wouldn’t have been a newsworthy story involving costly emergency services and a hospital visit if the right thing had been done.

Huh? They stopped because her car was about to burst into flames!

You can’t be trying. I can think of lots of more dangerous places to let your kids out of the car to look at this ‘cultural icon’.