Poptop goes to the Roller Derby 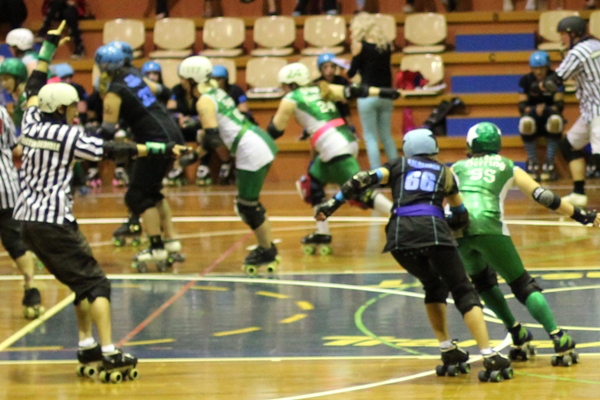 Poptop has been down the Roller Derby and sent in this report:

Here are my pics from last night’s Roller Derby bout between the Surly Griffins and the Black ‘n’ Blue Belles.

Being incredibly vague on the rules, I will not even attempt to describe the play other than to advise the Black and Bluebells trashed the Surly Griffins 243 to 136. That said the bout was exciting, even to the under-informed spectator; I am beginning to be able to follow what is going on and hope that, by the end of the season, I might be able to provide some words on the bout itself.

This was the second bout of the Season and was a sell-out. Buying tickets in advance is becoming a necessity rather than a convenience. With doors opening at 5pm for a 6pm start, we arrived about 4:50 and joined the queue just at the doors to Southern Cross Stadium.

The crowd is motley [partially because a noticeable number had dressed up for StarWars Day], the music loud and crowd pleasing and there is a feeling of being part of the best thing on in Canberra early on a Saturday night. The League is run by and for Roller Derby players and it is difficult not to love a sport that has its tongue so firmly planted in its cheek. Every player has a Derby name, a few memorable ones for me include: Kitten Kaboodle, Dread Herring, Skanky Pants, Mae Q Sqwheel and Harlot O’Scara.

To add to the excitement of this bout, Trick Pole Dancing Studio provided the half time entertainment. As you can see from the pics, some of the pole dancers are also Derby Girls and clearly have more energy than is really sensible.

As the Roller Derby bout is generally finished shortly after 8pm, you have the option of joining the teams at the Southern Cross Club or proceeding on to whatever else you have planned for your evening.

The next Bout is between the Bridabelters and the Surly Griffins on 22 June, at Southern Cross Stadium. Buy your tickets early, I can see that they will become more difficult to get as word gets out about the Canberra Roller Derby League.

You too can send us images and words to images@the-riotact.com .

And yes, the Belle’s hammered the Griffs who looked somewhat like jawas in their little green hooded cloaks 🙂

I can see by your photos, poptop, the enthusiasm you are feeling….lol

Darron Marks - 36 minutes ago
When the construction moves so will the priorities for Government to build new infastructure. And it would have been the same... View
News 18

Jason Preston - 2 hours ago
Buying your vote with your kids View
Jesse Mahoney - 6 hours ago
Y'all are arguing with someone who likes Pauline Hanson. I wouldn't waste your energy View
John Hartley - 6 hours ago
Labour drunk on money till there is none left then tax go up there a joke and have and will be for a long time View
Lifestyle 8

Toni Higgins - 2 hours ago
Shame facebook cant b used for good only instead people like to b nasty and put people down all the time.wonder if they would... View
News 7

Jess Peil - 3 hours ago
This is so exciting! View
Roland De Saxe - 6 hours ago
Great idea for Eden area View
Talla Mc Bogan - 11 hours ago
happened in the otways ,, mountain bikes took the moto tracks ,, they only use a small area though ,, so plenty of moto track... View
Property 3

Scott Humphries - 8 hours ago
"Braddon of the south" . So the light industry and commercial businesses will eventually be pushed out by apartments, just as... View
Marc Edwards - 10 hours ago
And 5 minutes later the residents will all start complaining of the noise etc. Some areas should remain commercial, not every... View
Jp Romano - 14 hours ago
A great area - great building and a great developer. View
Opinion 31

Charny Barney - 14 hours ago
Are there any more policy promises they are going to back flip on? Alistair's indecision and poor decision making is not a go... View
Sue Ellen - 19 hours ago
Elroy Jones Yes. It's one of the prettiest areas of the lake. It used to be nicer before they bulldozed all the trees on the... View
ACT Election 20

The first week of the election campaign proper has come and gone, and one thing is clear - no one...
ACT Election 18

On The Campaign Trail today, the Liberals put light rail back on the agenda, Labor focuses on maternal and prenatal...
News 18

Canberrans won't be catching the buses from an underground city interchange after the idea was canned due to the cost....
ACT Election 20