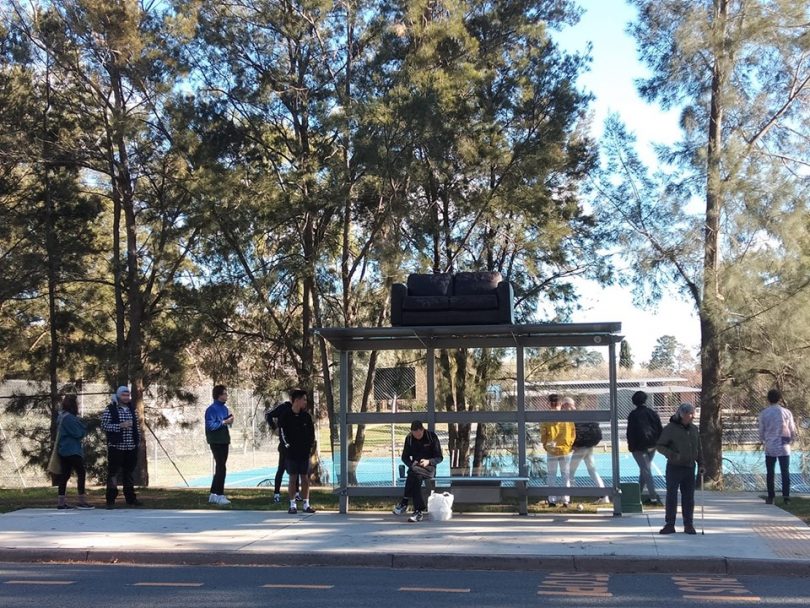 This couch was placed on top of a bus shelter near Narrabundah College on Saturday (4 April). Photo: Ali Bryant.

Is it a comment on Canberra’s new bus network or just the work of a new breed of ‘lounging’ pranksters?

Couches have started appearing on the top of Canberra bus shelters in Kaleen and Narrabundah in the last eight days with speculation rife about whether this is a special new upgrade, or if the city is about to get double-decker buses, or perhaps if it’s just somewhere to wait in more comfort “for a bus that may actually not be coming”.

While many people are seeing the new bus shelter ‘installations’ as funny and some are welcoming them as ‘street art’, others are calling them vandalism or a safety issue, and a number of people are making the obvious timing link to the unveiling of the new bus network.

“Maybe they need a couch and a bed and an esky full of food before a bus comes along on the new timetable….,” was one comment on social media.

“Well at least the bus shelters are being used for something … cause apparently during the week there were no buses,” commented someone else.

The first couch appeared on a bus shelter in Maribyrnong Avenue in Kaleen on Sunday 28 April – the day before the ACT Government’s roll-out of the new bus network as part of a new integrated public transport system. 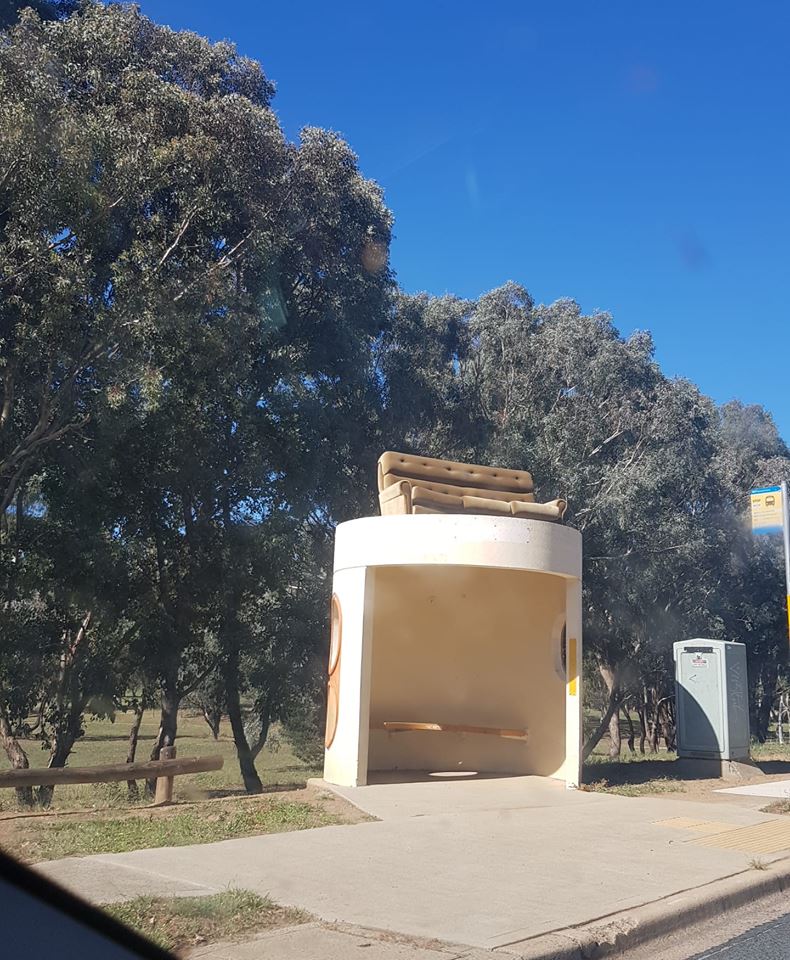 Local Rod Armstrong posted a photo of the couch on Facebook saying it provided a “new upgrade for Kaleen bus stop”. Others reported seeing a second couch on a different Kaleen bus shelter.

Then on Saturday (4 April), just six days later, another couch was spotted on the top of a bus shelter not far from Narrabundah College – meaning the trend is spreading.

Ali Bryant posted a photo of the couch to Facebook and told Region Media he thought Canberrans are likely to see more couches on bus shelters in the future.

“I think the people who did this despicable act must have copied those from Kaleen,” Ali said, with his tongue firmly in his cheek.

He said he suspects students probably put the couch up on the bus shelter but has no idea how they got it up there.

“I still use this bus stop and will continue to use it, perhaps even from the top of the stop!” he quipped.

The social media reaction to the placement of the couches has been mixed but has included many comments relating to dissatisfaction with the new bus network, which is currently the subject of two petitions. One of these, started by 18-year-old Imchan Raman, has already gained more than 5,100 signatures.

“With new bus timetable and routes, the couch might come in handy when waiting for a bus that may actually not be coming,” wrote one social media commentator about the bus shelter lounges.

“The sofas are being provided by Transport Canberra as a service for passengers while they watch several full buses drive past,” wrote another.

However, people have also commented on social media about possible safety concerns.

“I drove past about 45 mins ago and three stupid teens were climbing up to sit on it!” commented someone early last week in reference to the Kaleen bus shelter couch.

“I didn’t know this was a thing…. the couches will be a joke until the bus shelter roof fails and it falls on someone injuring them,” commented someone yesterday about the Narrabundah couch.

A spokesperson for ACT Policing told Region Media that the couches were not really a police matter as they were really a ‘littering’ problem, particularly if they were left there for long. He suggested it was a matter for the ACT Government.

Region Media contacted Transport Canberra but was still awaiting a response at the time of publication.

Very funny and obviously should come with the slogan, ‘Make Yourself Comfortable’ you’ll be here a while.
Lorena