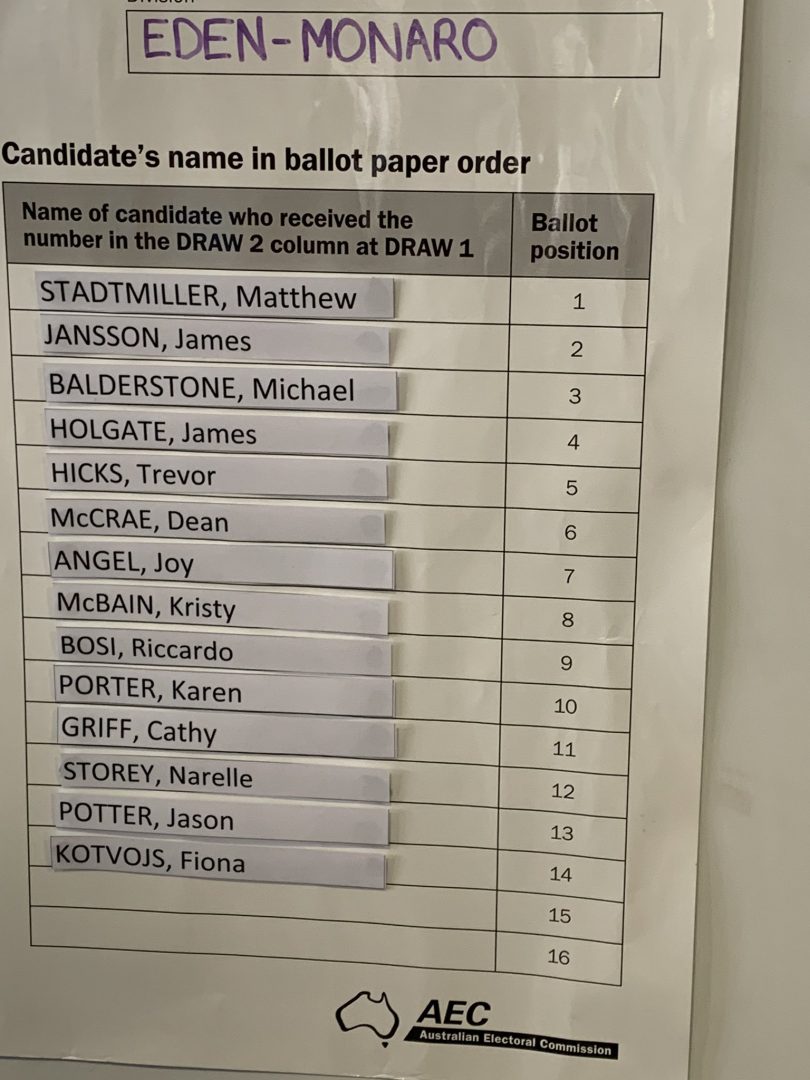 The ballot draw for the Eden-Monaro by-election. Photo: AEC.

Voters in Eden-Monaro are urged to think ahead and plan how they will cast their ballot in the 4 July by-election.

The Australian Electoral Officer for New South Wales, Warwick Austin, said in the current COVID-19 pandemic it was more important than ever to consider the range of in-person and postal-voting options available.

“My message to voters is to carefully consider your personal circumstances and seek information from the AEC website early,” Mr Austin said.

While applications for postal votes can be lodged with the Australian Electoral Commission (AEC) until 6:00 pm on Wednesday, 1 July, Mr Austin stressed it was important to apply early.

“If you need a postal vote, please don’t leave it to the last minute,” he said.

“For some locations, an application left until the last minute creates the risk that we just simply can’t get ballot papers to you, despite our best efforts.”

Mr Austin said the AEC is also factoring in the rapidly changing COVID-19 environment into the provision of voting services and throughout the broader by-election process. He said the health and safety of Eden-Monaro voters had been at the forefront of by-election preparation.

“People who cast their vote in-person will notice a different voting experience to what they may have encountered in the past with a number of social distancing and hygiene measures to be implemented,” he said.

“For this by-election, we are implementing a range of safety measures, consistent with advice sought from government health authorities.

“This will include guidance for voters regarding appropriate social distancing and hygiene in the polling place. Hand sanitiser will be available and voting screens will be regularly cleaned by AEC staff,” he said.

Setting up in Queanbeyan ahead of #EdenMonaro early voting starting tomorrow. COVID-19 safety measures mean it will look a little different.

The ballot draw for the by-election was also conducted last week, with Matthew Stadtmiller from the Shooters, Fishers and Farmers Party drawing number one on the ballot paper.

Mr Stadtmiller’s home town of Harden is located 20 kilometres outside the north-west boundary of the electorate, which spans 41,617 square kilometres from the east coast to Yass and down to the Victorian border.

A record number of 14 candidates are standing for election in the seat left vacant by Mike Kelly, who resigned earlier this year for health reasons.

Positions on voting forms for the seat were decided at a draw conducted by the Australian Electoral Commission last Wednesday afternoon at Queanbeyan.

For more information about the Eden-Monaro by-election, including voting COVID-19 safety measures and support for voters with a disability, visit the AEC.

Granni Lukins Richard Joyes I would vote for him

Slater Ryan idiots if they don’t

Capital Retro - 42 minutes ago
Climate change was happening when this old denier went to school - we studied it as a natural thing. In fact, it has been hap... View
Maya123 - 3 hours ago
More realistic of them to accept that climate change is happening and not ignore the research of those working in the field a... View
Jo Hann - 4 hours ago
Christopher Stuart Veilands how do they brainwash kids in schools when they've never been in government and have no say in th... View
Community 1

Sonja Eldridge - 1 hour ago
Congratulations to all the winners esp my friend Wendy Beckingham!... View
News 14

chewy14 - 1 hour ago
Wait, So you think a government retrospectively changing legislation to prevent a development is a reasonable example of poor... View
JS9 - 5 hours ago
True, but it should also be remembered that prior to the government taking a relatively extraordinary step of legislating to... View
News 18

Jeff Smith - 2 hours ago
Did you know the small Taylor public Primary school in Kambah is above capacity whilst the nearby combined Primary & High sch... View
Kathy Sepulveda - 3 hours ago
Jessie Nicho I'm a little late to this but I agree with you 100%. All the money is going into the Northside Public Schools an... View
Business 23

Lynda Galt - 2 hours ago
Good luck it will be great for Yass View
Lyn Smith - 2 hours ago
They'd better! It would be great to see this restored! View
Neil Thompson - 6 hours ago
Andrew Turnbull, great bloke to get on the piss with as well. View
What's On 1

Lucas Hayden - 3 hours ago
This is one of the best facilities ive ever seen...... I am not a "horse" person but I almost became one just walking around... View
Sport 2

Trish Casey - 4 hours ago
Mark Parton has helped age care and those with disabilities living in ACT housing more than anyone .we have had 3 break ins t... View
Mark Parton MLA - 5 hours ago
It’s my job to help constituents and It’s my job to hold the government to account. I’ll continue doing both. View
Capital Retro - 6 hours ago
Nailed it. View
News 2

Robyne Mitchell - 5 hours ago
How many years have they been promising this? View
Opinion 63

Steven Campbell - 6 hours ago
Reducing posted speed limit is simply government’s way of running away from their responsibilities. Laws are only as effect... View
Opinion 73

Capital Retro - 6 hours ago
Spot on. What goes on behind the scenes is usually at odds with the "clean & green" propaganda we hear. Just like a wind "far... View
show more show less
*Results are based on activity within last 7 days

GRAPHIC CONTENT: Please be aware some readers may find this court report highly disturbing. A Canberra boy, not yet 16-years-old,...
*Results are based on activity within last 7 days

@The_RiotACT @The_RiotACT
The Budget is good news for public servants with more than 5,000 jobs forecast https://t.co/lNV4sUmYUB (2 hours ago)

@The_RiotACT @The_RiotACT
Canberra's nurse of the year has been named. Find out how she and her team stood tall as the Weston Creek Walk-In Centre became our frontline during the COVID-19 pandemic https://t.co/KgHd7NHC9V (2 hours ago)