Proof positive that Borders is for women 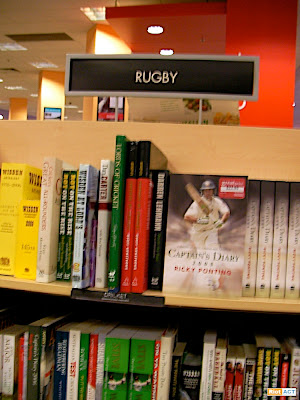 Back in 2006 I theorised that the Borders bookstore in Civic is set up to sell to women and not to men. Some of you foolishly poo-pooed me.

Yesterday, while trying to find my girlfriend in Borders amongst a crowd of other women who look unsettlingly like her (no rushing up from behind for a tickle attack in this heavily decoyed environment), I discovered conclusive proof of my theory.

In the section clearly marked as “Rugby” I struggled to find a single book on the sport.

There are books on Shane Warne, Ricky Ponting, Darren Lehman, Steve Waugh, Andrew Symonds, and lots of Wisden publications. Dan Carter has somehow snuck in amongst the cricketers, but he cuts a lonely figure in there.

Are my opinions really always that unpopular?

Apparently not always, but people are just routinely suprised when we agree with you…

I’m with jakez for once…
If the next article from Jb is about the price increase of scatter cushions, though…

HAHA why does everyone always say ‘I’m with jakez for once’? Are my opinions really always that unpopular?

I’m with jakez for once…
If the next article from Jb is about the price increase of scatter cushions, though…

Well then, does that make us all d*ckheads?

The irony of this thread is how girly the complaint is.

OH NO heaven forfend, the rugby section is out of sorts. Whatever shall we do.

Borders gives me a gigantic intellectual hard on. The range of books is fantastic and if that makes me a woman, well give me a skirt and a handbag.

Regardless, it’s not only Borders that is for women when talking retail.

Bras and Things is also clearly woman-targetted-retailing.
If it was male-targetted, it would just be called “Bras”.

I doubt it would even be called “bras”, perhaps frilly lacy things?

My disinterest in sport is not due to my gender. I know plenty of women who enjoy watching and playing sport with the same enthusiasm i’ve seen in men. I also know many men who could not care less about either cricket or rugby.

I’m trying to push home MY point that johnboy’s original conclusion (that some poorly organised shelving of titles indicates that it’s a shop pandering to women) is inherently sexist.

Nah, it’s just one blokes observation I reckon. Based on generalistation of course, but statistically I think you’ll find it is fact that men enjoy sport more than women (maybe moreso watching sport as opposed to participating) and there seems to be a pretty pathetic sports section in Borders so whilst you might see his article as ‘sexist’, I would say that it’s fair.

And it’s especially fair in the context of trying to instigate some kind of conversation on the topic.

Depends.
Are any of them bodice-rippers, or Jane Austen?

what is wrong with jane austen?

I read it, and so does my wife.

no bodice ripping, though.

Damn. Were we being men again? Shame on us.

To be (slightly) fair on johnboy, he hasn’t been overtly sexist in weeks now.

Pffttt now i remember why i haven’t visited this site in ages.

lux – welcome to the riotact!

Where Sepi never gets tired of complaining and nothing’s ever quite right for her.

lux – welcome to the riotact!

Depends.
Are any of them bodice-rippers, or Jane Austen?

I own hundred’s of books, for the record, and not one of them has anything to do with sport.

I’ve bought books at Borders too.

Should I be confused about my sexuality here people?

Amazon has no aisles.

> If it was male-targetted, it would just be called “Bras”.

Or perhaps “Bras & things in them”?

Keith Prinn - 4 hours ago
Queanbeyan needs this more than anything View
Alan Dalling - 8 hours ago
Jorge Garcia no it's not. Stage 2 will nearly double the commuting time between Woden and Civic. Will remove a couple of hund... View
astro2 - 1 day ago
Yes, I read what you wrote. The mention of Hobart and Darwin is because, as far as I know, these two capital cities are the o... View
News 81

Bethany Williams - 4 hours ago
Charlie McDonald agree! That’s why the Canberra Progressives are going to run lots of candidates at the Oct election (full... View
Jane Kim - 5 hours ago
You could not reach our expectations in a million years, Alistair! View
Benkin Manfish - 17 hours ago
That might even work, if there was any evidence that they could do an even half way decent job.... View
Opinion 26

Michael Roy - 11 hours ago
Amanda Evans an example of one of the failings of a dendritic road network. View
Randy Goldberg - 1 day ago
Matthew Beale Guess I don't travel Parkes Way sufficiently to always see them. View
Shayne Borger - 1 day ago
Canberrans have become a city of whingers and have nothing good to say. Being active and healthy and sport tourism brings $M... View
News 78

Kylie Tinnock - 23 hours ago
Sharon Patrick and that comment is why we do need religious protection. Everyone has their right to practice their beliefs wi... View
News 14

@The_RiotACT @The_RiotACT
After a tough and dry summer, work is underway to grade rural roads in areas including Braidwood, Bungendore and Queanbeyan https://t.co/Y8X7dZJpiT (1 hour ago)

@The_RiotACT @The_RiotACT
The #Brumbies are aiming to end their horror record against the Chiefs in NZ this weekend https://t.co/1rZcqOahWW (2 hours ago)

@The_RiotACT @The_RiotACT
Meet Hannibal, a giant boy with a great attitude looking for the love of a friendly new owner. He's one of @rspcaact's Pets of the Week https://t.co/0wXSI8Sm1U (4 hours ago)