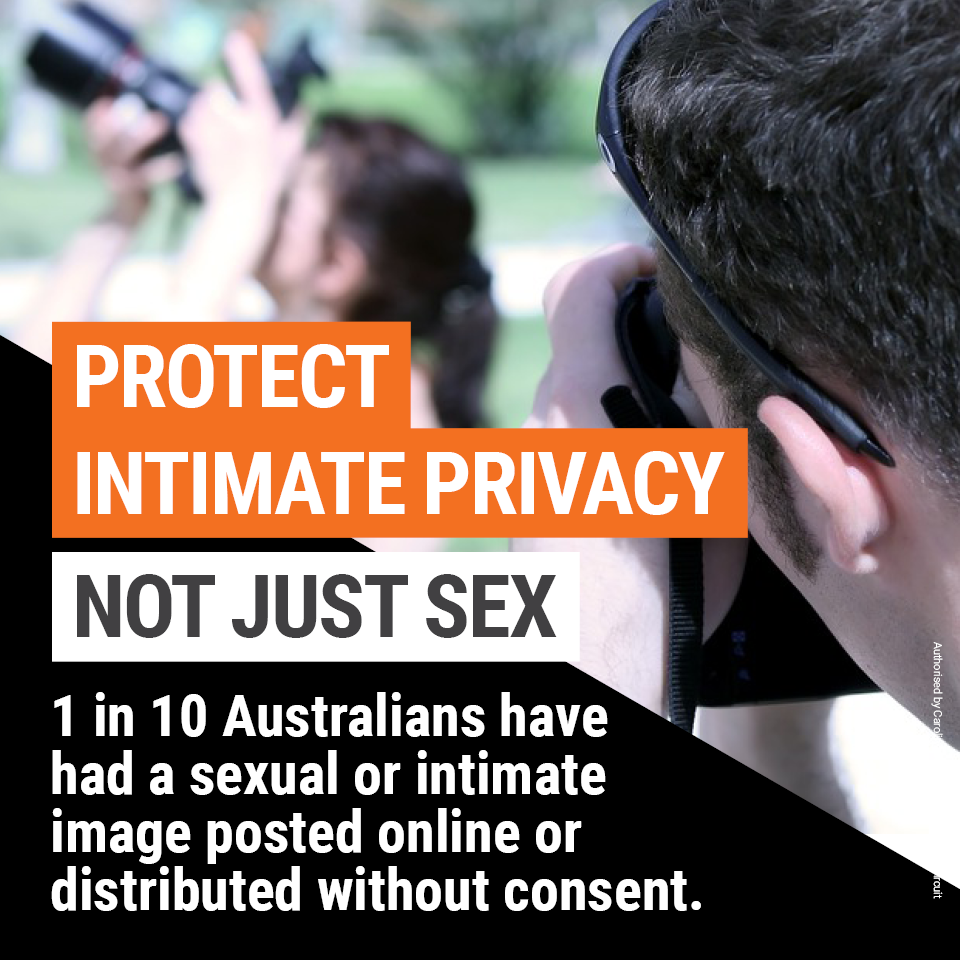 The Greens believe that we need to strengthen ACT criminal laws to specifically address the issue of non-consensual sharing of intimate images. That’s why we have released a discussion paper and draft legislation and are inviting community feedback to ensure we are in step with the experiences of Canberrans. We cannot afford to wait and pretend that this is not a problem for the ACT. Only last year, we saw schools in Canberra linked to a ring of students from over 70 high schools around Australia arranging the distribution of pornographic images of hundreds of young women—behind their backs and without their consent. This year, we saw a man take his own life after threats made by a group of young men to share intimate images of him.

We know ACT laws do not go far enough. We also know that our current laws have not caught up with social trends and technology. New technologies and the ubiquitousness of cameras – on our phones, on our computers, in our houses and stores—have allowed more photography and video/audio recording of people without their knowledge or consent. Social media and the internet make these images easy to share and distribute widely. Our laws have not evolved to adequately and consistently address the impacts of these changes and the consequences can be devastating. On one hand young people are at risk of mistakenly being charged with child pornography offences when images are shared with consent, on the other perpetrators of non-consensual sharing are not being held to account.

The ACT is now out of step with the rest of Australia. Both South Australia and Victoria have brought in offences. New South Wales, Western Australia and the Northern Territory are already in the process too. The Greens’ discussion paper not only lays the groundwork for what we believe is the appropriate approach to some of these reforms, it also tells the stories of victims of intimate image-based abuse and how this despicable behaviour has impacted the lives of thousands of people in the ACT. Our proposed legislation will make it an offence to:

We have chosen to use the term “intimate” rather than “sexual” or “private” to recognise that images and recordings must be interpreted according to relevant cultural contexts and community standards. In a submission to the 2016 Senate Inquiry, an example of “photographs of a Muslim woman without her hijab, if she would normally wear one” was given as an “intimate image”. As a further example, we would suggest sharing images of trans-people from before or during their transition without their permission could be interpreted as an “intimate image”.

While the need for legislation is clear, this is not just a legal problem—it’s a cultural one. This behaviour is the manifestation of technological advances, a growing normalisation of taking intimate selfies and a growing trend of using these images to extort, exploit, coerce, threaten and intimidate others. Such acts are based in power, control and coercion over others. Its increasing prevalence sends a clear and unequivocal message that we as a community need to take this seriously. And it won’t be tolerated.

It is important to recognise that the initial act of documenting intimate or sexual moments is normal and consistent with community standards. We must ensure we maintain a sex-positive lens over any reforms and do not criticise, shame or demean individuals taking part in consensual behaviour that involves sharing intimate images of themselves. The fact that such a high proportion of adults and young people take part in these consensual activities highlights the importance of robust laws around non-consensual sharing and accessible enforcement measures that hold perpetrators to account.

These behaviours are on the rise not simply because of the prevalence of recording devices or destigmatising the documentation of our most intimate moments. These harmful and destructive behaviours are on the rise because malicious, exploitative and abusive individuals – most often, but not always, men – have no reason to fear consequences for their actions. Yet the overwhelming majority of Australians (80%) believe it should be a crime to share a sexual image of another person without that person’s permission. There is a clear disconnect between the law and community experience, and we cannot allow the ACT to fall further behind in its response to this growing crisis.
We’ve waited long enough and now is the time for reform. The draft legislation I am introducing to the Assembly on behalf of the Greens this week will go part of the way to stamping this appalling behaviour out. I welcome your feedback on the legislation and discussion paper, as diverse community experiences and perspectives will ensure the ACT gets the best possible laws to address this issue.

The discussion paper can be accessed in full here. It is to be read in conjunction with the exposure draft and explanatory statement of the Crimes (Invasion of Privacy) Amendment Bill 2017 available here. Community submissions can be made via email to lecouteur@parliament.act.gov.au until 28 July 2017.

I completely agree. This is poorly thought out legislation and I hope it gets shot down.

Yes, individuals need protection in this area but some measure of balance needs to be found.

Have to agree – the definition of intimate, or should I say lack of definition, is potentially very problematic.

Yes, individuals need protection in this area but some measure of balance needs to be found.

DJA - 29 minutes ago
Don't see any blueys in the backyard, but do see dragons (I think they are jacky dragons) and cunningham skinks. View
News 1

Michael Ilsley - 4 hours ago
How lucky are those children going to be being taught by such an incredible person. View
Rhonda Maxwell - 7 hours ago
Brad is an amazing young fella who is living a full life. His family and friends are s wonderful support as is his footy team... View
Pam Perkins - 8 hours ago
A very inspiring young man all the best in all your future endeavours and wonderful community support... View
Community 10

Acton - 5 hours ago
I use a trap which is effective in catching individual wasps and discourages nesting. The trap uses a European wasp attractan... View
Ricky Gill - 20 hours ago
Same as getting burnt the sting from these buggers😞 View
Opinion 54

JC - 6 hours ago
It was a private facility unlike those in Kambah which you describe. The only fault of Government here is that they have let... View
Simon Noffke - 18 hours ago
Sad to see the end of memories coaching there many many years ago View
Community 4

aussie2 - 18 hours ago
Firstly I would be challenging directing all southbound traffic to Woden interchange. We are spread out. Surely those outside... View
chewy14 - 21 hours ago
I actually like what they are proposing here and I think integrating the CIT into the new development space is a sensible mov... View
show more show less
*Results are based on activity within last 7 days

A Canberra father accused of repeatedly beating his wife and choking their daughter will be released from custody after he...
What's On 0

@The_RiotACT @The_RiotACT
Despite their scary appearance, blue-tongue lizards are laidback and loved in Canberra. Ian Fraser asks if there's a familiar bluey in your backyard? https://t.co/pTVszMYre7 (3 hours ago)