Pssss, wanna buy an Olympic Torch? Fresh off the back of the truck! – FOUND 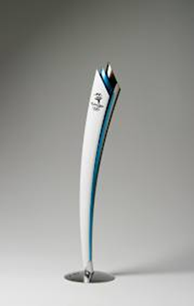 Olympic-athlete Robyn Lorraway is appealing to the public in the search for her 2000 Sydney Olympic Torch, missing from Bonner since Monday (September 10).

Robyn Lorraway competed in the Track and Field long jump event at in the 1984 Los Angeles Olympics and carried the torch during the 2000 Sydney Olympic Relay.

Robyn lent the torch to a family friend, and local primary school teacher, to display during class. Around 6pm on Monday, the friend placed the torch on-top of her car and drove the car between Elia Ware Crescent and Bonner Shops on Mabo Boulevard, Bonner, before realising the torch had been misplaced. The torch was reported missing to police at 8am on Tuesday morning.

“It’s an honest mistake; a lot of people may have placed something on top of the car and driven off before realising. In this case, it’s an item that carries a lot of sentimental significance for me,” Mrs Lorraway said.

“I have great hope that the torch has been found by someone nearby and will be handed to the police as soon as possible.”

Police urge anyone who may have information which could assist in locating the 2000 Sydney Olympic Torch, contact Police Operations on 131 444. If you have located the missing Olympic Torch, please take it to the nearest police station.

UPDATE: The Torch has been returned:

The torch was handed in to Belconnen Police Station this afternoon by a member of the public who found it.

Many thanks for your assistance.

Paul Evans - 15 minutes ago
Last real snow was 1981. View
Nick Anderson - 5 hours ago
Just to add on, the snowy mountains are already feeling the stress from Climate Change: http://press-files.anu.edu.au/downloa... View
Nick Anderson - 6 hours ago
Funny. A ski resort implies that it would still snow in the foreseeable future. A future without severe climate change. Last... View
News 1

Martin Bonsey - 1 hour ago
There has been a very lengthy and expensive 'conversation' about "Very Fast Trains" and "High Speed Rail" also known as bulle... View
Mark Scarborough - 6 hours ago
As long as it is cheaper than flying. View
Justin Watson - 6 hours ago
Yeah it wouldn't be too expensive to get rail travel down to 2 1/2 hrs between Canberra and Sydney. A 1 hr fast train would b... View
Community 140

Allan Glass - 2 hours ago
Well if it's a hazard to the driver maybe they should pay attention to the road. N leave these trees alone. View
Amanda East - 3 hours ago
Noooo.... View
Bec French - 4 hours ago
GO cut something else down!!!! leave them be! View
Food & Wine 129

Kylie Klose - 2 hours ago
We love Leong’s kitchen!!! Amazing food and fabulous service. Many fond memories of dinners and birthday parties there when... View
Opinion 16

Jan Sandra Cornish - 3 hours ago
We could raise their wages and put more money into training them. Rostering changes could work too. Police have different wor... View
Louise Flood - 6 hours ago
A nice idea but how will our esssential workers do this? Nurses, fireys etc. View
Kurt Neist - 7 hours ago
I wash dishes, order supplies and do deliveries. Can’t do any if it from home. At least the pay is rubbish...... View
News 30

Elroy Jones - 7 hours ago
Completely agree View
duc nguyen - 8 hours ago
No one comes to Canberra and thinks the current West Basin is the place to be. Even though it is at the heart of the Nation's... View
Neil Chandler - 11 hours ago
I would have thought that whatever "heritage" the area had, both european and indigenous would have been pretty much devastat... View
Food & Wine 5

Rose Mary - 12 hours ago
David Blanchfield put it on the menu! View
News 4

Greg Garth - 15 hours ago
Gabriel Spacca Or a mixture of smoke and steam. View
Gabriel Spacca - 18 hours ago
If you pour water on fire it’s likely to cause more smoke not less. View
show more show less
*Results are based on activity within last 7 days

While many restaurants identify with their customers via websites and social media posts, the owners of Leong Kitchen know their customers...
Best of Canberra 124

For many, the thought of visiting the dentist can come with a wave of anxiety. But even when you do...
News 74

@The_RiotACT @The_RiotACT
The Great Shower Timer Experiment is about to get underway in Canberra thanks to Icon Water and residents of Gungahlin https://t.co/bLbZPuxVD4 (1 hour ago)

@The_RiotACT @The_RiotACT
Resources developed for virtual excursions to Old Parliament House have been put to good use during COVID-19 restrictions but will also help remotely located students from across the nation to visit the Museum of Australia Democracy https://t.co/grpAeze1pX (5 hours ago)