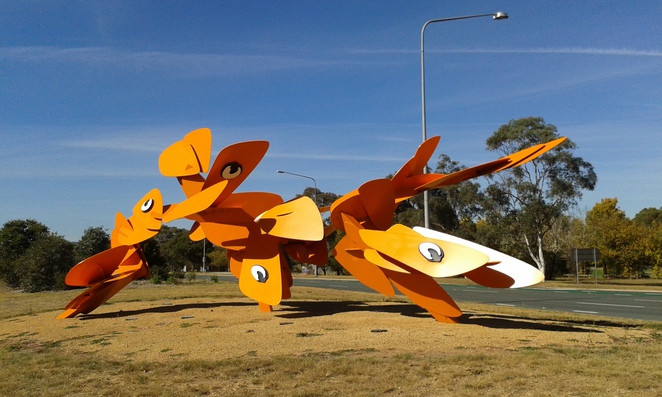 In her report, Selected ACT Government agencies’ management of public art, Dr Maxine Cooper said that while the 117-piece collection was being administered effectively, the ACT needed a public art strategy that “builds on the strength of the existing public art, guides future direction and seizes opportunities for enhancing the ACT public art collection”.

“Ideally, it should be developed cooperatively by the ACT Government, the Australian Government and private sector entities who manage the various, and numerous, public artworks in the ACT,” she said.

Dr Cooper said the ACT should look to other jurisdictions and the private sector to identify a management model to underpin the strategy.

“It would be prudent to explore models used in other jurisdictions that embrace private sector entities’ participation and do not rely solely on public (taxpayer) funding, as has been the case to date for most ACT Government public art,” she said.

“The plan should incorporate: a desired management model; mechanisms for the involved agencies to work cooperatively; and awareness raising of the contribution of ACT public art to the public realm,” it said.

The report says artsACT should develop and implement an overarching risk management plan, as well as a performance measure for public art, and update the Public Art Database so that information is available for all ACT Government public artworks.

It says ACT Government agencies have effective processes for the acquisition of public art but these could be improved including providing better guidance in the ACT Government Public Art Guidelines (2015).

It says the Guidelines need to be revised to more clearly reflect the three acquisition models used by artsACT (commission, purchase and donation), complexities and key decision points within the acquisition process in flowcharts, management of public art on loan to the ACT Government, and cultural and local indigenous community sensitivities in acquiring and decommissioning artwork.

Dr Cooper said that while ACT Government public artworks were in good condition, she recommended a maintenance and repairs plan be developed for each public artwork at the time of acquisition.

The report says artsACT and agencies should work together to devise ways to better protect artworks from damage by contractors.

The commissioning of some public artworks in the ACT has come under attack from the Opposition, which has questioned the cost to the taxpayer.

What do you think of the ACT’s public art collection? Does it enhance the Territory or is it a waste of money? Let us know your thoughts by commenting below.

Most of the public art in the ACT is a barbaric assault on the sensitivities and the wallets of the rates paying public. If people want this kind of rubbish in their homes, fine. However if public finances and public land are involved then I suggest that the decision-makers have a responsibility to choose works that gain wider acceptance from the community.
Too much modern art is created for the benefit of the self-pleasuring artist, not for the artistic nourishment of the long-suffering public. Over the centuries Europe has acquired wonderful street art, mostly based on realistic human forms and themes from nature. They are a delight to behold. What do we get? Modernist shite!
The outer suburbs of Canberra desperately need quality street art , but if all our government can give us is more of this cold and alienating ‘street rubbish’ then I would rather go without. We don’t owe the local art community a living. Perhaps we should consider voting on every new street art proposal? Allowing the government to make these decisions clearly is not working.

I love the art around Canberra, (or most of it). Naturally some more than others. Offhand I can only think of one I don’t like, and it isn’t the owl in Belconnen, which I have no problem with. We would be a duller place without this art. Another city with art, in fact far more than we have, is Wellington in NZ. It is the most exciting city in NZ, and why? Because of the artwork spread around the city. Turn a corner and find more. They are ‘everywhere’ about the CBD, helping make it a vibrant, exciting city. When I first visited Wellington I expected to find a dull place, but it certainly isn’t. We can aspire to imitate.

If people has said through the ages that art was too expensive just think of all the wonderful things in Europe and the rest of the world that would not exist. Art lifts the spirit. They are not instead of public toilets etc.

It was only ‘expensive’ for European art lovers who paid for it out of their own money. And they may have not know anything about art, but they knew what they liked. And wanting to show off, knew what the rest of the local population liked.

If people has said through the ages that art was too expensive just think of all the wonderful things in Europe and the rest of the world that would not exist. Art lifts the spirit. They are not instead of public toilets etc.

My plan is simple and cost effective.

I would like to say I have a favourite sculpture but none of them impress me. Why they happened in the first place baffles me – I think a former Chief Minister was “inspired” after a trip to Spain.

Replace them with something practical like decent and clean public toilets – tourists would appreciate these more.

I have had a quick look at the Auditor’s report. I won’t flatter myself and say it is in direct response to my article on The RiotACT in February this year
https://the-riotact.com/where-does-the-buck-stop/195128
but I am happy that someone is taking the ongoing maintenance of our public artworks seriously. Bert Flugelman’s Tumbling Cubes is in a very sorry state of repair or was the last time I could bear to go and look at my favourite ACT sculpture. Currently, under the ‘custodianship’ of TCCS (formerly Urban Services/TAMS), TCCS are trying to transfer ownership to artsACT. The amount of $42,000 identified to repair this work is, I would suggest, just a bit of an underestimation but at least we have it in writing that the need to repair it has been identified. I also see that the poor maligned Bruce Armstrong sculpture, commonly known as the “Belconnen Owl” has been vandalised yet again… I would love to hear people who live in Belconnen say how much they love this quirky work. If not, perhaps it could be relocated, as suggested in my February article.