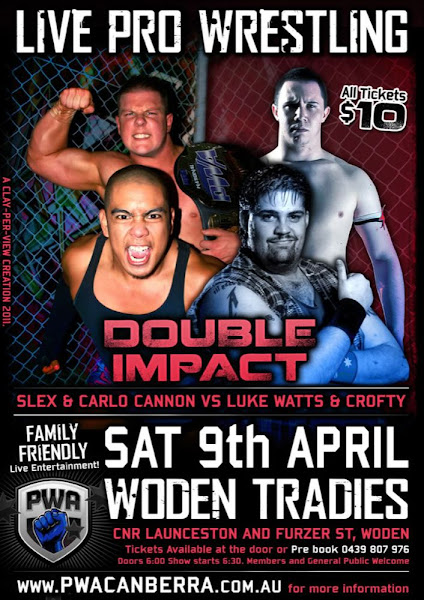 After a massive, standing room only show in February. PWA Canberra is back at the Woden Tradies, Saturday the 9th of April. The Canberra fans were treated to some of the very best wrestling in the country. A new PWA National Champion was crowned as Melbourne’s own Slex defeated crowd favourite Luke Watts.

PWA has been providing monthly action packed pro wrestling to Canberra fans for over four years.

We pride ourselves on delivering the most fast paced, high impact, and most fun wrestling show in the country, whilst doing so in a family friendly environment.

Without a doubt PWAC offer one of the most affordable forms of entertainment today. If you have not seen wrestling or only seen it on TV, you are missing out on all the excitement, atmosphere and drama felt only at a PWAC event.

Lori J Tas - 1 hour ago
Bet the ALP wont do anything either 😒 View
Geoff Richardson - 2 hours ago
Maybe instead of wasting half a billion taxpayer dollars on an unwanted upgrade to the war memorial, those funds could be bet... View
Dave Wilkinson - 2 hours ago
Don't we have a brand new huge national archive in Mitchell...? I worked on its construction with Kms of compactus. View
Community 44

Shane McMinn - 3 hours ago
Quangers, or the Socialist Republic Of Queanbo.. View
MERC600 - 4 hours ago
Quangers has it all over Canberra these days. No graffiti , grass mowed and no rubbish floating about. The other article on t... View
Sport 18

May Mac - 3 hours ago
If the Sydney and Melbourne Buildings could be constructed in separately owned sections which created the beautiful buildings... View
Dingo Dom Shanahan - 4 hours ago
The entire bus interchange needs to be moved and something more needs to be done with the centre of the city’s that more th... View
Robert Hawes - 5 hours ago
The Melbourne and Sydney buildings need some work. Repainting so that there is something other than a car park in the middle... View
Community 4

chewy14 - 5 hours ago
JS9, I agree and it's this sort of rent seeking that does a disservice to what they are trying to achieve. It's actually also... View
Motoring 37

Rhonda Owen - 5 hours ago
Mandy Charlton I was first! View
show more show less
*Results are based on activity within last 7 days

It's higher off the ground than any of its rivals. It has an all-wheel-drive system and driving modes for deep...
News 60

UPDATE 11 June, 9:45 am: The ACT Government has announced that the ChooseCBR scheme has been paused for seven days...
News 60

Retreat-style living in the heart of Bungendore

@The_RiotACT @The_RiotACT
Critics say a 10-year funding crisis is coming to a head at the National Archives. An open letter to the Prime Minister pleads for help to save irreplaceable national assets https://t.co/IOZh6De8k4 (3 hours ago)

@The_RiotACT @The_RiotACT
A former corroboree ground in Belconnen will be renamed in Ngunnawal language after being officially heritage listed https://t.co/QuIXgtygBG (5 hours ago)