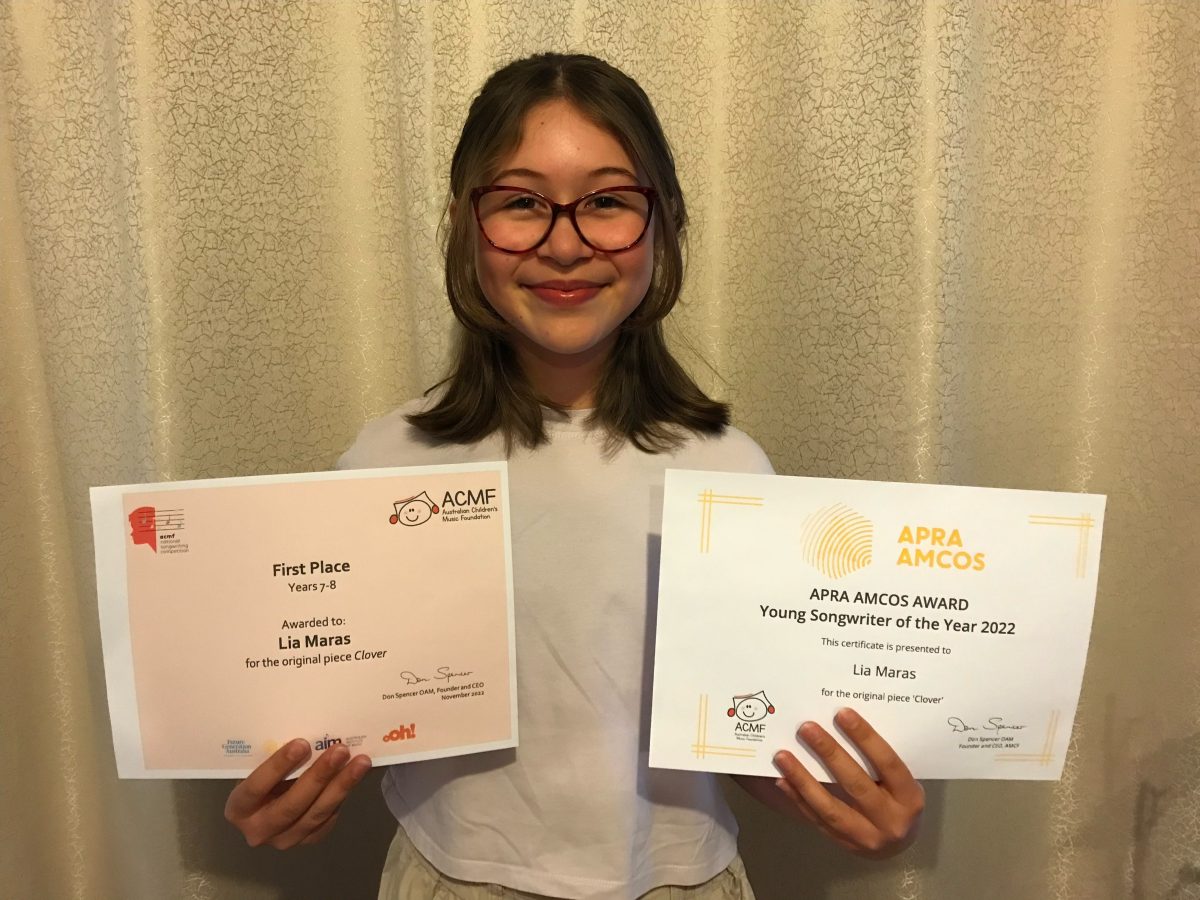 “Shards breaking at the sight of light

“Is trapped within your eyes …”

These are the words that have landed a 13-year-old Queanbeyan West girl not just one but two big wins on the national music scene.

Clover by Lia Maras overtook 1500 other submissions from around the county to snare first place in the year 7 and 8 category of the Australian Children’s Music Foundation’s (ACMF) National Songwriting Competition.

The same entry also had Lia named Young Songwriter of the Year 2022 by the music licensing organisation APRA AMCOS.

“I was very excited,” she says.

“My parents were definitely very proud. I’m not sure about my siblings – I hope they’re proud.”

Lia is in year 7 at The Anglican School of Googong, but can’t remember a time when she wasn’t “doing music”, mainly in guitar and song, with a preference for pop rock. Her older siblings play the saxophone, and she was taking singing lessons at school until the teacher left.

“I mostly teach myself now, sometimes with YouTube videos and other times just by playing around with my guitar and voice.”

She says her songs are largely inspired by the “complexity of people, particularly their variety of emotions”.

She entered the Caroloke competition at the Christmas in July Market at the Queanbeyan Showground last year, and promptly came first in her age group for her performance.

It gave her the confidence to finally go for the ACMF National Songwriting Competition she had seen advertised at the Riverside Plaza so many times before.

“I had always put it off because I wanted to up my skill and write a song I felt was good enough,” Lia says.

Now in its 20th year, the annual competition is ACMF’s nationwide initiative to “encourage creativity and self-expression through songwriting”.

Every year, students from schools across Australia are invited to put pen to paper and enter their original songs. Winners receive prizemoney that can be allocated towards musical equipment or tuition. For first place in the year 7 and 8 category, that’s $1000.

Lia had already written the music for another song, but “didn’t like the words that much” so over two nights, she started again to create Clover.

“Usually I make the music first and then write the lyrics – I find it easier for producing the flow,” she says.

The song is named for its frequent references to the four-leaf clover, a symbol of good luck, and is inspired by someone at her school.

“They’re not necessarily a friend and it might sound a little bit weird, but they have very nice eyes.”

Over three minutes and 10 stanzas, the song goes on to describe these eyes as piercing and penetrating, with lines such as “your gaze tears me apart” and “I’m drowning in your eyes”.

“The universe likes to leave me in the dark, but the only lights I see are the lanterns that are burning in your heart,” Lia sings.

The winners and finalists of the competition were announced on 17 November.

ACMF founder and CEO Don Spencer says the judges were inundated with a record number of entries this year across the five categories, spanning kindergarten to year 12.

“The content and calibre of the song entries astounded the panel of judges,” he said.

“Many song lyrics demonstrated the importance of music and song in helping children deal with their challenges, and this year the judges felt the overall theme of the lyrics was more positive, uplifting and hopeful compared to the last couple of years.”

Lia has already done her prize shopping and bought an electric guitar set, complete with a pedal set and an amplifier, so she can continue honing her skills.

“I’ve written a couple of new songs since the competition, so now I’m focused on writing more and finishing and producing previous songs,” she says.

“I’m not sure what to do after school yet, but I hope to finish my album. I haven’t decided on a name for it yet, but there’s already a few songs in it, including Clover.”

Good job but could have used “sight” instead of “eyes” at the end to make it rhyme.

Congratulations to Lia, what a fantastic achievement, well done. I love your winning song 👏👏👏