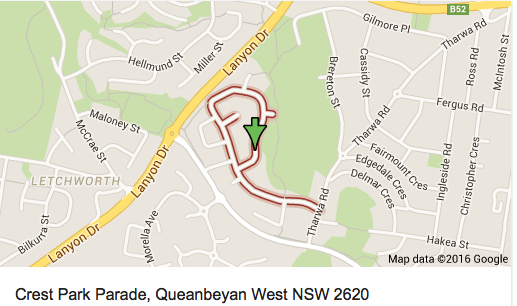 Police are investigating after a home was destroyed by fire at The Crest Park, Queanbeyan, overnight.

The three residents – two men, aged 51 and 25, and a 45-year-old woman – escaped uninjured. Police from Monaro Local Area Command attended and evacuated nearby homes as a precaution.

Firefighters extinguished the blaze but the home was destroyed.

Police established a crime scene, which was examined by specialist forensic officers. Monaro Detectives are investigating the circumstances surrounding the fire and initial inquiries indicate the blaze is not suspicious.

Julie Macklin - 6 hours ago
Unfortunately I would have to keep my petrol car too, as electric cars can't go where I want to drive. Good for urban areas,... View
Brent Hutch - 6 hours ago
Even 200,000 cars at a discounted price of 40k per car, will be 8billion. Obviously this number will increase as more cars ar... View
Gloria Altinger - 6 hours ago
Brent Hutch 12km for 675M.. 85 klm North to south... hmm ok so maybe at least a 100K 50k Electric cars to the roughly 260k re... View
ACT Election 21

Keith Cheetham - 9 hours ago
Pork barreling at its best as Labor does. And then dont initialise it. View
Bronwyn Wilson - 15 hours ago
Where are e teacher librarians going to come from? There are very, very few in the ACT - that’s why so many schools don’t... View
Chris Cross - 15 hours ago
Layla Barry almost $1 TRILLION and counting, courtesy of Federal Liberals, who almost scared the nation into recession with t... View
Lifestyle 9

Lisa Norrie - 16 hours ago
Small minded people with sfa to do maybe take up a hobby get a full time job focus on your family there’s millions of thing... View
Toni Higgins - 1 day ago
Shame facebook cant b used for good only instead people like to b nasty and put people down all the time.wonder if they would... View
Property 8

Paroksh Datta Prasad - 21 hours ago
Adam Burzynski I called it in 2013 hehe View
Adam Burzynski - 21 hours ago
Paroksh it has begun.... View
Scott Humphries - 2 days ago
"Braddon of the south" . So the light industry and commercial businesses will eventually be pushed out by apartments, just as... View
News 14

Jim Jim - 24 hours ago
Balanced journalism Ian, neither political party are doing that fantastic a job and deserve your devotion. Be critical of bot... View
News 7

Jess Peil - 1 day ago
This is so exciting! View
Roland De Saxe - 1 day ago
Great idea for Eden area View
Talla Mc Bogan - 2 days ago
happened in the otways ,, mountain bikes took the moto tracks ,, they only use a small area though ,, so plenty of moto track... View
Opinion 32

@The_RiotACT @The_RiotACT
From the reggae-infused sound of CBR trio Kopasetic through to the raucous punk rock of The Dirty Sunflowers, this week’s #GigGuide has something for everyone https://t.co/rHIqQWMMVn (6 hours ago)

@The_RiotACT @The_RiotACT
There’s a new food van on the block in Belconnen and it packs a ton of nostalgia & amazing Sri Lankan flavours https://t.co/aOH5vJ6z8f (8 hours ago)

@The_RiotACT @The_RiotACT
Canberrans can look forward to some events going ahead over the spring and summer but a cloud remains over multi-day festivals such as Summernats and big public celebrations unless the current crowd rules change https://t.co/VO9eYdqVGg (10 hours ago)