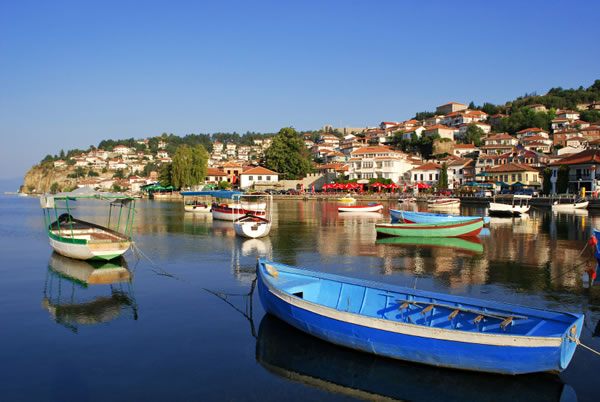 Queanbeyan could soon have a new sister city in the form of the lakeside Macedonian town of Ohrid, according to an article in the Queanbeyan Age.

Mayor Tim Overall and local Councillor Vic Trajanoski will travel to Ohrid in July on behalf of Queanbyan City Council to sign a ‘Friendship Agreement’ with Ohrid’s mayor, Nikola Bakraceski.

Major Overall and Councillor Trajanoski will cover the cost of their own airfares to attend the official signing, with Council set to pay their accommodation costs.

A Council spokesperson said Macedonians were the third largest ethnic group in Queanbeyan, with over 500 people living in Queanbeyan born in Macedonia.

Mayor Overall originally proposed a sister city agreement with the city of Ohrid in 2009 during the Ilinden Day celebrations at Queanbeyan’s Macedonian Hall.

Queanbeyan has had a long standing association with Minami Alps in Japan for over 20 years, making Ohrid its second sister city.

Well Beijing are giving Canberra a chinese garden…. I think its also got a small tourism flowon effect and the relationships foster other opportunities.

Can anyone please explain to me what the point of sister cities is ? Other than tax-payer subsidised travel for pollies, that is.

Good call, Henry Wadsworth Longfellow: “When it was bad, it was Ohrid” …

Yes the article does say that they are paying their own airfare which will probably be written off at tax time as a business expense.
Who is going to pay for their entourage?

What makes you think they will have their tax assessed differently than the rest of us? I certainly claim expenses incurred at tax time, don’t you?
Further, where in the article is the “entourage” mentioned.
Mountains out of molehills…

Yes the article does say that they are paying their own airfare which will probably be written off at tax time as a business expense.
Who is going to pay for their entourage?

Does or does not the article say that they are paying their own air fares?

Yes the councillor’s are paying the airfares however the council are paying for their accommodation and presumably travelling allowance. No mention of how long they were staying in Ohrid.

Does or does not the article say that they are paying their own air fares?

HiddenDragon - 48 minutes ago
An overly literal (or, perhaps selectively so) approach to the application of the criteria for different speed zones might ha... View
David Brown - 3 hours ago
Clinton Berry I don’t know of any accidents in the last decade. View
David Brown - 3 hours ago
Toni Isaacson It simply adds more proof to the fact that road fines are simply an easy tax. Highway Patrolmen are tax collect... View
Lifestyle 1

Kathy Schneider - 1 hour ago
One of the highlights of the year! View
Sport 8

Phil Small - 1 hour ago
One of the best and nicest guys ever.....cheering you on GT. View
Cheryl Thuillier - 3 hours ago
Give me a message. I can help. Eat cucumber skin every day. Message me. I can tell you a story that save a friend's life. View
Marcia Bowden - 4 hours ago
Glen, sending positive thoughts x... View
Community 19

Robert Hawes - 5 hours ago
Robert Knight Agreed. It would be hard to make a good bus route though the suburb as it is isolated. Would be better if they... View
Robert Knight - 8 hours ago
You cannot plonk in a greenfield suburb, built all at once, with no dedicated public transport corridors, an inbuilt car depe... View
News 16

Jenny McInnes - 5 hours ago
Angelo Turcin Dr Encrico Taglietti designed the cinema and he won the Australian Arctetects Gold medal in 2007. Clearly you a... View
Trish Roberts - 5 hours ago
Thanks, Andrew! You would certainly know. View
Andrew Pike - 6 hours ago
ANDREI RUBLEV looked great on the giant screen but wasn't the last film. The very last film shown was a reprise of the very f... View
Lifestyle 1

Lynn Stape - 6 hours ago
so great. I was not aware they had a shop. Some really nice things for sale. I love the postcard for Gungahlin with the light... View
Community 41

John Hamilton - 6 hours ago
They have been paid for by rates and other taxes. So they have paid. View
Lynn Stape - 10 hours ago
John Hamilton sigh if you say so..look mate if you want the precious cyclists to be hated more then by all means make all the... View
What's On 7

It seems too many Canberra motorists are still rushing to meet police, with speeding offences bringing them to highway patrol...
Property 156

The superb green 16.18 hectares of pasture at LouieLou at 57 Vaughan Drive in Sutton, the residence, cottage and facilities, are possibly the...
News 33

@The_RiotACT @The_RiotACT
In this week’s newsletter we’re talking COVID, car crashes, Canberra’s newest suburb + one of the finest properties you ever will see https://t.co/utq8zjI7Mq (12 minutes ago)

@The_RiotACT @The_RiotACT
In a year of endless disasters, cartoonists say 2020 has been a Dog's Breakfast. MoAD's Behind the Lines exhibition makes sense of it all https://t.co/Fb1EbHEs4B (1 hour ago)

@The_RiotACT @The_RiotACT
ANU researchers have returned from a four-week mission to Macquarie Island to learn more about Earth’s most violent underwater earthquakes https://t.co/zaEAeAj9kH (3 hours ago)