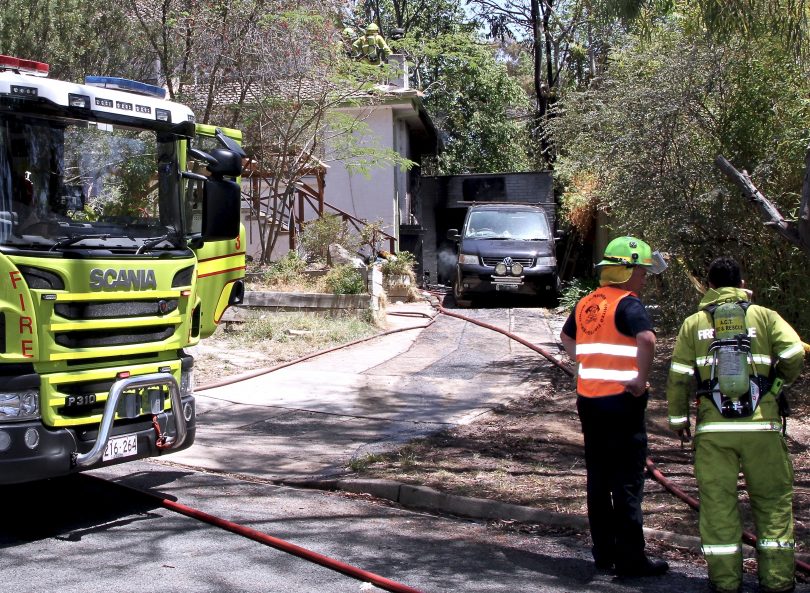 Firefighters from ACT Fire and Rescue remain on scene at a house fire in Curtin. Photo: Michael Weaver, Region Media.

Quick thinking by nearby tradesmen in the suburb of Curtin has helped save a house and its sole occupant when a fire quickly ignited there today (20 November).

ACT Fire and Rescue responded at 11:24 am to a call of a car alight in McCormack Street in Curtin. That call soon escalated to a car, a boat, shed and house fire, prompting numerous calls to triple zero.

ACT Fire and Rescue commander Matthew Mavity said their first crews arrived at 11:33 am to find the car, boat, shed and house all alight after neighbours and nearby tradesmen reported hearing a loud explosion.

Commander Mavity told Region Media a young man was inside the house having a shower at the time of the fire. The man was alerted to the fire when local tradespeople in the area climbed through a window. All safely self-evacuated from the house as fire crews arrived.

Three ACT Fire and Rescue crews and ACT Policing remained on the scene to conduct investigations and ensure the surrounding area was safe.

“The crews did really well,” Commander Mavity said. “They got on top of the fire quickly and made sure that lives and property were protected.” 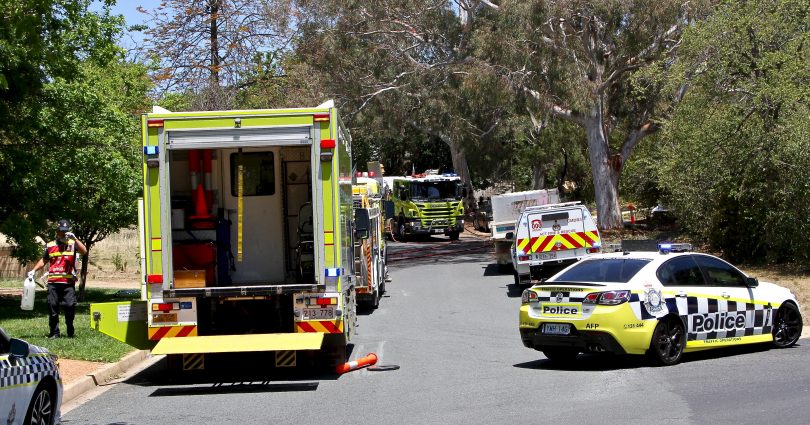 The scene from a house fire in Curtin. Photo: Michael Weaver, Region Media

The cause of the fire will be investigated, although it is not being treated as suspicious.

Commander Mavity said the fire appears to have started beside a boat stored at the side of the two-storey house; however, investigations are underway to confirm the source of the fire.

While there was extensive damage to the shed and boat, firefighters prevented the fire from spreading from the sub-floor into the walls and roof of the house.

The ACT Emergency Services Agency reminds the community to be mindful that dry conditions mean fires can start and spread quickly.

Commander Mavity said people should be conscious of items around their homes that could ignite in a fire, especially with a severe fire danger rating ahead of a forecast top temperature tomorrow of 39 degrees and strong westerly winds.

“We ask our people in Canberra to be really conscious of anything that may cause fire and to call triple zero before you start filming,” he said.

“We’ve got a few really bad days ahead of us and we’d like the cooperation of the public to keep on top of possible emergencies.

“With this fire, we definitely had concerns around items in the garage where flammable items such as paints and fuels were stored.”