Foxsports brings word of the Canberra Raiders continuing the crapful recent record of Canberra sport with an extra time golden point loss to the Gold Coast Titans at home:

The home side looked to have won the match when forward Dane Tilse crashed over 13 minutes from the end but a Matt Orford blunder from a scrum feed gave the Titans one last chance and Laffranchi obliged next to the posts.

Another Canberra mistake – this time from winger Blake Ferguson – put Gold Coast on the attack straight away in extra time and Bird calmly potted over the one-pointer. 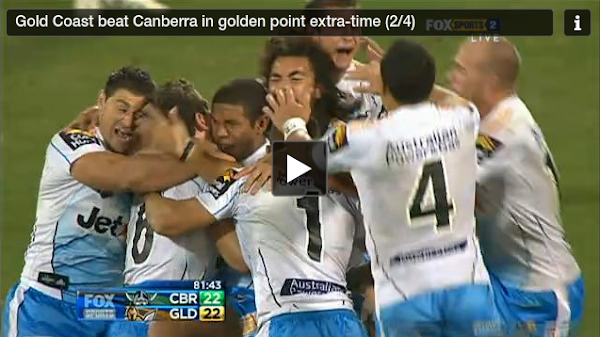 After a shocking day on the punt I had a tenner on Tilse at 41 to 1 to score the last try.

Looks like a couple of weeks up at Logan to find some form is the only option for Ox!!!

When a horse is lame they take it out back and shoot it. I assume the same rules apply to an Ox.

Doesn’t appear to apply to the brumbies. More’s the pity!

Blake Ferguson (apart from the knock on that led to the field goal) was very good though. Great buy.

Ferguson & also Vidot were our best players last night, but they were the only ones.

Forwards made no ground as the backs (Orford) were loading them up flat.

The Titans really pasted Dugan when he was put under the high ball and he was injured as a result. Ferguson stepped into the fullback roll and was exceptional, albeit that last error, but it was Orford across the game that cost us the 2 points not just that brainfart at the end.

I admit I absolutely loath Orford. Regardless of how Williams played in the first round the Raiders have always backed their young stars, and they should now.

We made no ground with the ball and the only times we did were when Orford wasn’t involved in the play. It appeared that whenever he got the ball an all mighty groan and resounding “NO” was emitted by the crowd.

Its time to bite the bullet and take ‘ol yeller out behind the shed and do what needs to be done.

Raiders look like they’ve joined the Brumbies in the race to the bottom of their respective competitions.

I don’t know what the Raiders do in the pre-season but every year they start like slugs.

They were very ordinary overall. Matt Orford has not played well this season and I don’t know why they put him in after the win against the Sharks.

Blake Ferguson (apart from the knock on that led to the field goal) was very good though. Great buy.

why did the Raiders want to kick off 1st in extra time in the first place. Stupid decision right there

that was absurd!
what the hell matt orford was doing knocking on the ball
we have not won a game since he has played and if Mcrone gets dropped instead of orford then Furner should resign as coach. they was pathetic and they never looked like winning just how they havent since their win over the sharks.
We drop so much ball and who is our dummy half? i counted 4 different players turning up to play dummy half.
3 wins to turn it around

Benjamin Kremer - 18 minutes ago
Andrew Wilson that guy with the camry in inner north View
David Brown - 21 minutes ago
Tiffany Roy The way I read the article, it was about aggression generally. View
Amy CJ McFarlane - 37 minutes ago
Have my brand new dash cam set up as of today because my 18 month old vehicle has already been scraped up in a car park and t... View
Property 21

Amanda Sanderson - 42 minutes ago
I’ll give you bottomless gin and tonics Peter Taylor 🤣 View
John Sheil - 54 minutes ago
Well I have known 2 licensees over the years and neither have achieved any success. May need a new business strategy.... View
Breaking 4

HiddenDragon - 56 minutes ago
John Moulis' experience illustrates a serious flaw in the vaccination program. With the "advice" (a rather dishonest way of d... View
Maya123 - 2 hours ago
I should add that my mother also had AstraZeneca, but had no symptoms. So it varies from person to person. View
Maya123 - 2 hours ago
If the doctor vetoed it, that really strange and frustrating for you. I do hope you manage to breakthrough the barriers being... View
News 19

Irene Kelly - 2 hours ago
What happened? View
Tim Van Der Vlist - 6 hours ago
No discounts for the members for resigning is a disgrace. They have to play on a mediocre (at best) course for 6 months and s... View
Property 32

Capital Retro - 5 hours ago
It was announced in May 2015 that The University of Canberra will be allowed a supermarket, shops and commercial office space... View
Lifestyle 4

Lyn Bailey - 5 hours ago
The story about the ghost walking along the Hume Highway near Lake George is true. I will remember this story for as long as... View
show more show less
*Results are based on activity within last 7 days

The Canberra Southern Cross Yacht Club in Yarralumla is about to set sail on a redevelopment of its lakeside hospitality...
Opinion 139

Motorists involved in collisions with vulnerable road users may face a specific charge and much stiffer penalties if convicted under...
Opinion 139

@The_RiotACT @The_RiotACT
A new Auditor-General report has found teacher performance could not be adequately assessed as performance management has not been "implemented effectively" https://t.co/eyqWf1Q0IN (1 hour ago)

@The_RiotACT @The_RiotACT
Forrest Tennis Club is one of just three institutions that the Federal Government says has failed to comply with its 'moral obligations' to sign up to the National Redress Scheme https://t.co/71I4Ex10Bk (4 hours ago)