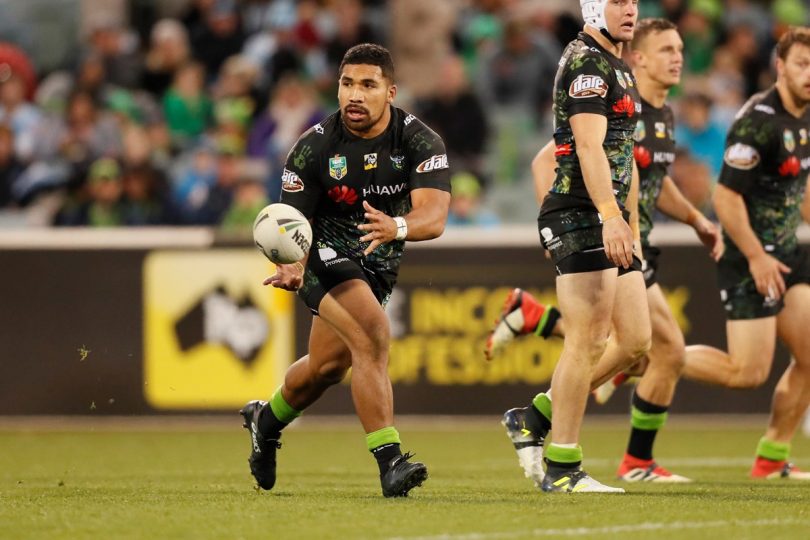 Siliva Havili is using every game as a learning process. Photo: Supplied by Canberra Raiders.

Canberra hooker Siliva Havili admitted the Raiders are frustrated by their close losses record but remains confident that they are too good a side not to turn it around.

Havili said the Raiders’ loss to the Dragons on Sunday afternoon was bitterly disappointing and was not up to scratch, but their belief and confidence in each other have not wavered.

He believes the Green Machine have learned their lesson and are ready to tackle Manly on Friday night (25 May) at GIO Stadium.

“We take the close losses pretty personally because it has been a thing that has happened over the recent weeks,” Havili said.

“Knowing the capabilities of our team and the ability of what we can do is the frustrating part of not coming away with a win from these games we should be winning.

“That’s the frustrating part of it, knowing that we do have the ability to put points on a good defensive side.

“There is an inconsistency we see in ourselves playing good and then playing bad and just lapses in the game where we play good footy and other times we give up the ball more than we should.”

The young hooker moved to Canberra this year after impressing with his performances for Tonga in the Rugby League World Cup and with just 35 NRL matches under his belt, he is using every game as a learning process.

“Heading into this game, it is definitely a learning process from last week’s game, especially playing the competition’s leaders who are the benchmark.

“For us to score that many points against them gives us a bit of confidence.”

The 25-year-old believed that tidying up the defence was an integral part to fix if they are to walk away from Friday night’s game against the Sea Eagles with the two points.

“Defensively we were a bit loose in the middle, and I am to blame as well,” Havili said.

“Hopefully we can come out better this week and a lot more focused and concentrated and ready for Friday.”

chewy14 - 14 minutes ago
"A responsible and competent government would" Well there's your first problem. They haven't been forthcoming with robust bus... View
michael quirk - 2 hours ago
The government has yet to provide evidence to justify the light rail extension, the viability of which is tenuous given incre... View
News 115

Jay Annabel - 26 minutes ago
Ajay Cee ...... a drastically reduced number in 2020 because of covid lockdowns. View
Ajay Cee - 2 hours ago
Jay Annabel 36 in 2020. View
chewy14 - 2 hours ago
JC, Seeing as I've been the one quoting directly from the national plan, your memory seems a bit fuzzy. And I'm still waiting... View
News 1

Capital Retro - 34 minutes ago
The next step is to equip the ravens with lasers. Death to all drones!... View
Community 6

It looks like next year's federal election will be even more about keeping Australia safe. The Morrison Government will seek...
Best of Canberra 51

@The_RiotACT @The_RiotACT
A plastic surgery clinic and medical centres are among new exposure sites, and Calvary has confirmed a fully vaccinated aged-care staff member has tested positive https://t.co/RE8RHLqgTF (8 minutes ago)

@The_RiotACT @The_RiotACT
A new @ACOSS survey has revealed 85 per cent of income support recipients cannot access COVID-19 #Disaster Payments and are struggling to survive, including up to 20,000 #Canberrans https://t.co/0w2XlrG1qc (49 minutes ago)