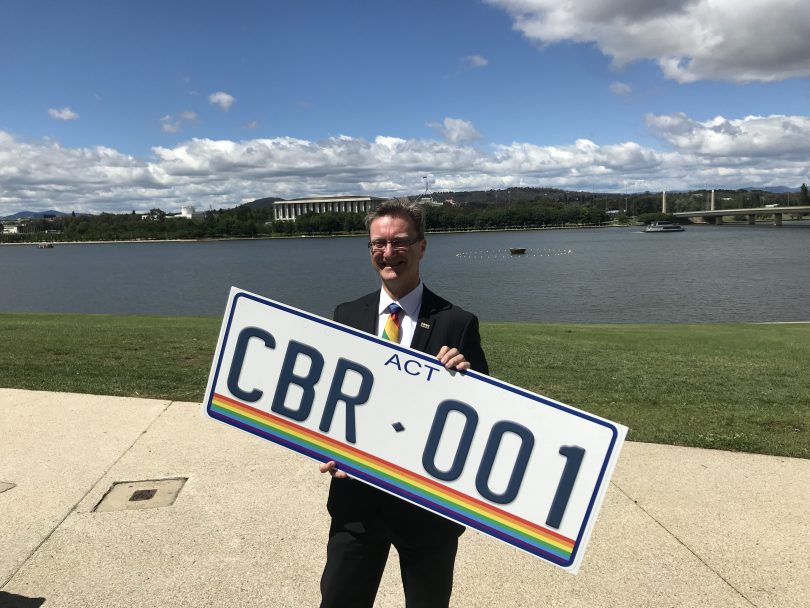 The historic legalisation of same-sex marriage in Australia, led by the ACT which recorded the highest Yes vote in the country for the postal survey, can now be celebrated with the availability of rainbow licence plates for the Territory’s drivers.

The new number plates, now available to order from Access Canberra, feature a rainbow strip along the bottom and are a way for people to show their continued support of equality.

Canberrans demonstrated how inclusive they are in the same sex marriage survey, recording the highest ‘YES’ vote of any jurisdiction, which led to the historic passing of the Marriage Amendment (Definition and Religious Freedoms) Bill 2017 in the House of Representatives on Thursday.

Minister for Regulatory Services Gordon Ramsay said that Canberrans could purchase a set of the new rainbow number plates for $60, with orders now being taken through Access Canberra.

“This initiative is cost neutral, with those choosing to purchase the plates paying the full cost of their production,” he said.

“We expect these plates will be of high interest in our community with Canberrans looking for ways to support and celebrate equality. They are also bright and colourful and are sure to attract attention both locally and interstate.”

Mr Ramsay also announced that Access Canberra would be waiving the first certificate fee for those couples married previously under the ACT’s Marriage Equality (Same Sex) Act 2013 as well as those who have previously registered a civil union under the Civil Union Act 2012.

“This will support around 80 couples and we are pleased that this is another way we can acknowledge this important change,” he said.

Number plates can be ordered at any Access Canberra Service Centre. For more information about the plates, or eligibility for a waiver of certificate of registration fees visit www.act.gov.au/accessCBR or call 13 22 81.

Why are they so big?