An artist’s impression of the intersection of London Circuit and Commonwealth Avenue on the light rail Stage 2A route to Commonwealth Park. Image: ACT Government.

The full extent of the project to raise London Circuit as a precursor to extending light rail to Commonwealth Park is now open to scrutiny with plans lodged with the National Capital Authority now open for public consultation.

The ACT Government said this is an important milestone in its long-term plans to take light rail to Woden, the first leg of which is the 1.7km extension from Alinga Street to Commonwealth Park along London Circuit and Commonwealth Avenue.

“The project will transform the southern end of the CBD from an untraversable road interchange, into people-oriented streets for pedestrians, cyclists and public transport,” said ACT Minister for Transport Chris Steel.

Three works approvals covering the London Circuit project and an environmental assessment are now available to examine during the next month or so.

A consultation report and decision is not likely until February 2022, with construction expected to start in April and last for two years.

Instead of the current underpass, London Circuit will be reconstructed using 60,000 cubic metres of fill on either side of Commonwealth Avenue, lifting the road six metres to form a four-way intersection with traffic lights, and with sufficient space to accommodate light rail.

London Circuit, between Commonwealth Avenue and Constitution Avenue, will also be rebuilt to accommodate potential future expansion of the light rail network. 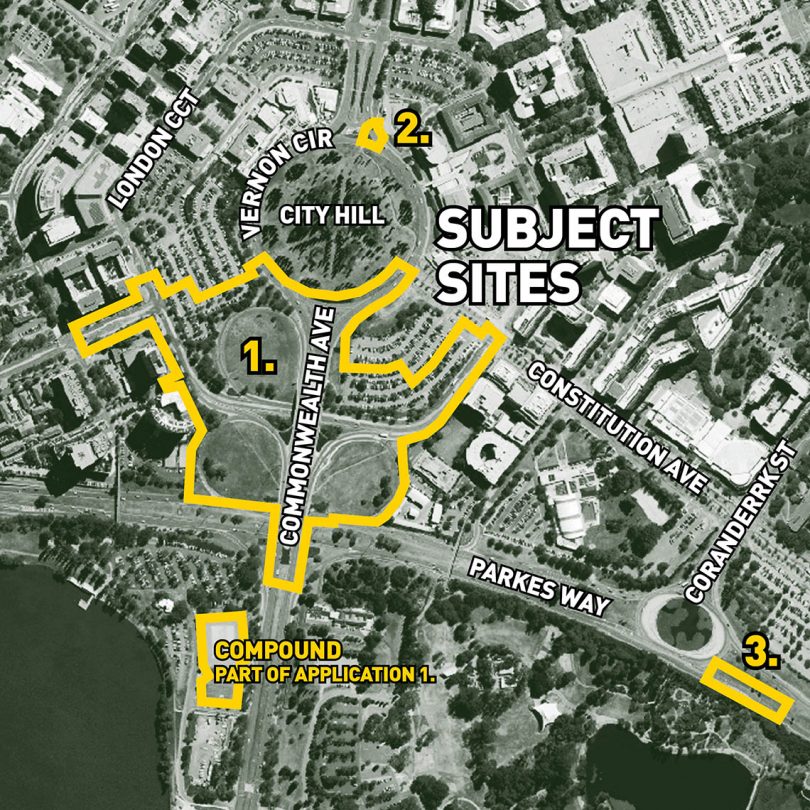 A overlay map of the proposed works in the ‘Raising London Circuit’ project. Image: ACT Government.

There will be temporary works on Vernon Circle to widen the existing northern road loop around City Hill, between London Circuit and City Hill, and create a dedicated bus lane and separate vehicle lane. New traffic lights will enable northbound vehicles to safely turn right into City East.

The environmental assessment says there would be minor to moderate increases to traffic congestion, delays and travel times, while buses could experience moderate to major travel time increases due to increased congestion on London Circuit and lower speed limits along Commonwealth Avenue.

It says two northbound lanes and two southbound lanes could be maintained on Commonwealth Avenue, as well as footpaths and on-road cycle paths, but a worst-case construction scenario that includes the loss of a northbound lane has been modelled and assessed.

The ACT Government says Canberrans will face four years of traffic disruption during the course of the light rail Stage 2A project.

The main biodiversity impact is on the endangered golden sun moth (Synemon plana) and mitigation plans have been approved under the Environment Protection and Biodiversity Conservation Act 1999.

About 100 mature trees will need to be cleared, however post-construction more than 130 trees will be planted.

Early preparatory works for raising London Circuit are already underway, including moving underground utilities from their current position along London Circuit to a new alignment on Constitution Avenue, Vernon Circle and Edinburgh Avenue.

Subject to approvals, construction would commence around April 2022 and take about two years to complete.

The National Capital Authority said the consultation report and decision would likely take until February 2022.

To view the plans and comment, visit the National Capital Authority. Consultation closes on 10 December, 2021.

The clover leaf access to Commonwealth Ave was built when the population of Canberra and private cars increased. No doubt the required bridges cost a lot of taxpayers’ money, but the layout provides a well-thought-out solution to getting cars on and off this arterial road without stopping the flow of traffic. Now the government takes it upon itself destroying this set-up, claiming they want to provide a connection between Civic and the West Basin for pedestrians. How kind! They seem to be ignorant of the fact that one exists already in form of a bridge for pedestrians and bicycles crossing Parkes Way. And while the rest of the world is desperate to reduce C02 emissions, this government will happily proceed trucking some 60.000 cubic meters of soil into Civic to return the area to what it was when there were few people and few cars in Canberra. What a price we have to pay for going backwards. A minimum of 4 years of traffic chaos will reduce customers coming to Civic to shop and dine even further after the long lockdown and working from home has already inflicted much damage on businesses. One must start to wonder why Greens and Labor are enacting a policy very different from what the electorate expects from them, neither protecting the environment nor those workers at the lower end of the income scale.

Just maybe the ACT Government should thoroughly investigate the wheel cracking that has occured in the same model of light rail in Sydney and overseas that we have, before spending any more of our money on Stage 2a!

It’s a global problem and some of those Sydney trams were second hand:

Such a waste of money and resources. Light rail will never go to Woden because it cannot be justified. That’s why the business case had still not been released after it was promised four years ago!
The Government knows that, hence the building up of London Circuit to Constitution Avenue so it can be extended to Russell. What an incompetent and irresponsible bunch of clowns Barr and Rattenbury are. And how useless are the Liberal opposition. Canberra deserves much better.

They are raising it 6 metres: Constitution and London Circuit are the same level, it’s not going to Russell.
If there was a plan to take it to Russell instead, they wouldn’t be doing infrustructure work at Woden.

Read the story properly and then comment kenbehrens. They’re having a bet each way.

Perhaps Barr can talk to his sensible mates down in Melbourne and see what real modern public transport projects look like, rather than extending a tram system that is already obsolete and has absolutely no viable business case. The irrationality of this tram fiasco is made even clearer by all this unnecessary proposed road works that like the tram itself will ultimately slow traffic down and result in more inconvenience and inefficiency for both public and private transport users.

Melbourne seems to at least be thinking about the future, not relying on trams which are yesterday’s very expensive and inefficient technology today.

“Similar to an electric bus, the Trackless Rapid Transport (TRT) proposal rely on battery-powered vehicles with rubber wheels that run on asphalt and do not need tram tracks or overhead lines.”

Wouldn’t it be funny if the whole light rail project had to be scraped because of impact is on the endangered golden sun moth (Synemon plana).

The trams using the light rail don’t travel fast enough to damage any insects so that problem is solved.

Spoken by someone who has never traveled on one there capital retro. The line to Gungahlin moves along quite well. Only thing that slows it are those pesky stops.

I have no reason to travel on a speed limited 70kmh tram in Canberra and you probably have never travelled on a bus along Adelaide Avenue where the speed limit is 80kmh but buses usually do 90kmh in the T2 transit lane.

The only thing that will slow the existing buses between Woden and the City are those pesky trams.

I’m willing to bet I’ve been on a bus on Adelaide Ave more than you too.

But let’s be clear the only reason the trip Woden to the City will be slower is because the lightrail will stop more and go via the parl triangle thus servicing more people.

The actual mode itself isn’t slower to the point of making any difference. And in the case of Gungahlin the tram is faster than the bus. Peak hour bus times on the same route with the same number of stops was 45 minutes on bus, 25 on tram. Off peak bus was 25.

Same with Gungahlin/Belconnen/Tuggers there should be express peak hour only buses to the city.

Correct me if something has since changed, but my understanding is that the option of taking light rail via the Parliamentary Triangle has been scraped, because the Triangle falls under planning controls of the Commonwealth, not the ACT Government.

Buses will still remain, but only as a replacement service, in case a failure in the light rail service.

JC,
That is just factually incorrect. Stop attempting to spin.

Whilst one of the reasons why the light rail will be slower on Stage 2 is because of the additional stops, the light rail vehicles themselves are also not capable of the same speeds as the current buses.

Not by a little bit as you claim either.

So, the trams will still never exceed 70kmh?

We can therefore agree that the sun moths are safe.

Chewy/Capital top speed is not the only factor. But even if it were the only part where the bus can get to 80km/h is along Adelaide Ave where the bus is about 90 seconds faster. That is fact not spin

But that 90 seconds would be gained by a more direct route from Woden interchange to Adelaide Ave and by traffic light priority.

I stand by my comment the reason the tram journey will be slower is because it will stop more and goes via the parl triangle. The mode itself is not the issue. The route is.

An Kenberrans there is no way to a valid the NCA’s controlled land. The route through the parl trainable is along state ave, whereas ACT gov originally wanted to go along the strip in front of DFAT, behind PM&C and on Queen Vic terrace behind old Parl house. The NCA objected as it wasn’t an inter town route in their plan so the change was made to state circle instead.

The Tram would be faster if it didn’t have to make stops to pick up and drop off passengers.

I would have been Don Bradman if I just stopped getting out. .

I look forward to writing objections on various grounds, and having those objections “considered”, meaning “ignored because this process is a formality in a foregone conclusion”.

Who would have thought that would be needed to cross the lake using a fixed track transport?

Vander Leal raising gets rid of some/all of the loop ramps thus freeing up land for use. Whether one agrees with the land use or not is another issue, but from a planning perspective it means the roads aren’t enclosing patches of grass that can’t be used.

Vander Leal patches of grass do not need to be used