Rape survivor awarded $420,000 after John XXIII College failed in its duty of care 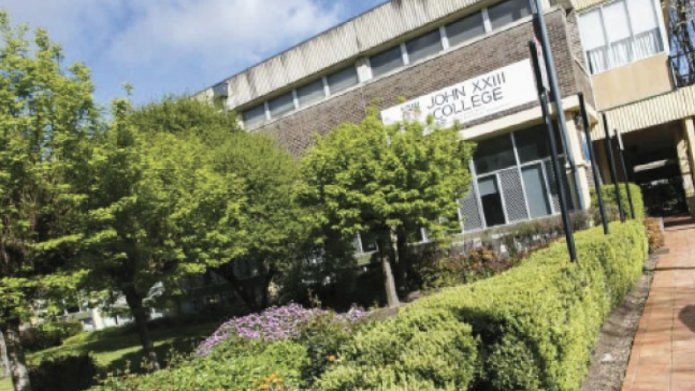 Justice Elkaim found the College wanted to guard “its reputation as a hard-drinking, good living establishment as a badge of honour”. Photo: ANU.

A former student has been awarded $420,000 after the ACT Supreme Court found that the ANU-affiliated John XXIII College failed in its duty of care when she was raped in an alleyway during a college bar-hopping ritual in 2015.

Justice Michael Elkaim found that the college had failed its duty of care after kicking the intoxicated students off-campus when the woman was “foreseeably vulnerable”.

Students were already heavily intoxicated and vomiting before 9:00 pm before they proceeded to play “pub-golf”, where a certain amount of drinks need to be consumed at each venue to make “par”.

The woman woke up in her own bed the next morning with no memory of the night. The Court heard she only found out about the intercourse more than a week later when students were joking about the incident.

“The [woman] did not consent to this activity; in fact, she was so intoxicated she has no memory of the event,” Justice Elkaim said in his judgement.

“I do not think that the [College] can be held responsible for allowing the Pub Golf event to proceed, but I do think [Johns] breached its duty of care in directing the students to leave its premises and in the manner in which it dealt with the complaint.”

Justice Elkaim also found that the College was “well aware of the appalling conduct that characterised the Pub Golf event” but wanted to guard “its reputation as a hard-drinking, good living establishment as a badge of honour and a lure to students who thought these attributes were requirements of their introduction to adulthood and university life”.

Justice Elkaim found the College “breached its duty of care in directing the students to leave its premises and in the manner in which it dealt with the complaint”. Photo: File.

Comments made by Head of College Geoff Johnston when the woman reported the incident were described as “entirely inappropriate” and “a massive departure from the pastoral duty of care that [he] had assumed”.

Mr Johnston made comments including “sometimes when boys are drunk they can be quite arrogant but are often underperformers; I’m not even sure that anything did happen in the alleyway; and another concern is how you managed to get that drunk”.

“Of all the comments he made, perhaps the only one that was appropriate was a suggestion of counselling,” Justice Elkaim said.

Despite lawyers for the College arguing that “if the law is that if you are intoxicated and you have sex, you cannot consent, then neither of them consented”, Justice Elkaim still found there to be contributory negligence.

“This is not a case between the plaintiff and [the male student] in which their relative states of intoxication are to be compared,” he said.

“The negligence that I have found in respect of the direction to leave the College occurred when the plaintiff was already intoxicated. In other words, she took no deliberate steps to place herself in a position of vulnerability.”

He also stated that “the evidence does not support a conclusion that [the male student] was so intoxicated that he had not acted voluntarily”.

A full summary of the judgement can be found here.

Tina Edwards - 22 minutes ago
They only upgraded it a year or so ago!!🤔 View
News 19