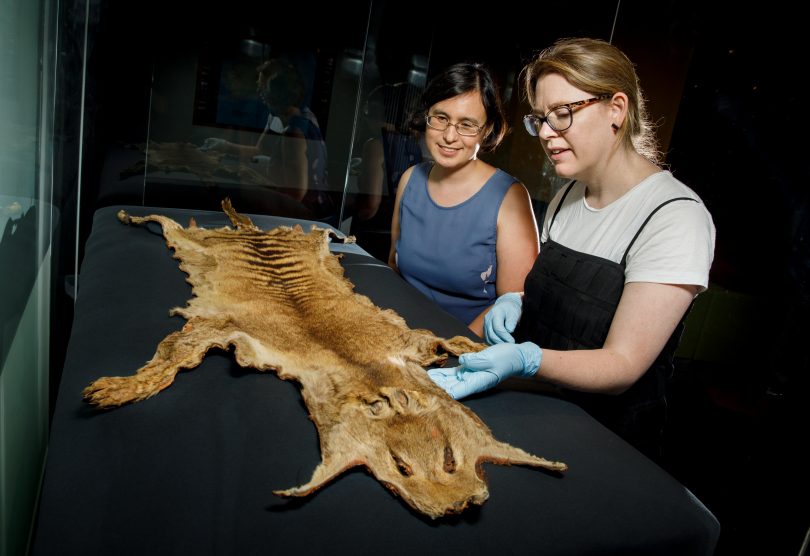 Visitors to the National Museum of Australia can now view a newly acquired rare skin of the extinct Tasmanian tiger or thylacine.

The Museum acquired the thylacine pelt, one of the best preserved in known existence, late last year after it spent nearly 100 years hidden away in New Zealand. It went on public display on Thursday (14 February).

It says the almost-complete pelt features rarely preserved details such as a nose, tail and the bones, tissue and ligaments of the paws, and is in remarkable condition after spending most of its life in a drawer at its collector’s home.

“After an extensive evaluation process, the skin was purchased by the National Museum of Australia in late 2018 for $250,000 which included a generous contribution from the National Cultural
Heritage Account of $125,000,” said Ms Bull.

Head Curator Dr Martha Sear said the pelt had been added to the National Historical Collection to better represent Australia’s unique fauna and the environmental impact of species loss.

“The pelt is considered to be one of the best preserved specimens in existence, and one of the few remaining physical specimens of a species that has become a symbol of extinction,” Dr Sear said.

NMA Curator Karen Schamberger said the female thylacine was probably a young adult when she died and the flaps of skin near her hindquarters were thought to be the remnants of a pouch.

“The fur is soft and the colour is strong, not faded. The pelt is almost complete, with foot bones and associated tissue. These will likely provide potential for osteological and genomic analysis as well as providing potential information for aspects of thylacine natural history such as behaviour, hunting and extinction,” she said.

Originally acquired by an avid fauna collector, Archibald Robertson, in 1923, the pelt was passed down to his only daughter, Janet Withers upon his death in 1970. It came to the attention of experts in 2017 while on display in a New Zealand taxidermist and canoe hire business.

Early settlers to Tasmania believed thylacines preyed on livestock. The Tasmanian government instituted a bounty of one pound per thylacine caught in 1888. The introduction of competitive species such as wild dogs, the fur and wild animal trades, foreign diseases including mange, and extensive habitat destruction also greatly contributed to thylacine population losses.

The last known thylacine died on 7 September 1936 at Beaumaris Zoo in Hobart. Thylacines were officially declared extinct by the International Union for Conservation of Nature in 1982 and by the state government of Tasmania in 1986.

Since then, thylacines have become a symbol of modern extinction, and 7 September has become known as National Threatened Species Day.

The rare thylacine pelt has been installed in the upper Landmarks gallery and will be on display to the public until mid-May.

bj_ACT - 58 minutes ago
Not sure about the adding 10 minutes to the 333 journey by changing to go past College St and UC. The change Only added 1.2km... View
michael quirk - 5 hours ago
Yes,but it is by no means certain that light rail stimulates urban redevelopment more than BRT. Much depends on design of the... View
michael quirk - 10 hours ago
If the light rail extension to Woden is such a great project, the government should have no issues with providing justificati... View
News 3

Stephen Saunders - 3 hours ago
Thanks, I wasn't aware of this. Those who care about the Eurobodalla bush should log in to the disgraceful "Dalmeny Land Rele... View
News 158

Cary Elliot Johnson - 4 hours ago
I'm confused as to why the grass cutters are now only doing a half R'sd job and leaving kurbsides and big chunks around obsta... View
Rien Wiersma - 8 hours ago
Troy Dare yes, you’re right, I was just being naughty,... View
Kiri Robbie - 10 hours ago
Chris Montgomery we understand they need to plan, that’s a given. What we don’t understand is why they can’t plan! weat... View
News 7

rocca66 - 4 hours ago
I was staggered to think there could be 30,000 public service compensation claims. View
News 15

jwinston - 7 hours ago
Glad you asked JD. Allegedly Aboriginal and Torres Strait Islander people are incarcerated at higher rates than others. The i... View
Spiral - 18 hours ago
And a lot of these “Deaths in Custody” are not really deaths in custody. They are deaths because the offender is not in c... View
Public Sector 47

Jimmy J LaRue - 8 hours ago
There used to be a technical stream in the Commonwealth. Like there are pay grades for Legal and some other specialty streams... View
JS9 - 8 hours ago
Outsourcing makes genuine sense when it is specialist skills that are not reasonable to maintain within a public service. Whe... View
Jacqui Brown - 8 hours ago
Brian Tait after the last 8yrs I am sure that APS personnel and ultimately the public will be pleased that the former APS mod... View
News 58

JS9 - 8 hours ago
All this highlights again is a) How ridiculously stupid the retail electricity approach in Australia is in general (basically... View
JS9 - 8 hours ago
Shame you don't really understand the electricity network at all then, because you'd quickly understand that what the custome... View
kenbehrens - 20 hours ago
Pretty weird to assign tariffs around whether the house faces north, its size and whether the person is on welfare or not. Th... View
Community 3

Acton - 17 hours ago
"Mr Barr ... said it was more important to be calm for now. " Yes, particularl;y State premiers and their Chief Medical Nanni... View
show more show less
*Results are based on activity within last 7 days

Does your puppy or rescue dog need help settling into their new life with your family? Has a recent injury...
Public Sector 30

@the_riotact @The_RiotACT
The spotlight is fixed on young Canberra #entrepreneur Justin Wong from the Aero Group ahead of the Accountants Daily 30 Under 30 Awards to be announced on 3 December https://t.co/yylG31UDNF (57 minutes ago)