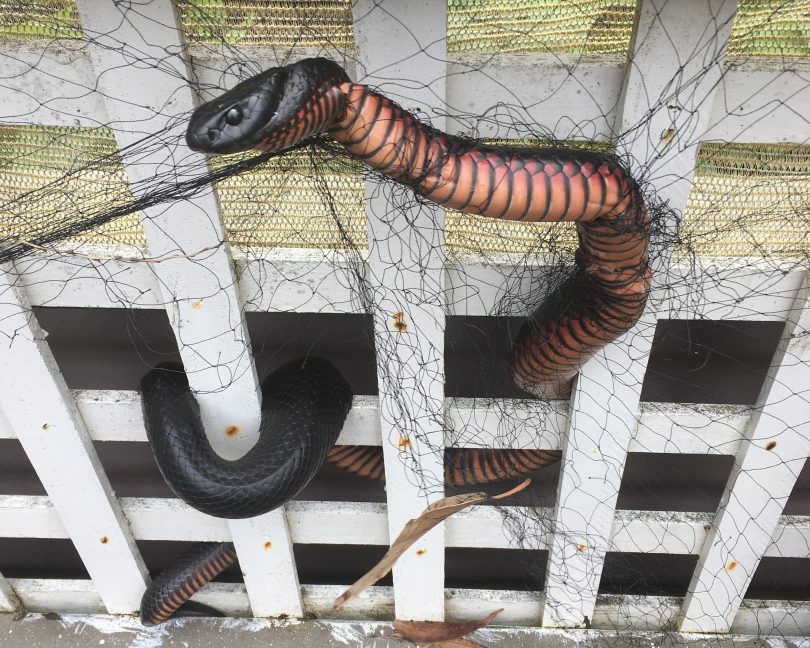 A red-bellied black snake tangled in netting was rescued by WIRES and released into the wild. Photo: Supplied.

A red-bellied black snake caught in netting at Long Beach, near Batemans Bay on the NSW South Coast, has been rescued by a WIRES volunteer and freed into a swampy area away from people.

The snake was entangled in the black netting and had wrapped itself in lattice, which is how experienced WIRES volunteer Kay Mallitt found it when she was called in to free the reptile.

Trained in snake handling, Ms Mallitt would normally bring a second snake handler to free a trapped snake, but there is a shortage of trained handlers so she attended the rescue alone.

She cut the netting from around the snake and then slowly coaxed it to release itself from the latticework so she could put the snake in a bag. 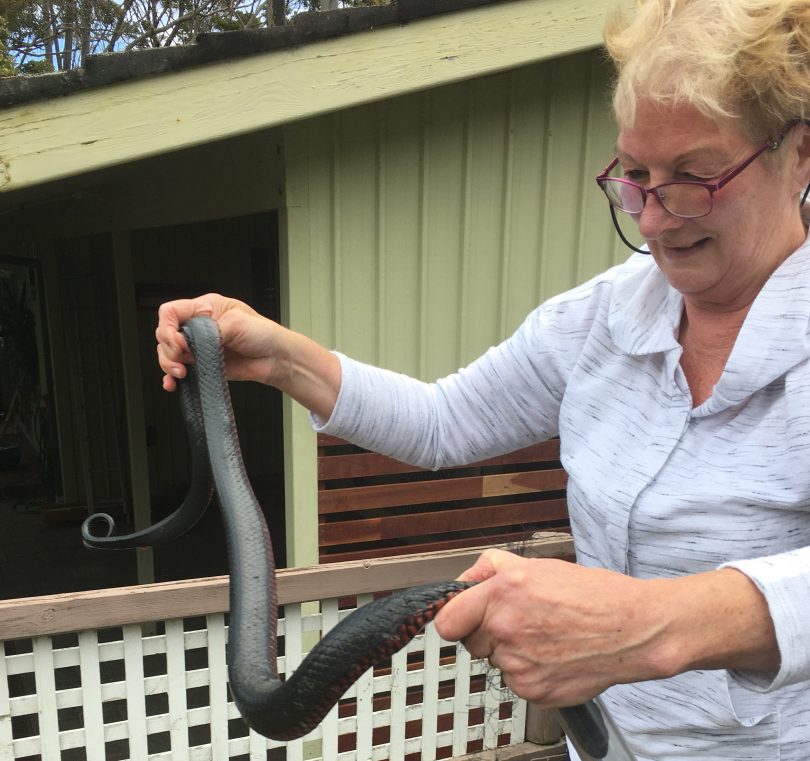 “It’s always a little scary when a venomous snake needs to be pinned by the head,” said Ms Mallitt. “But by remaining calm and focused on the job at hand, Sandy and I were able to safely remove the netting.

“There were no significant injuries to the snake, besides having his pride hurt and wasting venom on the tools that held his mouth open while the netting was removed.”

The snake was released into a swampy area that was teeming with frogs, and far away from people and their gardens.

The rescue serves as a timely reminder for residents to check they are using only wildlife-safe netting over ponds, vegetable patches or fruit trees. Netting mesh should be of a small enough size so a pinkie finger cannot be poked through it.

WIRES advises that people who are not trained to handle snakes should assume all snakes are venomous, and not try to free them without trained help.

Also, snakes are protected by law in all States and Territories of Australia and may not be killed unless they threaten life. They cannot be taken from the wild, kept without a licence or traded without a licence.

READ MORE The best hotels and resorts on the South Coast

If you Google “Outdoor Nylon Snake Trap Net Hunting Protection Family 20×0.5 Meter” you will gets details of this purpose-made net.

Ever since Henry Lawson wrote “The Drover’s Wife” snakes have been trying to get into places they shouldn’t be. I know, someone will now say it’s their right to go where we invaded their territory blah blah, etc. but if you have pets or even children you can’t take the risk.

How caught snakes are dealt with is another matter.

What a lovely pro-wildlife story! Great job…unlike that other post on this forum about a group who encourage and nourish wildlife killing feral pests in Canberra.

Denise McKay watch out when walking down there!

Marcelline Stonehouse We have had a family of them around for years. I have only seen one of them once. They are pretty timid.