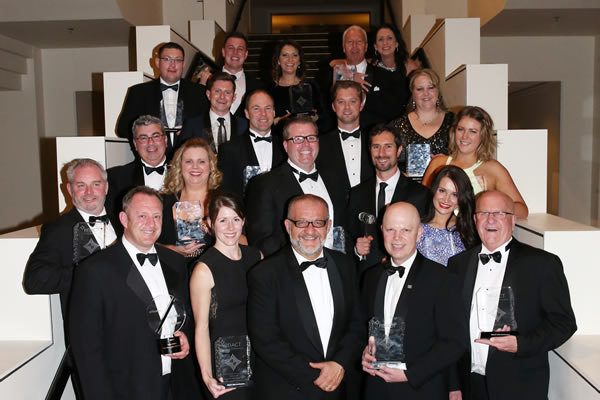 The REIACT Awards for Excellence are one of the biggest events on the ACT real estate calendar, and this year – as in previous years – it was Independent Property Group’s night to shine.

Hosted by ABC 666 presenter Phillip Clarke at the Hyatt Hotel on Saturday evening, Independent Property Group took out several of the night’s most prestigious awards, including Large Agency of the Year, Residential Salesperson of the Year (Jonathon Charles) and Auctioneer of the Year (Mark Larmer).

Luke Evans from LJ Hooker Belconnen proved that he is an emerging auctioneer to watch after beating several strong contenders to win the Novice Auctioneer of the Year category. This tops off a strong 2014 for Evans, who also won this year’s LJ Hooker International Auction Award.

It was great to see some smaller players recognised for their achievements, including Distinct Property Management, which is run by husband and wife team Chris and Brooke Scullin and took out the Innovation Award.

Guests were treated to stunning renditions of Phantom of the Opera classics performed by cast members of the Australian adaptation of the musical. However, by many accounts, attendance was down compared to previous years and at times the evening lacked excitement or a sense of fanfare – a surprise considering that Canberra has much to celebrate when it comes to real estate success.

Congratulations to all finalists and winners. 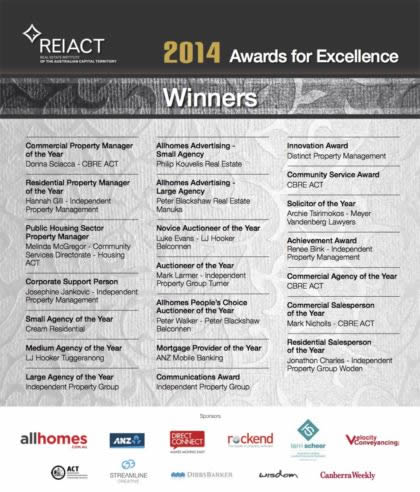 Good to see that warhorse Peter Walker get a gong good for him.

Good to see some new players like Cream and distinct get a gong.

Zoe Lewer - 12 minutes ago
Bob Foster yep. Us humans sure have made an impact. We are the problem. You are right. The day the people who were invaded ch... View
Joy Gosden - 19 minutes ago
Yes. What were they thinking planting them in our suburbs. They drop limbs attract pests and stop grass growing around them.... View
Bob Foster - 37 minutes ago
Another deluded hypocrite post Zoe Lewer 😂 I'm betting you live in a man made structure....made with either cut down trees... View
Opinion 64

Chris Montgomery - 13 minutes ago
Brian Ashcroft they only blow over cause their root system is higher than they should be. Most eucs that blow over are on fro... View
Chris Montgomery - 19 minutes ago
Gertraud Bell All the big Eucalyps were there before all the housing went in. So??? your saying to remove all native trees an... View
Mark Gledhill - 1 hour ago
how long will the eucalypt hate continue? this sounds like treescrimination to me! View
News 45

phydeaux - 35 minutes ago
A few points if I may, starting with your first post in this sub-thread where you start: ".... is literally no good evidence... View
TheSilver - 4 hours ago
Yes, I'm aware there are observational and laboratory studies. I am sceptical of those because it isn't obvious how transfera... View
chewy14 - 12 hours ago
The Silver, I get what you're saying but it has no relevance to my point about the effectiveness of the QR code system for st... View
News 1

Mechanism Of Action - 3 hours ago
Nugget Harris as they should be View
Silentforce - 12 hours ago
Another solution would be to enforce pedestrian laws (if any in the ACT). Working in Civic, each day I witness jay-walking, c... View
Tāmati Kentwell - 13 hours ago
Hugh Gregory most income based schemes like this take into account number of dependents View
Opinion 50

Silentforce - 12 hours ago
Unfortunately most APS departments are short staffed and overworked due to the government shooting itself in the foot with it... View
Opinion 98

Trudy Anais McInnis - 13 hours ago
I hated Triple J in the 90s and I love it now. Thank goodness it’s changed! And millions of votes led to The Wiggles coming... View
Monty Ki - 15 hours ago
Onelia Herriot that's my husband, for sure. View
Onelia Herriot - 17 hours ago
Kathleen Beck the band's choose who they cover. The station has no say. There has even been cases of the same song covered by... View
Food & Wine 20

Jocelyn Martin - 14 hours ago
Unless you can get past our need to make everything look like the inside of Woolworths it will never be like a market in Euro... View
Community 6

Summernats is always divisive, but on the basis of our poll, it looks like more Canberrans are coming around to...
News 45

The art of compromise to find your happy place

@the_riotact @The_RiotACT
The ACT has recorded 620 new cases of #COVID-19 in the 24 hours to 8 pm yesterday. Of those, 61 people are in #hospital, with five in #ICU and one person requiring ventilation https://t.co/yrOFhW3j7d (9 minutes ago)

@the_riotact @The_RiotACT
#Moncrieff residents are pushing for the ACT Government to remove a #smelly and hazardous 'sludge pit' from their backyard. The petition has already attracted more than 400 signatures https://t.co/fW6ONtnb5f (15 minutes ago)

@the_riotact @The_RiotACT
Has your #dog ever become stuck in a toy? A Canberra vet warns it may be more #dangerous than owners realise https://t.co/TJBn419eB7 (1 hour ago)