Remembering Shuttle’s general store, selling everything from a needle to an anchor

The site of Shuttle’s general store on Clinton street in Goulburn. Photo: Supplied.

Shuttle’s included a post office and Commonwealth Bank agency and opened seven days a week from 7 am to 9 pm, selling everything “from a needle to an anchor” as the sign out the front said.

Tom and Pat Bourke arrived in Goulburn from Batlow in 1969. They moved next door to Shuttle’s and leased the shop from the owners who retired to Mollymook on the NSW South Coast. Back then, customers booked up their groceries at the corner shop. Flour and sugar were scooped out of bulk bins, weighed and parcelled up.

Goulburn beekeepers, the Roberts, supplied honey which the Bourkes sold in bulk. Long’s poultry farm supplied eggs. Tom Bourke would hop in his car and run people home with their groceries if they had a big order.

“People on tuckshop would bank at Shuttle’s because they could drive up to the front door,” recalls Pat. “Tom would carry their heavy bags of coins inside. On pension day, pensioners cashed their cheques there.”

Raising their six children and helping in the shop, Pat still found time to smile while helping suppliers. “The Coca-Cola traveller always had a milkshake, and our milkman, Bruce Laybutt, always had a Coke,” she says. 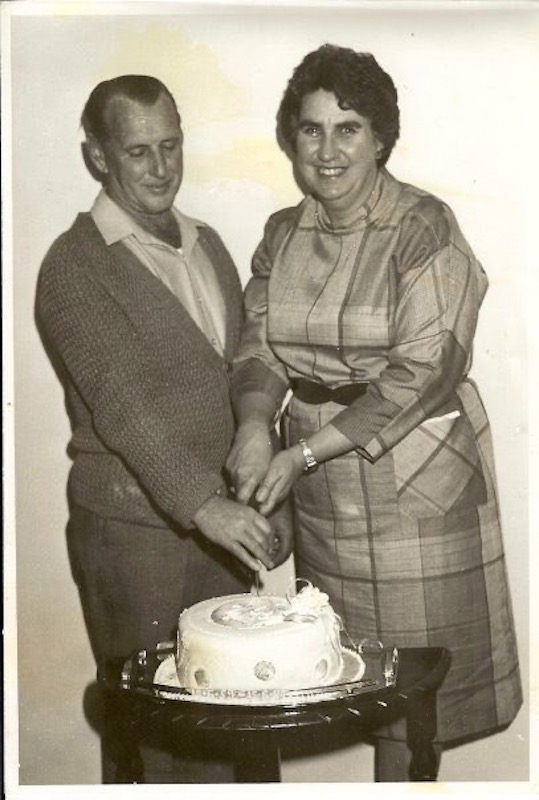 Margaret Staines, May Grant – who lived opposite the shop – Mavis O’Leary, Gail Pudland and Fred Boyd were on staff during the six years the Bourkes leased Shuttle’s.

“Gail was only a young girl; she used to call me mum,” says Pat. “They served customers, stacked storeroom shelves and packed up orders for delivery.”

“A semitrailer failed to take the turn right on the highway, so he tried to go up the Cowper Street hill,” she says. “The truck ended up smashing into the shop, which never reopened. Tom went down and took a lot of stock off his hands because the shop was demolished.”

Margaret Staines remembers a red Rowntree Hoadley van calling in regularly with confectionary. “People would come in for one Vincent’s or one Bex powder,” she says. “You could buy a single cigarette.”

“We also had Cope’s sausages. Bill Cope, a dapper fellow in bow tie, had a butcher shop on the corner of Citizen and George streets, and made the best sausages in town.

“All our suppliers visited regularly, checking on stores and topping them up. Wright Heaton’s were there if you needed anything quickly. Tony Lamarra brought our soft drinks – he had a factory in Coromandel Street. Hope’s Cordials was another supplier. Toparis delivered fruit and veggies.”

Staff filled orders from the Smith Family village on the edge of town, which Tom delivered later. “Tom worked 100 hours a week,” says Pat, fondly remembering her late husband. “Shearing contractors would come in at night and Tom would open up for them after-hours.

“I was in and out like a yo-yo; we got a lady in to cook dinner for us and we would have dinner in shifts. It was a nightmare. We were just so busy; flat out the whole time. We took turns going to Mass on Sundays.”

Then suddenly, it seemed, the Bourkes found prices for goods cheaper in supermarkets than what their distributors were asking. And subsequently their returns did not reflect the endless hours they were working. So they relinquished the lease.

“We met lots of nice people and had good rapport with our staff,” says Pat, recounting a fond era for Goulburn. “Margaret Staines and I are still really good friends.”

This is a well written article - these stores were full of interesting products and people and it's good to see these stories recorded for everyone to enjoy.

Linda Seaniger - 2 hours ago
Next they’ll be barring private traffic on Northbourne & Commonwealth bridge altogether whilst they extend the costly & out... View
News 318

@the_riotact @The_RiotACT
ACT Senior Australian of the Year and 50-year volunteer with @stjohnaustralia Valmai Dempsey wants mandatory #first-aid training for learner #drivers. She says it's a no-brainer https://t.co/Xovhw0Ec3H (33 minutes ago)