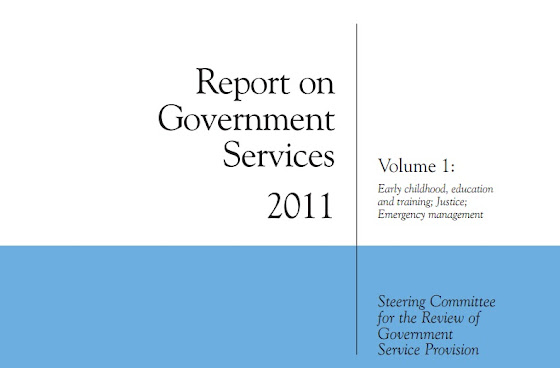 There’s a lot of chatter going on as a result of the Productivity Commission releasing its Report On Government Services for 2011.

Chief Minister Stanhope would like us to note the following points:

— the Alexander Maconochie Centre showed high performance in key areas, well above the national average, for prisoner education and employment;
— community perceptions of safety and of police integrity continued to be very positive, with the ACT performing consistently above the national average for a variety of indicators;
— ACT public schools had the second-lowest student-to-teacher ratio in the country at 12.7, compared with the national average of 14.0;
— ACT mean scores and the proportion of students performing in the high achievement level for reading, writing and numeracy in 2008 and 2009 NAPLAN were among the highest in the country and within the three highest performing jurisdictions for all year levels;
— the ACT had the highest year 12 completion rates of all jurisdictions;
— there was a marked increase in the number of full-time nurses;
— there was a significant improvement in the number of public hospital beds per capita;
— the ACT has the highest breast screening rates for Indigenous women in the country;
— the ACT has the highest life expectancy rates at birth for men and women; and
— the ACT is most efficient jurisdiction in the completion of child protection investigations, with 67.3% finalised within 28 days, more than double the national average of 33.2%.

Should the Liberals bestir themselves to comment we’ll let you know.

Is it just my inbuilt cynicism, or are all those dot points worded very specifically in a way that sounds like they’re covering up some other failing at the same time?

… and besides that, what have the Roman’s ever done for us? Nothing!

Alex Fulford - 3 hours ago
Elections of course, lol ya ain’t getting my vote 😂😂 View
Michelle Cooper - 13 hours ago
And some of us have both. View
Daniel Duncan - 14 hours ago
Julie because of Covid-19. Once it ends it will go back up. View
News 10

Scott Lang - 7 hours ago
I agree, Debbie. But I wonder how much attention the Chief Minister's request not to visit Canberra was given in Sydney? I th... View
Breaking 55

Chris Sant - 14 hours ago
Gladys is an absolute disgrace. Completely ridiculous to suggest that people who have been doing essential work in country Vi... View
Denise Bourke - 16 hours ago
Anne Cahill Lambert I keep waiting to hear that the poor Albury hoteliers have been given Covid quarantining status so that r... View
HiddenDragon - 18 hours ago
If there are arrangements that allow freight from Melbourne to travel through NSW to supply ACT and NSW shops, surely those a... View
News 77

Mike of Canberra - 14 hours ago
Well, let's see how their policies stack up as we progress through the election campaign. As for a rate freeze not being a po... View
HiddenDragon - 18 hours ago
If the yet to be debunked Stanhope/Ahmed diagnosis of the ACT's public finances is anywhere near the mark, whether we end up... View
Capital Retro - 19 hours ago
"That is a political game." And that is why Labor/Greens will win again and again and again.... View
News 6

@The_RiotACT @The_RiotACT
Police have renewed their calls to find Amara Hynes, 14, who has not been seen or heard from since 5:00 pm on Saturday at Jerrabomberra https://t.co/hQ4E3HaQJ3 (4 minutes ago)

@The_RiotACT @The_RiotACT
Enjoy the sunshine while you can because rains are returning to the region thanks to a low pressure system more than half the size of Western Australia https://t.co/FtL5r9NCOO (3 hours ago)