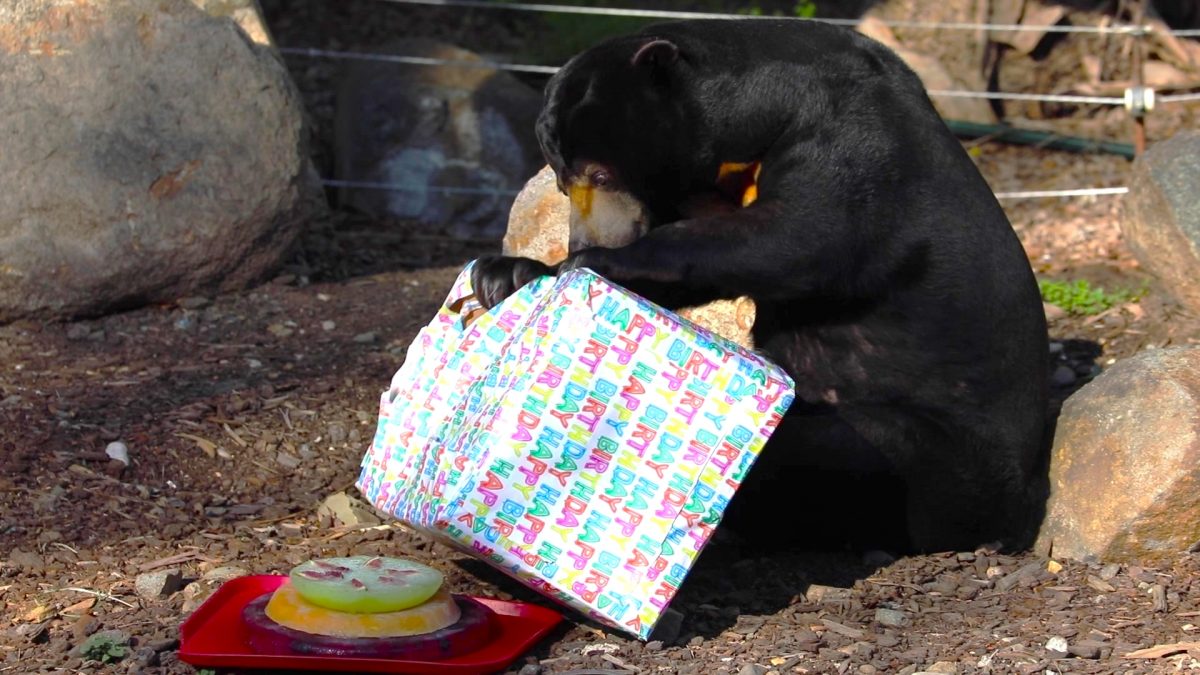 The day started with a platter of fruity treats and a colourfully wrapped box for Otay the sun bear. It’s her 18th birthday and this is only the beginning of her weekend-long party.

Visitors to the National Zoo and Aquarium can enter the draw for a one-on-one encounter with the birthday girl, provided they can find all the images of sun bears dotted around the place. But more importantly, the weekend is a chance to raise much-needed funds for other abused bears in South Asia.

Otay was born in 2004 in vastly different circumstances. According to keeper Leah Carnegie, she spent the first two years in an illegal bear bile farm in Cambodia.

“She was captured by poachers as a baby and kept in a tiny cage for the first two years of her life.”

It wasn’t until Australia’s champion bear campaigner came along that Otay was saved from a “fate worse than death”.

In 1993, Perth grandmother Mary Hutton sat spellbound in front of the TV as horrifying footage of bears held in coffin-sized cages chilled her to the core. Dirty catheters were inserted directly into their gallbladders, milking their bile for use in traditional medicines.

The next day, Mary drew up a petition and stood at the entrance of the local shopping mall, collecting thousands of signatures to help free these bears throughout Asia.

Two years later, the not-for-profit ‘Free the Bears’ charity went into illegal bear farms and liberated the bears inside, including Otay and her now 22-year-old male mating partner Arataki.

Both arrived at Canberra’s zoo in 2007 as vital cogs in the breeding program for the vulnerable species. Sure enough, within two years, a female cub was born.

“We named her Mary, after her mother’s saviour,” Leah says.

“The aim of this program is to keep the sun bear species alive, increase genetic diversity and help to protect their habitat through education and conservation programs.”

The ‘sun’ in the name doesn’t refer to the bright patch on the chest as you might think, but rather their natural habitat. Sun bears are found in 11 tropical countries throughout South-East Asia.

They are the smallest of the bear species, standing 145 cm tall, but have the longest tongue and longest claws of any bear (all the better for ripping logs and mounds apart and reaching the termites within). 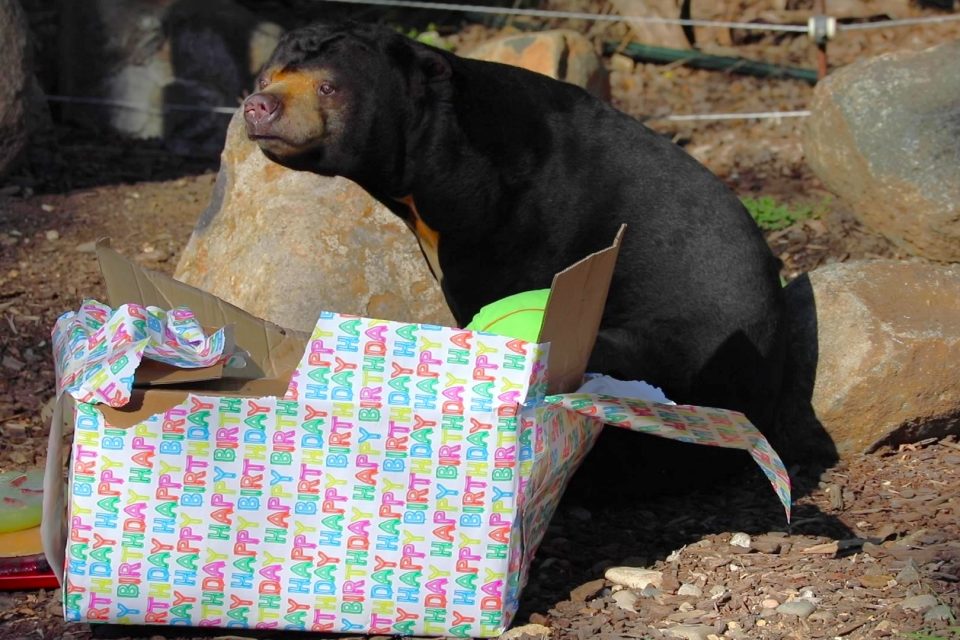 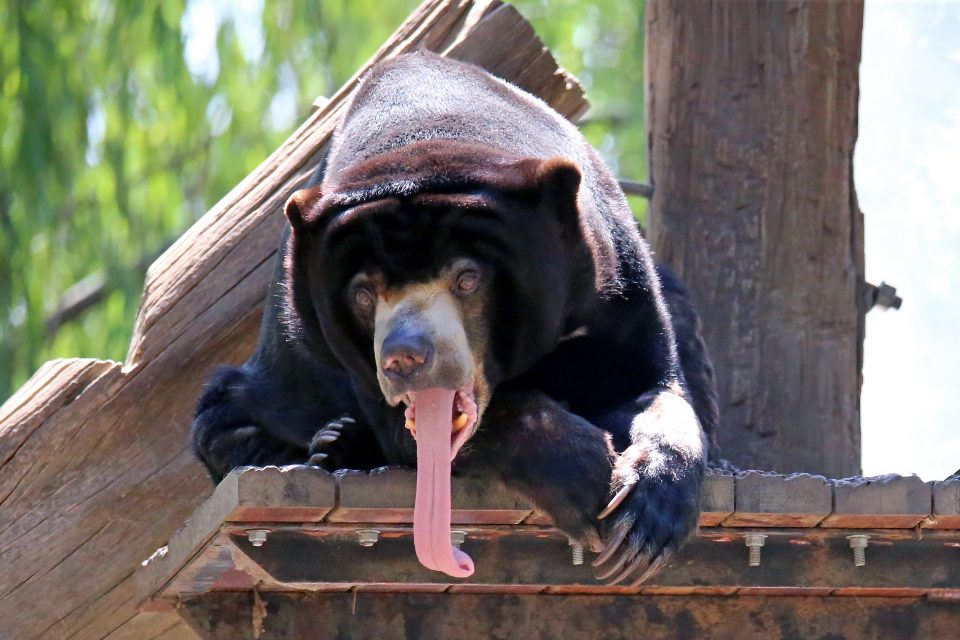 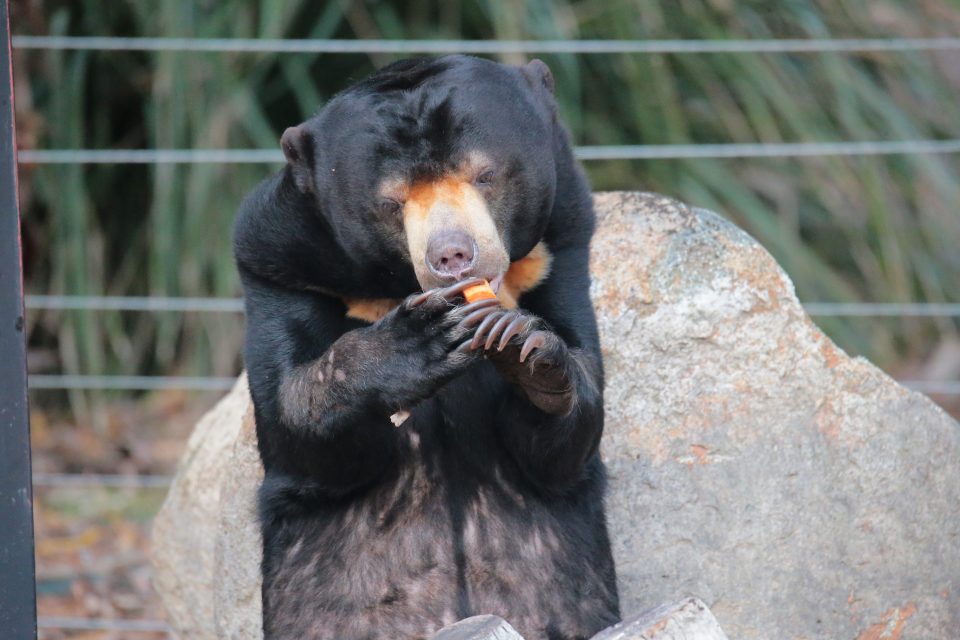 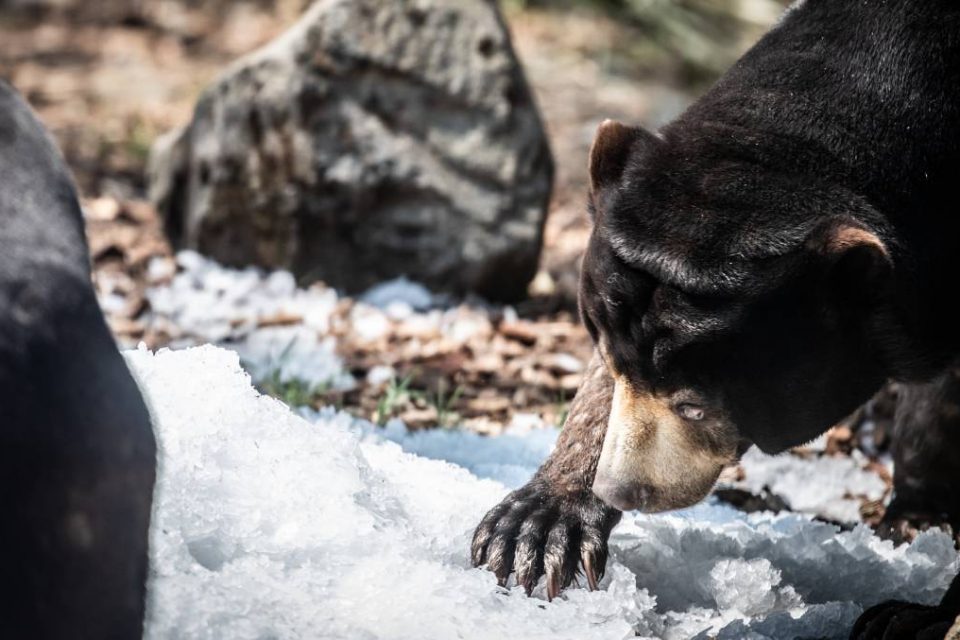 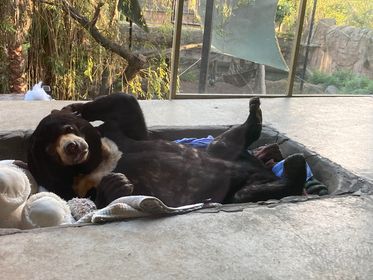 To replicate this, Leah says the keepers throw ‘enrichment balls’ into the enclosure a few times a day, packed with fruit, nuts and other bits of scatter.

“We also throw over things like cardboard boxes with goodies inside because they like to destroy things.”

Out in the wild, they are solitary animals, generally only coming together to mate. The female raises the young until one to two years of age. They typically live to 25 years old, facing risks from hunters and poachers and habitat loss due to deforestation. In the care of zookeepers, Leah says Otay can be expected to live to 30.

If you plan to go sun(bear) spotting for your one-on-one experience with Otay, you better be quick. The winner will be announced on Monday, 16 May.

And now she’s housed in a slightly bigger cage in Canberra. Not really something to celebrate 🙄🤦🏻‍♀️

Mia Irby – Have you seen her enclosure?! It’s enormous and lush with vegetation!
She was destined to ‘live’ in a cage the size of herself at the back door of a restaurant, hooked up to tubes draining her bile (for soup 🤮) and then inevitably her paws would have been cut off one at a time to provide more ‘delicacies’. That would have been better?? Would you have left her there??

Mia Irby she could never have been released and so being in a top class facility with keepers who have her best interests at heart seems like more than a halfway decent way to live. I’m sure you’d agree Paige Louise Smith 🐾

Mia Irby I work with Otay! And I can ensure you she is treated like a princess. She has an enormous enclosure. She isn’t locked up if she doesn’t want to be. She gets fed 5 times a day with special snacks. She gets toys and enrichments 5 times a day

She gets medicine for her joints and any other issues

She is very happy

So just don’t even bother 🤣

Love this beautiful girl.
such a funny little thing😂🐻