An artist’s impression from the DA of the two-tower development approved for 15 Bowes Street.

The future of the Woden Town Centre is looking up with the approval of a two-tower, 430-unit, mixed development in Bowes Street next to the bus interchange and proposed light rail terminus.

One tower is 26 storeys and the other 18, with the development replacing the Medibank building at 15 Bowes Street.

The original proposal was for 25 and 16 storeys and 448 units. Other changes include more groundfloor retail space along the southern frontage of the building to interact with future pedestrian movement between Callum Street and Woden Town Square.

Height limits under the recommended Territory Plan Variation 344 do not affect the development because the DA was lodged before 344 took interim effect and there are no prescribed height limits for the site under the Phillip Precinct Map and Code.

The Notice of Decision says that any winter overshadowing of the Woden Town Centre would be minimal, with any additional shadowing from the two towers “diminishing to a very minor effect up to 10 am”.

The so-called ‘transit-oriented’ development from Zapari Group, will only have 363 spaces in the basement parking area but is considered adequate given the proximity to the interchange and the light rail terminus Transport Canberra has proposed for Callum Street. There will also be 494 bicycle spaces. 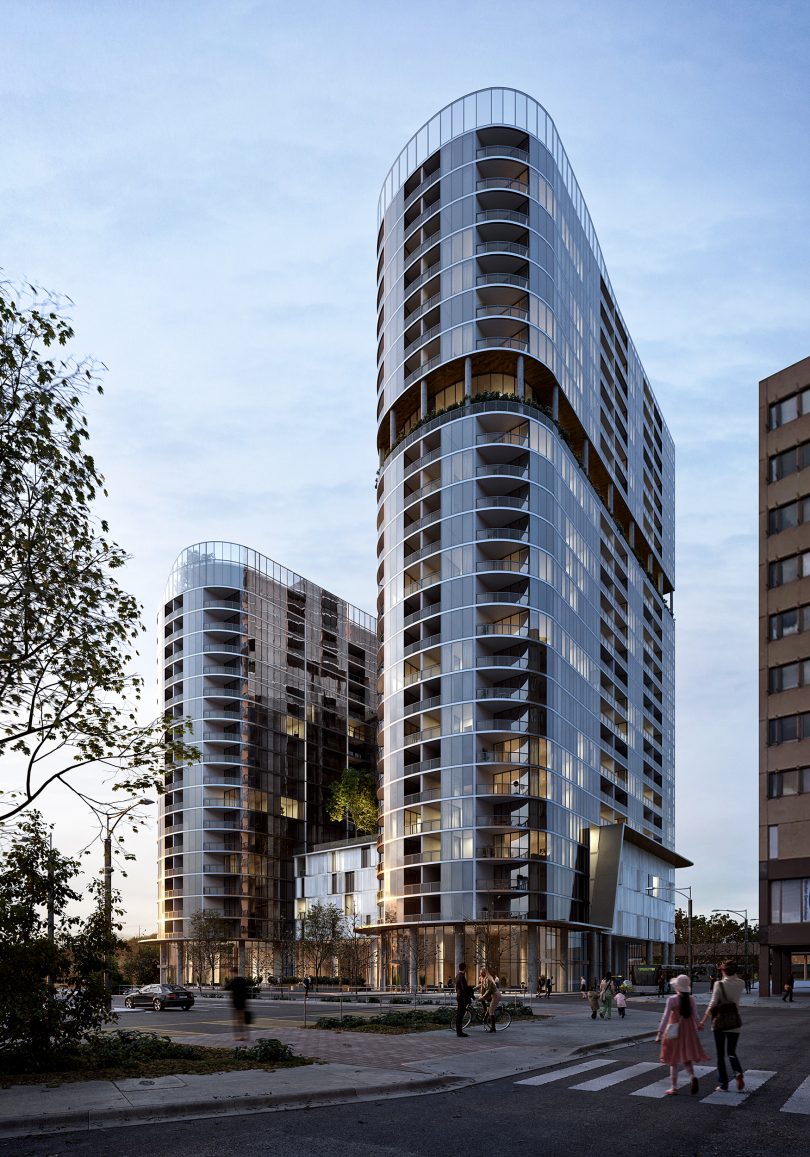 The Notice of Decision noted that “the need for residents, visitors and commercial employees and customers to rely on a motor vehicle is significantly reduced”.

The Traffic Report said that the road network would be able to cope with the extra traffic generated by the development.

The Woden Valley Community Council said it welcomed densification and the new residents this development would bring to Woden but remained concerned about the impact on the public amenity, and the lack of community facilities and services from which the area continues to suffer.

“We want the community to be considered, and our public amenity and our community facilities to be balanced with densification. We can have both,” WVCC president Fiona Carrick said.

She said the siting of residential towers on the northern side of the east-west pedestrian link meant overshadowing on the area’s public spaces.

When buildings up to 28 storeys go up on the Woden Town Square frontage “where is the sun coming from?”

The WVCC wants a plan to coordinate “where our public spaces, community facilities and residential towers will be to ensure Woden is a place that people want to
be.”

The WVCC wants densification to be done well. Why can’t we have more residents in Woden and pubic spaces and cultural and recreational facilities, other places can manage to do it.
Banagaroo – a 22 hectare development of international design excellence, more than half of Barangaroo will be dedicated public space encompassing a 2km continuous harbour promenade, expansive parklands and outdoor entertainment areas, extraordinary public art and cultural programming.
Civic – The City Renewal Authority is leading the transformation of the city renewal precinct and is charged with shaping the growth of the central parts of Canberra to make it a great place to live, explore and enjoy. In partnership with the community, the City Renewal Authority aims to create a vibrant city heart through the delivery of design-led urban renewal with a focus on social and environmental sustainability.
Woden – blanket planning for high rise residential towers, up to 28 storeys, from the demolished basketball stadium to Hindmarsh Drive (including around the Callum Offices). Car parks to be sold to developers to undertake densification. No identification of public spaces or cultural and recreational facilities.

I can see both sides. Woden is losing outdoor space very close to the CBD. The parks and ovals are farther out, so the inner core loses the softening that other places like Dickson have.

Alternatively, ultra-high density in the core moves Woden ahead decades or generations in the space of a single development, so that the entire stretch of parking lots along Callam can eventually do so too. This relieves pressure on far-flung green release (environmentally catastrophic and expensive) and also eases pressure on infill across other inner suburbs.

It would be nice for there to be some thought given to a radius of nearby amenity for high-density, where say 20% of ACT rates would be spent on upgrades/improvements initially, reducing by 2% per year to 6% within 7 years and staying there. We’re already talking about making portions of budgets open to community control. Why not bolt that onto the most contentious issue (density) as a way to help the “losers” still deliver a win for their communities?

How about we do something about those abandoned buildings on the other side of the town centre first? Before we add yet more to the mix..?

Doma Group said that they will do an adaptive reuse of the buildings into apartments . When I don’t know

I’m more interested in how the developer will get the finance given they have not built anything yet and no experience in high rise construction!! Their website states that they have ‘ a focus in prestigious high rise residential’ yet no completed high rise developments!

Just announced Joint venture with … you guest it Geocon. Called Grand central towers! So there is a reason why they share offices in Fyshwick. http://www.canberratimes.com.au/act-news/zapari-and-geocons-grand-central-towers-development-approved-for-woden-centre-20180131-h0r0u0.html

In reference to the new word “inject”, this is a very common phrase used in the unit construction industry. It relates more to gap-filler of which there are copious amounts being used, mainly post construction.

Gee, it looks very much like James Packer’s casino development at Barangaroo in Sydney.

Meanwhile, still no progress on Alexander and Albemarle and the vacant space next to Aviation House

How many more of these developments can Canberra sustain? Come on ACT Government ,,, start some real city wide planning and think about some more AFFORDABLE housing options.

COMMON MAN! I just need another 430 units of residential living spaaaaace. I can pay you back Wednesday man!